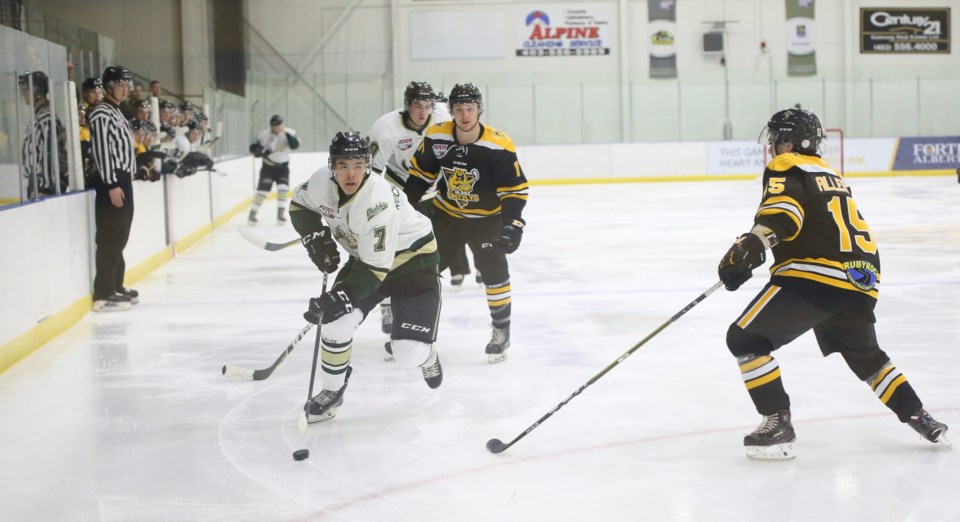 Ayden Roche-Setoguchi will serve as captain for the Okotoks Oilers in the 2019-20 season. (Remy Greer/Western Wheel)

To say the Okotoks Oilers latest captain’s road to wearing the letter is atypical would be an understatement.

Two trades and one serious injury and surgery later and Ayden Roche-Setoguchi’s quixotic journey to captaincy is complete as the undisputed leader of the Oilers for the 2019-20 Alberta Junior Hockey League season.

“It’s a huge honour being named captain,” Roche-Setoguchi said. “It’s a huge responsibility and I’m just super thankful they trust me enough to give me the letter and hopefully I can do a good job towards leading the team to a championship this year.”

The relentlessly positive Roche-Setoguchi characterized his leadership style as vocal and leading by example along with being friendly and social with everyone on the squad.

“He’s a glue guy that brings the whole team together,” said Oilers associate coach Kyle Schussler. “To have that optimism all the time and make sure the vibe in the room is positive is always a good thing. He’s a guy that can pull guys in and make sure the team sticks together.”

That optimism was put to the test during a trying 2018-19 season.

After storming out of the gates with 10 points his first 16 games, Roche-Setoguchi was sidelined with a season ending injury and forced to miss the final 44 games of the regular-season and all of the playoffs.

“It sucked a lot. I wanted to play bad. Watching the games, I wanted to be with the guys and go to battle with them, but I couldn’t,” Roche-Setoguchi said. “I worked hard on the rehab and all the guys were great with me and made me feel like part of the team still.”

An MRI one month after the injury revealed the need for surgery and put a premature end to the blueliner’s third junior season.

Following six months of grueling rehabilitation, done primarily in the Stampede City with physiotherapist Lisa White, the Calgarian was given a clean bill of health in the summer.

“It took a long time, it didn’t seem like it was moving too fast,” he said of the rehabilitation process. “It was a lot of waiting around and taking it day by day, but it paid off for sure.”

Being nearby in Calgary allowed for the defenceman to workout with the Oilers coaching staff during the summer months where his progress was immediately apparent.

“His character is through the roof, he’s such a fantastic guy,” Schussler said. “He works super hard, he’s dedicated to the game and wants to get better and is looking forward to this year.

“His strength is building, he’s ready to go and he’ll be a great leader for the team.”

Entering the league as a smooth-skating, puck moving defenceman, the 20-year-old has evolved into a well-rounded rearguard.

“You can just see how his confidence has grown,” Schussler said. “He was a 17-year-old kid when he first got into the league and he was just getting his feet wet, trying to find his way with things and could be a little tentative at times.

“He takes a lot more control now. The confidence is there, he moves his feet really well, he’s a great skater, he’s got a great first pass and can jump into the rush and he’s not afraid out there.”

Roche-Setoguchi has shown an increasing appetite for physicality.

The defenceman was hard to miss during training camp with a number of crushing open-ice hits in scrimmage action.

“I always try to play a little physical, it gets me going,” he said. “It pumps the team up a little bit once you get a big hit in there. It’s an important part of our culture, to be physical on guys with aggressive play.

“I’m one of the older guys now so I should be able to throw my weight around a little bit out there.”

Roche-Setoguchi was in and out of the lineup in his first season in Big Rock Country and saw time as a forward.

It’s a lesson in adversity he can now share with the newcomers to the green-and-gold.

“I learned a lot from guys like Carson Beers and Jordan Davies, they showed me the ropes,” Roche-Setoguchi said. “Now it’s my job to pass my knowledge onto the younger guys.”

The defenceman spent his sophomore season with the Calgary Mustangs and was reacquired via trade by the Oilers in the 2018 off-season.

Not exactly the most common route to captaincy, but one Roche-Setoguchi navigated with his trademark ear-to-ear smile.

“It’s a huge testament to his character,” Schussler said. “There aren’t a lot of guys who might be able to do some of the things that he has in that sense, it’s amazing to have him in the organization in the spot that he is right now.”

Roche-Setoguchi expects to have a lot of help on the leadership front with the likes of Marc Pasemko, Louis Jamernik, Zane Kindrachuk and Eric Parker returning to the fold.

“I think it will be pretty easy,” he said. “We’ve got a lot of good leaders. Marc’s back, Louis, Kinder, Parker, we’ve got a good second year group coming in.