Okotoks Dawgs fans will once again have to show some true grit and get up and dance La Macarena four or five times a game this year.
May 22, 2019 12:23 AM By: Bruce Campbell 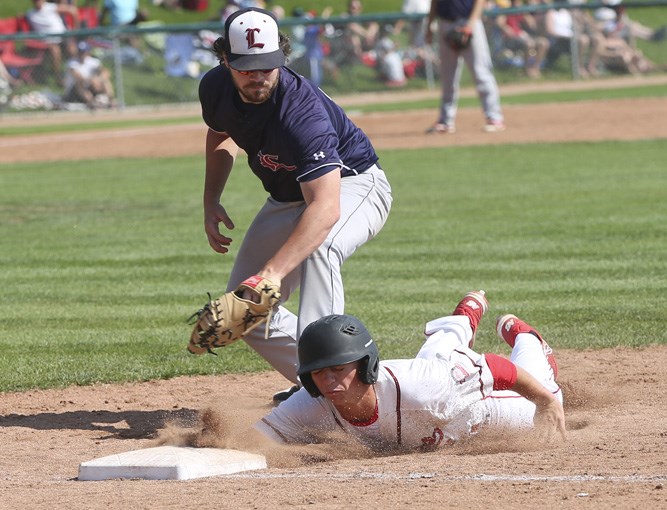 Okotoks Dawgs infielder Richard Mascarenas, here sliding back into first base, will bring his true grit back to Seaman Stadium for the 2019 WCBL season.

Okotoks Dawgs fans will once again have to show some true grit and get up and dance La Macarena four or five times a game this year.

That’s due to Richard Mascarenas, the Dawgs’ 2018 True Grit Award winner, returning for his second season in the Western Canadian Baseball League in Okotoks.

“Yeah, I am going to do the same walk-up song,” said Mascarenas, who chose the fast-moving La Macarena. “My host family loves it when it comes on.”

The hard-playing infielder hit .329 with 17 RBI, one dinger and an on-base percentage of .391 in his inaugural season with the Dawgs in 2018. He covered nearly the entire infield playing second, short and third for the Okotoks 9.

“It was really special to win that award, I go up there and I worked hard and it was great to be noticed,” said Mascarenas, from Albany, Oregon. “I always went out and played 110 per cent and that’s all the coaches wanted from me.”

He enjoyed moving around the infield.

“I like moving to the other positions, it gave a little variety,” said Mascarenas, the Las Vegas native. “It’s fun to play a different spot now and then. I will play wherever they need me.”

The successful season translated into more success with the Linn-Benton Community College Roadrunners in Oregon. He hit .315 in the regular season this spring for the Beaks.

“I’m starting shortstop and hitting second, bunting is the best part of my game,” Mascarenas said. “Playing with the Dawgs gave me a lot more confidence, knowing the coaches trusted me and playing with guys like Eddie Sanchez gave me a lot of confidence.”

It was Roadrunners head coach Andy Peterson, Dawgs infield coach, who got the versatile player to Okotoks.

“He asked me and it was a no-brainer — I said yes,” Mascarenas said. “One of our pitchers played the year prior to me, he told me about it and Petey told me everything. It was an opportunity I did not want to pass up.

He and Peterson have spread the word, there are currently five players from Linn-Benton on the Dawgs’ unofficial 2019 roster.

Although winning a post-season trophy is nice, Mascarenas would trade it in a heartbeat for a championship ring. The Dawgs made their fourth-consecutive first-round exit in 2018 — the last three at the hands of the Edmonton Prospects.

“Our goal is to go out there and win — it’s been in the back of our minds that we have been out in the first round,” Mascarenas said. “I think that fire is just going to drive us. Winning the league is that first goal and then winning the first round and going on from there.”

The Dawgs open the season on the road when they take on the Brooks Bombers on May 28. Their home opener is May 31 when the Prospects come to town.