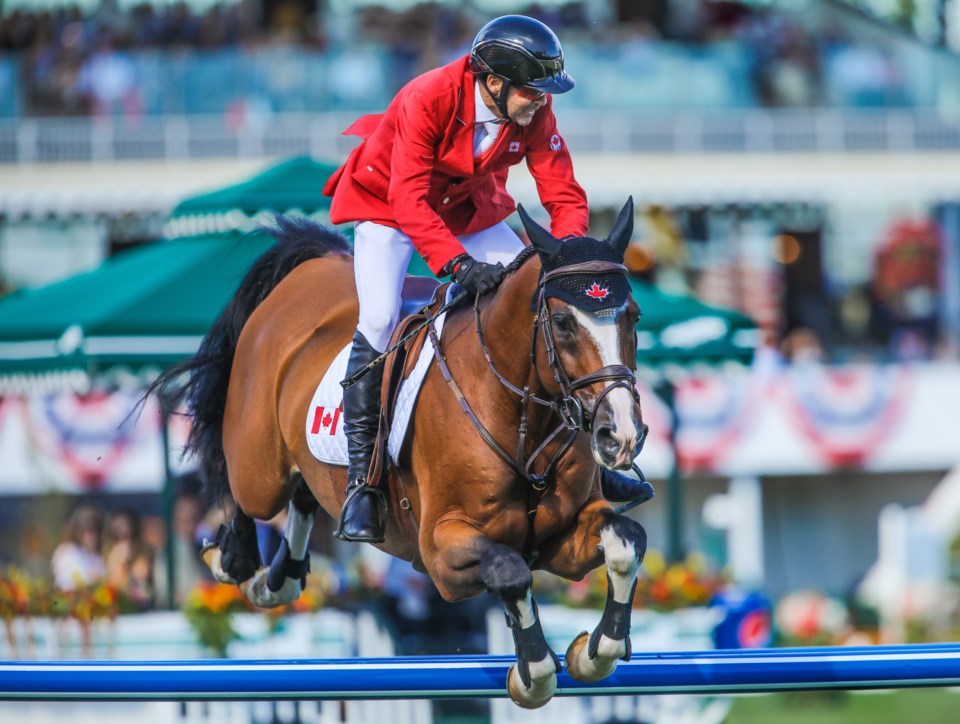 Canadian legend Eric Lamaze clears a jump during the 2019 Masters Tournament at Spruce Meadows. The 2020 event has been cancelled due to the COVID-19 pandemic. (Brent Calver, Western Wheel)

The last of the five major summer events is officially off the docket at Spruce Meadows.

One of Alberta’s most popular late summer events will be sidelined due to the COVID-19 pandemic with Spruce Meadows calling off the Masters Tournament in September.

“This decision is made with heavy hearts and an acute awareness of the significant ripple effects,” the Spruce Meadows release stated. “Our flagship ‘Masters’ Tournament was scheduled to be a best ever edition in 2020. Highlights were to include the world’s best horses and riders competing at the biggest tournament in show jumping, wonderful shopping, exhibits and entertainment programs.”

Events around the event were to include the popular Fire Fit, World Blacksmith Championships and RCMP Musical Ride.

On the perfectly manicured pitch, the Masters features the top show jumpers in the world competing for both individual and national glory in elite competitions such as the BMO Nations Cup and Suncor Energy Winning round.

Spruce Meadows had previously cancelled its summer series events including the National and North American competitions slated for June and July, respectively.

The Masters, held the second weekend of September, is on another level and regarded as the marquee event in the sport and at the state-of-the-art sports facility in Foothills County.

The economic impact on the cancellation of the Masters and all of the summer events is significant, according to the Spruce Meadows release.

“Spruce Meadows, by way of its insights into recent third party economic impact studies, fully understands that by cancelling its five Spruce Meadows show jumping tournaments, there is a wide spread economic impact,” the release stated. “This is particularly true as it relates to the 560 full-time jobs, the $45 million in wages and the nearly $90 million in tourism related economic activity that are attributed to the Spruce Meadows International Show Jumping season.

“We will dearly miss engaging with the nearly 500,000 fans -- mostly Albertans -- that make Spruce Meadows part of their summer and fall each year.”

The Cavalry, led by gregarious gaffer Tommy Wheeldon Jr., entered the season as one of the favourites after posting the best record during both the spring and fall seasons before falling to Forge FC in the inaugural one-game championship match in November.

“Despite our best efforts, we are now having to make adjustments to our operations including the wages of our hard working and passionate players, coaches and employees,” said CPL commissioner David Clanachan in a league release.

“Players will have 25 per cent of their contracts deferred, while coaches, technical staff, and club and league employees will take wage reductions during this challenging time in order to keep as many people as possible employed.

“We thank our dedicated players, coaches and staff for helping us share the weight of these difficult challenges,” Clanachan added. “And we look forward to starting our season and welcoming back our amazing fans when authorities say it is safe to do so.”

For more information go to sprucemeadows.com.