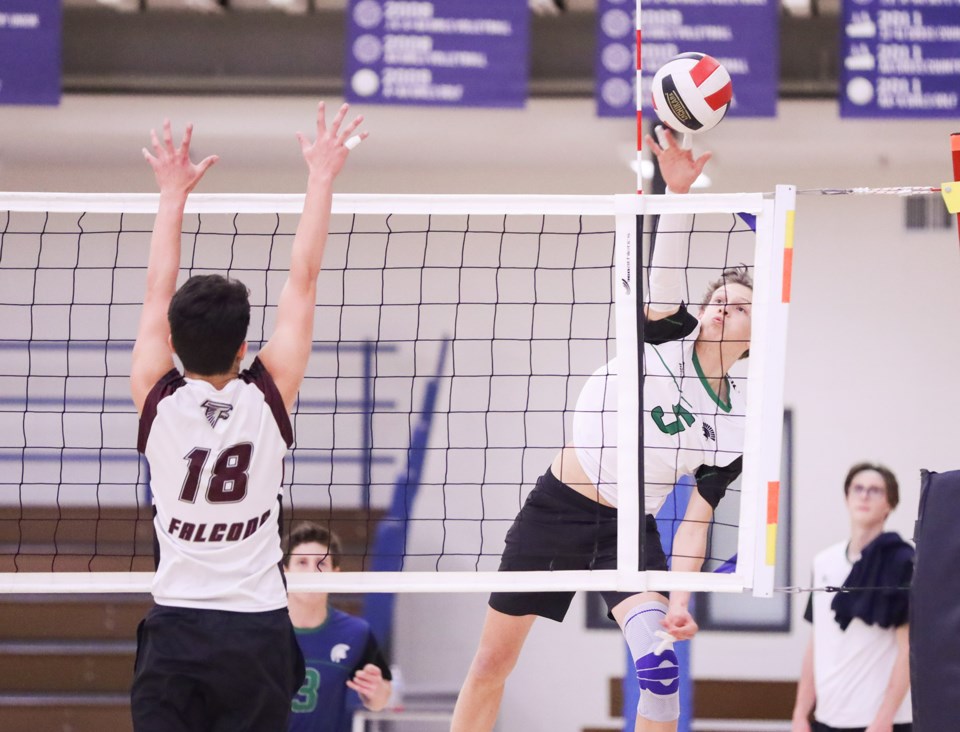 The Strathcona-Tweedsmuir Spartans have developed a habit over the past two years.

“It’s pretty awesome — last year was the first time we won it in 18 years and to win it back-to-back for us, especially for us Grade 12s it is a great experience,” said Spartans co-captain Jared Klotz.

STS head coach Dale Roth said the close scores were indicative as to how well the teams played.

“Tonight was all about great volleyball on all sides,” Roth said. "Set 1 was a bit slow, but after that I thought both teams played well.”

All good things will come to pass.

“Set 1 was definitely a low spot for us, but we figured out what we had to do and we got our momentum going again,” Roth said. “We just needed to pass that ball, to get that first contact up so we can get our offence going.

“We have a strong offensive team, but we weren’t getting to that.”

If the Spartans can get the ball up, they have plenty of weapons from various directions.

“If we can get that ball up, it doesn’t necessarily have to be to our setter,” Roth said. “We work a lot of things that are out of system. We can hit off of pretty well anything.”

“We weren’t that confident, a lot of things didn’t go our way and our passing just wasn’t there — I think everybody was a bit jittery,” Pierce-Lord said. “A lot of turning it around was energy, celebrating when we do well. Just focusing on the next point and not thinking about the mistakes.”

Falcons head coach Ryan Hogan said his squad made some mistakes after a strong first set.

“We came out and played well, attacked the ball aggressively and got STS on their heels and rolled with it,” Hogan said. “Our defence hurt us tonight, we didn’t commit defensively and they (STS) game planned us well after that.

“They made some smart shots and we never got the momentum back.”

The Falcons will learn from their mistakes as they prepare for the 4A South Central zones, which they host next week, said Foothills captain Nolan Edwards.

“Tonight we started to play as six individuals, we weren’t lifting each other up anymore, and it just all fell apart,” the big hitter said. “(For zones) we have to find someone on the court, tell him, you’ve always got their back and we have support for each other.

“I think we will do great next weekend.”

The other teams competing at the 4A zones are the Holy Trinity Academy Knights and the Chestermere Lakers.

Meanwhile, the FAC banner is just one step of the Spartans’ season goal. The Spartans are hosting the South Central 2A zones Nov. 15-16.

“We have a vision board that we set this year – goals,” Roth said. “Zones is on there, but provincials is also on there.

“After two bronze medals the past two years, the boys really want to better that.

“That is the ultimate goal… The boys have set their goals pretty high.”

“We’re trying to push for provincials,” he said.