Spartan one step closer to FIFA U17 World Cup 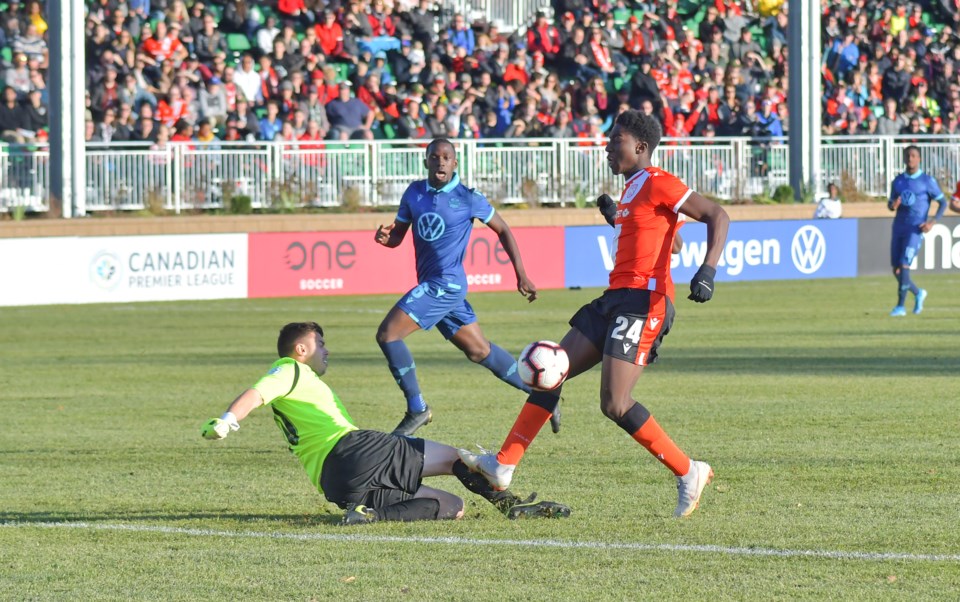 Cavalry FC's Aribim Pepple, right, fires a shot on goal versus the HFX Wanderers. Pepple, a Grade 12 student at Strathcona-Tweedsmuir School, was named to Canada's U17 camp roster in advance of the FIFA U17 World Cup in Brazil. (Mike Sturk/CPL)

What a difference a year can make.

Strathcona-Tweedsmuir School Grade 12 student Aribim Pepple has capped a meteoric rise in soccer being one step closer to earning the national cap after being named to Canada’s camp roster in advance of the 2019 FIFA U17 World Cup just weeks removed from his professional debut with Cavalry FC.

“This time last year I was with the U17 Foothills team playing club soccer in Calgary preparing for nationals,” said Pepple. “That was the big competition for me back then. I guess my career has just taken off since then. It’s just been amazing to see how God works.

“Sometimes I want to get the chance to sit back and reflect, really I haven’t got the chance.”

There’s been little opportunity to stop and smell the roses for the burgeoning soccer star, balancing his studies as a high school senior along with professional soccer and national soccer aspirations.

“It’s been my teachers who have helped me balance everything,” Pepple said. “I took a course online in the summer, so I have a spare and can afford to be away longer.

The attacker enjoyed a breakthrough season with Foothills FC in the USL 2, scoring five goals in five games along with eye-catching performances, earning his signing with the Canadian Premier League’s Cavalry FC in August.

“I was told that if I go play USL and real men’s football they will be keeping an eye on you and seeing how you develop so I always knew it was attainable,” Pepple said. “Near the end of the USL season when I started scoring my goals and started playing really well, that’s when I started to hear a bit of talk that I might have a chance with Cavalry.”

Pepple was quick to credit his coaches for setting the stage for his ascension, the likes of Scott McGeoch, Jay Wheeldon and Foothills FC head coach Leon Hapgood.

“(McGeoch) we met in U15 and at that time I was kind of up and down, inconsistent and he just always kept faith in me,” Pepple said. “I got dropped from the provincial team my second year and he told me to keep going, it would be all right.

Ironically, Pepple got the good news over the phone while discussing the recent call-ups CPL players have earned. That list includes Cavalry teammate Marco Carducci and FC Edmonton defender to Amer Didic to the senior national side.

Pepple, who trained with the Canadian U17 squad in the summer prior to joining the Cavalry, expects his last two months of work in the CPL to be a major boon to his hopes of cracking the final roster in Brazil.

“They said they were watching a couple of my games and heard a few good things about me,” he said of the initial call-up. “I was a bit nervous at first, but all the boys from different clubs treated me as one of their own. I still talk to all of them now, it was a really good experience.”

Pepple is the lone Alberta-based player on the 23-man camp roster heavily populated by players from MLS academies out of Vancouver, Montreal and Toronto.

The Canadian camp runs from Oct. 11-22 in Argentina. Canada opens the U17 World Cup on Oct. 26 against the host Brazil followed by matches with Angola and New Zealand.

“There’s a couple more cuts to be made, everyone is still fighting for their final spot,” Pepple said. “When I went to my first camp I was nervous, I hadn’t been training with Cavalry and felt still a bit of jitters.