There’s nothing like a good night’s sleep after a hard day’s work. Especially if that hard work is running more than a 100km a day to raise money in your son’s name.
0
Jul 3, 2018 3:31 PM By: Bruce Campbell 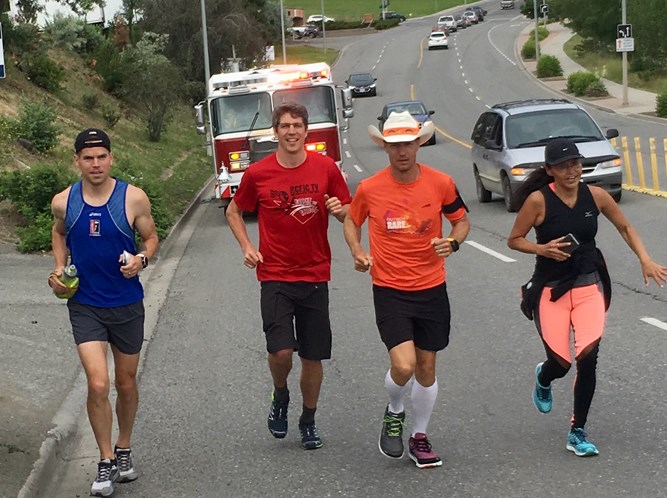 David Proctor received an escort when going through Kamloops, B.C. on June 30 en route to running from Victoria, B.C. to St. John’s, NFLD in his effort to raise funds for the Rare Disease Foundation. He is expected to be in Calgary on July 7.

There’s nothing like a good night’s sleep after a hard day’s work. Especially if that hard work is running more than a 100km a day to raise money in your son’s name. “I am feeling better now — I had a rough go at the beginning,” said David Proctor on Monday, Day 5 of his Cross-Canada run. “I didn’t quite understand or calculate how much anxiety there was going into something like this. I haven’t been sleeping very well.” He started his journey to St. John’s, Nfld. on June 27, when he dipped his specialty built Smithbilt cowboy hat in the Pacific Ocean at Victoria, B.C. If he’s anxious, it’s understandable. Proctor is attempting to run across Canada — about 7,200km — in less than 72 days to break Al Howie’s 1991 record. His main goal is to raise $1 million for the Rare Disease Foundation. Proctor’s son Sam, has a rare disease that affects his balance and mobility. Proctor was literally on the run during an interview on Monday about 9 a.m. MST, average about a 6:20 a kilometre clip as he was about eight kilometres from Sicamous. As he heads toward Alberta, he has put the Coquihalla Highway in the rearview mirror. “The Coque is a bitch,” Proctor said. “It is big climbs, I ran more conservatively on them, which I am happy with, but for the last two days, in the understatement of the century, I have been sleep deprived.” He stopped a bit early on Sunday and the Sandman caught up to him. “I slept for about 12 hours and boy, did I need that,” Proctor said. “Sleep deprivation is something that will stop you right away in this sort of thing and we decided as a team to get hold of that.” He was bright-eyed and bushy-tailed on Monday and rarin’ to go as he headed down the highway looking for adventure. It was a tough stretch of highway as he neared Sicamous, often clinging to the guardrail to make sure he is out of the way of trucks in a hurry to make it to the next trip. Getting him through it is his travelling partner, Wayne Gaudet of Okotoks, a world-champion ultarmarathoner for his age group. “Wayne and I have gotten into a great groove,” Proctor said. “Boy, he knows exactly what he is doing. It took us a couple of days to get dancing properly, but he is efficient. “He projects what you need in advance… He’s going to be integral about the success of this event.” Although facing mountains and a few more provinces before getting to St. John’s, Nfld. later this summer, Proctor is upbeat. “I’m very optimistic,” Proctor said. “I need to find my groove and I think I found it last night.” Proctor is expected to hit Calgary on July 7. A fundraising 5km fun run with Proctor is scheduled for July 7 at 3 p.m. at the Staples on 130th Avenue. SE in Calgary. A barbecue and formal presentations will follow at 4 p.m. For more information go to outrunrare.com bcampbell@okotoks.greatwest.ca