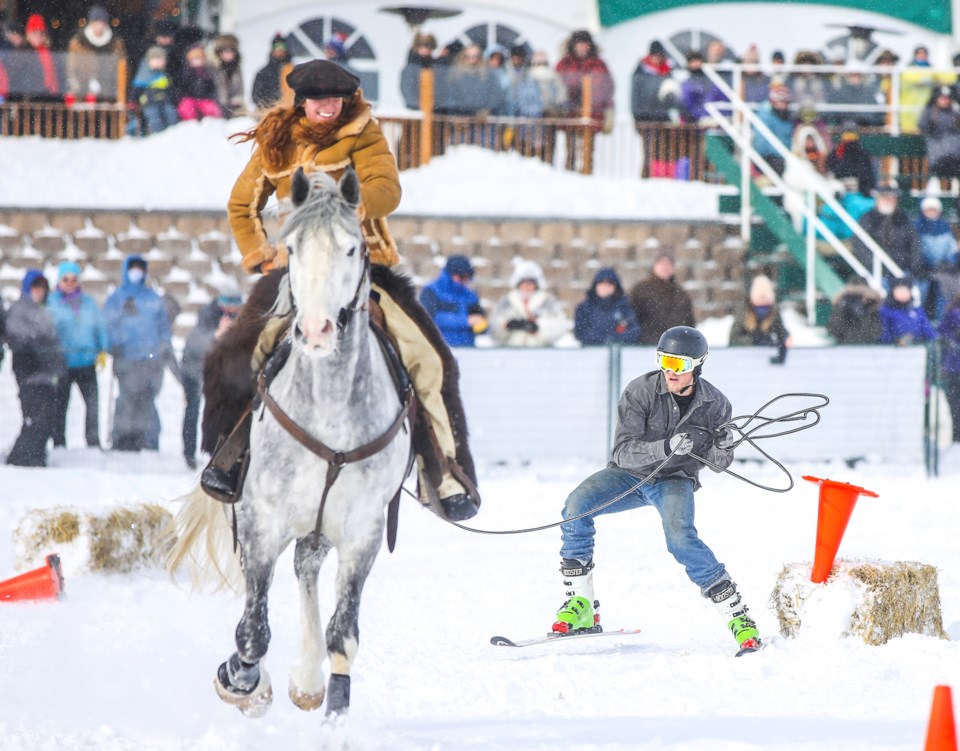 Foster Kennedy swipes a pylon in the circuit being pulled behind Taylor Bland atop Boy Wonder during Skijordue 2019 at the Calgary Polo Club as last year’s event. The 2020 Skijordue event is Feb. 22 in Millarville. (Brent Calver/Western Wheel)

One of the most unique sports and cultural events to come out of the Foothills is on the move.

The fourth annual Skijordue event, held on Feb. 22, will be out of the historic Millarville Racetrack for the first time after operating successfully and building a cult following out of the Calgary Polo Club for three years.

“We love the Polo Club, they’ve been fantastic, but in order to have an indoor space for the Maker’s Market and permanent grandstands Millarville really made sense for us,” said Skijordue organizer Sam Mitchell. “That’s my home track and we like to keep things local and we’re actually co-fundraising for Prairie Sky Equine again this year and also for the arena rebuild project at Millarville.”

Since launching in 2017, Skijordue has grabbed a foothold in the Foothills with its combination of alpine and western culture. The event has skiers or snowboarders pulled by horses and competing in a range of disciplines along with a fashionista, foodie and après ski culture that has brought out the masses.

“We’ve doubled our attendance each year,” Mitchell said. “We’re set up for 4,000 people and we’ve got a team flying in from Ireland, all of the guys who were trick jumping at Banff (Snow Days Winter Festival).

“We filled out our entries in like five hours, it’s crazy.”

This year’s version features 150 competitors over all four events — circuit, relay, sprint, jump — along with the return of the fan-favourite lounge race.

“It’s a slightly different set-up because we don’t have the field, we’re on the track so we will be running four abreast – but still the drama of all the horse out there together,” Mitchell said. “This year we’ve added a style option to the long-jump so you an choose distance or style, for all of the guys who want to huck a 360 over that.”

For the spectators, the Wildrose Yodeling Club will be coming down to perform, for foodies there will be signature fondue, poutine from Waffle & Chix food truck and bratwurst from High River’s Burgardt’s Butcher Shop.

There is also a Maker’s Market and prizes up for grabs for not only the competitors, but for those dressed to the nines as well.

“They can expect a crowd that is totally skijor-styled,” Mitchell said. “People are posting all over social-media about vintage stuff they’re finding, stuff they’re making and augmenting and it’s really become a total style-fest.

“Everything from 70s spandex to Marlboro Man shearlings, fringe, fur, it’s just gone nuts and we still have our best outfit awards in the three categories.”

The gates open at 10 a.m., followed by the opening ceremony at 11 a.m. with the competition running up until close to 6 p.m. From there the après ski party kicks off and is followed up by the official after après ski party being hosted at Ranchman’s.

“We’re running a bus from Ranchman’s and back to, we will probably shut down around 8,” Mitchell said. “That bus leaves at 7 and takes everybody into town.

“We’re just trying to make it really easy for everyone to be safe and have a really fun day.”

As always, getting the event up-and-running is a community effort with a ton of volunteerism and loyal sponsorship behind Skijordue.

“The great thing about Millarville is it doesn’t get the wind so it holds snow better and it tends to be a couple degrees colder down there in the river valley,” Mitchell said. “We did stockpile some snow, we plowed and made some big piles to pull from for obstacles.

“Millarville has been really great in terms of letting us keep that course cordoned off so that we’re not disturbing the snow cover there. They’ve been really collaborative with us in terms of making this event happen and we’re very grateful for that.”

Tickets for Skijordue 2020 can be purchased online for $15 at skijorcanada.com or at the gate for $20.