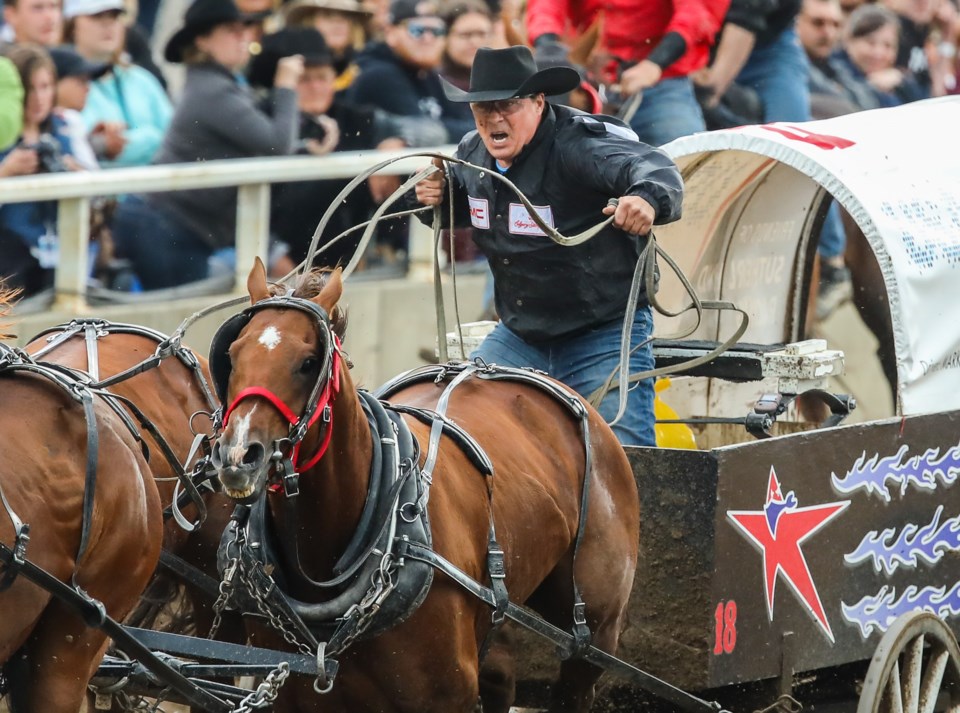 Okotoks area's Mark Sutherland, here at the 2019 Calgary Stampede, is angered with the cancellation of the 2021 Rangeland Derby. (BRENT CALVER/Western Wheel)

A chuckwagon driver known for his safety at the Calgary Stampede, has had the reins pulled in on his preparation of horses for the most important and lucrative event of the season.

Okotoks area’s Mark Sutherland and 26 other drivers had their trip to the Greatest Outdoor Show on Earth cancelled by the Stampede on May 27.

“We didn’t see this coming,” said Sutherland. “We have an issue with the Calgary Stampede media release suggesting that I (and other drivers) might bring a team of horses to the 2021 Calgary Stampede this year and they wouldn’t be healthy to compete.

“And I take offence to that, plain and simple. I won the safe-driving award three times. To suggest I would bring horses not fit to race… Their media response makes us feel like we wouldn’t look after the health and the safety of the horse.”

Sutherland has been training his horses for weeks.

The Stampede was cancelled in 2020 due to the COVID pandemic. However, last week the Stampede announced it would run a scaled-down version of the Greatest Outdoor Show on Earth, July 9-18.

While the rodeo is on the schedule, the Stampede silenced the horn that starts the Rangeland Derby.

“As a result of pandemic-related impacts on the 2020 and 2021 chuckwagon racing season across western Canada, the Stampede will not be able to present the Rangeland Derby as part of the 2021 Evening Show,” a press release from a Stampede spokesperson stated on May 27. “We look forward to the thunder and thrill of the chuckwagon races returning in 2022.”

The release also stated: "The safety of our community is first and foremost as we continue to plan for the 2021 Calgary Stampede."

In an email interview, Stampede spokeswoman Kristina Barnes said it was determined there was not enough time leading up to the Rangeland Derby to have the horses prepared.

“A regular year would see five weeks of sanctioned, competitive racing before the Rangeland Derby and for safety reasons, the Stampede relies on that period of competition to ensure the fitness of the teams – both drivers and horses - before they compete in Calgary,” she said. “Unfortunately, as a result of pandemic-related impacts on the 2020 and 2021 chuckwagon racing season across western Canada, the drivers have been unable to compete at sanctioned races for 22 months.”

The Stampede had already taken safety measures after six horses died at the 2019 Rangeland Derby.

The number of drivers on the track for each of the nine heats was to have been reduced from four to three for 2021.

Sutherland said he had received word about the cancellation of the 2021 races on May 27 from a friend about an hour before he was notified by the Calgary Stampede.

“They don’t have to consult with me to make a decision and quite frankly, they didn't,” he said.

Barnes said the Stampede has been in regular contact with the drivers.

"Throughout this spring the Stampede checked in with each driver regarding their pre-season conditioning and race plans,” she said. “We also worked with the WPCA to determine what might be possible."

The Rangeland Derby is by far the biggest payday for drivers. For Sutherland, with sponsorship and prize money, it would be more than $100,000.

If he were to win it would be an even bigger financial windfall --the champion receives a $100,000 first-place cheque.

To miss the event for two consecutive years “is financially crippling,” he said. “And it will be for a number of the drivers. It will be very similar to businesses across Alberta – if we can weather the storm, it will be touch and go whether the books can continue to balance in 2022, 2023 and 2024. All of the financial reserves are being used up to keep their business alive… It’s going to end some of the chuckwagon businesses. There are going to be guys that can’t hang on for another 12 months without some revenue… That’s just the way it is… Everyone has hurt in the last 16 months and chuckwagon drivers are no different…

“For us, the Calgary Stampede is a very important event. It showcases our sport to the world and this year it isn’t going to.”

Barnes said plans are to have the wagons back in 2022.

“Chuckwagon racing has been an iconic part of the Calgary Stampede for nearly 100 years and we remain fully committed to it,” she said. “We look forward to celebrating the return of the wagons to the Stampede track in 2022, and for many more years to come.”

Sutherland will now focus on the World Professional Chuckwagon Association events, which have some races tentatively scheduled.

The first event is the Ponoka Stampede, tentatively scheduled for June 29 to July 4. Sutherland is the defending champion, having taken the title in 2019.

The Guy Weadick Chuckwagon races in High River are unofficially scheduled for July 22-25.