Runner goes the distance on treadmill 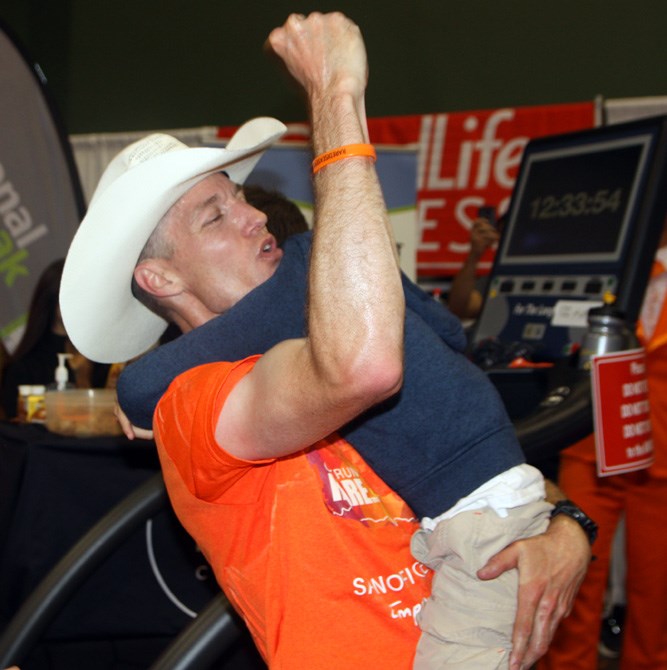 Okotoks&#8217; Dave Proctor hugs his son Sam after setting a pair of records for running on a treadmill at the Scotiabank Calgary Marathon Expo on May 25.

You can go a long ways on a treadmill.

Okotoks' David Proctor set a pair of records for running on a treadmill at the Scotiabank Calgary Marathon Expo on May 25 at the Big 4 Building, but more important to him, was raising awareness about the difficulties families have when a loved one has a rare disease.

Proctor broke the longest distance ran on a treadmill over 12 hours when he was clocked in unofficially at 153.8km. As well, he worked some overtime by setting the fastest time covering 100 miles on a treadmill when he finished at 12:32:26.

Proctor is motivated by his son Sam, a student at St. Mary’s School who has RECA, a disease which affects his balance and mobility.

Proctor broke the record with a sore leg, which started acting up well into the run that started at 4 a.m.

"I started having some significant hamstring issues and it started really affecting my time," the 38-year-old Proctor said. "I couldn't push a pace at all. It was probably about 60 miles in it started hurting... I'm really happy with my times with the issues I had."

The previous Guinness Book of World Records  for longest distance over 12 hours was 147.3km by Matthew Eckford of Australia on May 11, 2018.  However, recordholders.org has Vito Intini at 152.50.

Guinness does not have a record for fastest 100 miles for a male on a treadmill, but recordholders.org has American Serge Arbano at 14:22:49.

Proctor's performance comes  about 11-months after he was forced to stop his record-breaking attempt at running across Canada just due to a bad back.

"It's been a hard road coming back," Proctor said. "A big effort to get my performance back to get where it was... My back is now 100 per cent."

The best support came from his family, wife Sharon and their children who were there to cheer dad on. As well his brother Dan, mom and dad, Nancy and Randy,  were there as well.

"I have the most incredible family and the best upbringing a guy could ask for," Proctor said. "Their support is wonderful."

It wasn't  the first Guinness record Proctor has broken by running like a mouse in a wheel for a long-time. In 2016 he set the longest distance for running on a treadmill for 24-hours at 260.4km.

Proctor is now organizing the Outrun Backyard Ultra scheduled for June 21 at the Millarville Race Track.