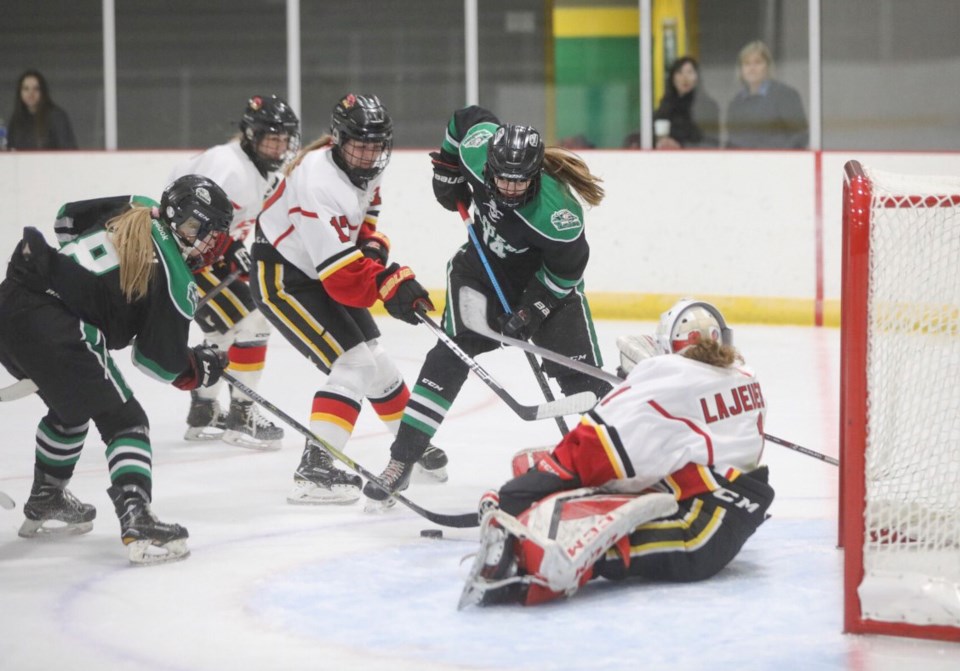 The Raiders worked overtime to leave a positive first impression.

“You’re practising for over two weeks and you never know what you’re going to get,” said Raiders head coach Dustin Borbandy. “Because everything you work on you hope it translates to game format.

Rocky Mountain came out of the gates strong in its home opener, Oct. 5 at the Scott Seaman Sports Rink in Heritage Heights, a competitive battle with the Fire ending in a 3-2 loss after seven rounds of the shootout.

“We settled in and I thought we played well, we competed really hard,” Borbandy said. “We were down and just kept coming back.”

The Raiders got on the bus for their first road game of the season, an Oct. 6 trip to St. Albert to clash with the Slash — the three-time defending national champions.

Backstopped by a stellar effort in goal from debutante and first year Raider Hali Lawrence’s 31-save effort, the visitors picked up a point in another 3-2 loss in a shootout.

“They outplayed us at times for a fair bit, but we stayed the course, kept going, kept pushing,” the coach added. “And there again down 2-0 going into the third, nobody quit, nobody mailed it in. We just kept pushing forward and little by little we kept chipping away.

“It was nice to see our players this early in the season, being the second game and following our first game, coming back from being down 2-0. That speaks a lot for our players and the no quit attitude.”

Another positive for the Raiders was the performances on the last line of defence.

Coming off a rebuilding season in 2018-19, the Raiders coach is optimistic about this year’s group.

The coach mentioned new forward Sydney Benko, a scoring winger, and returning blueliner Alesha Santos as some of the players expected to have big impact seasons.

“Overall we’re very happy with all of our players,” Borbandy said. “Still trying to find chemistry on a few here and there all the time, but we as a coaching staff this weekend really talked about wanting to go into the weekend and giving everyone as much opportunity as possible.

“We put players on powerplay, five-on-five, we didn’t cut down on our bench until a few minutes left in the third period to take a little pressure off the first years.”

Parity across the six-team league has been evident in the early going and it could be the defining characteristic of the 2019-20 AFHL season.

“You’re starting to see a lot of teams having success that might not have in previous years,” Borbandy said. “Right now, it’s looking like it’s going to be a really, really tight league and we’re looking forward to it.

“We’re hoping that we can compete and make a bit of a statement in this league.”

For more information on the Raiders go to midgetaaa.afhl.ca