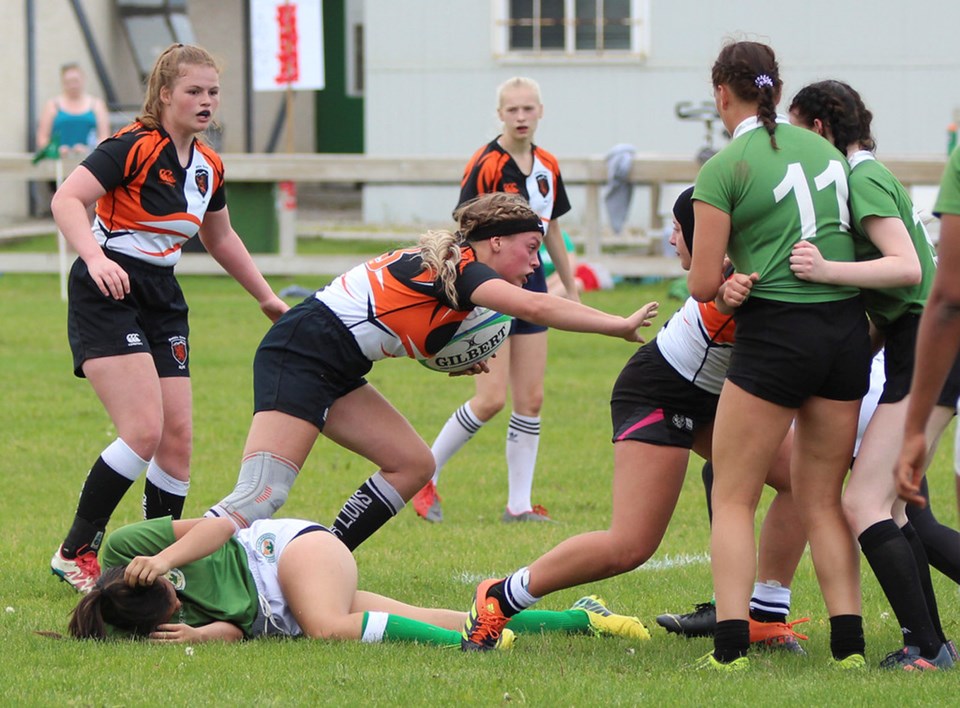 The Foothills Lions Rugby Club have resumed training and could see game action as early as next month for the first time in two years. (Remy Greer/Western Wheel File Photo)

Summer is set to bring opportunity two springs have taken away for young rugby athletes in the Foothills.

With high school athletes having two seasons worth of spring rugby sidelined the potential return to game action during Stage 2 of Alberta’s Open For Summer Plan is a welcome bit of good news for members of the Foothills Lions Rugby Club.

“It’s been kind of terrible, to be honest,” said Foothills Composite Grade 12 student Keaton Van Rooyen. “In Grade 10, you’re the new kid, you don’t know any of the players and then over the years you get more playing time and start building a space for yourself in the team.

“Because I was in Grade 10 when I did that I never really got the opportunity to advance with my school.”

Another knock-on effect from not having high school league play is it takes away from the recruiting drive for club rugby.

“Sometimes you can get friends at school to join the school team and then they’ll like it and come to the club team,” he added. “But just not having that kind of experience with them our club numbers are obviously super down.”

With sports restrictions poised to be removed once Alberta hits Stage 2 of its Open for Summer Plan, as early as June 10, the switch flipped from training for an indefinite period to ramping up for a season.

“I’m so excited, and it kind of came out nowhere,” Van Rooyen said. “One day it was maybe we’ll get some training in and the next day I get an email saying that pretty much competitive season is a go and we start training three days from then.

“We have like three to four weeks to prepare for that.”

In the absence of a high school season to prepare for club rugby in the summer months, time is of the essence for the athletes to grind out as much training as possible over the coming weeks.

“Now we have about three weeks to train before our first game in two years,” he said. “It’s like going from walking to sprinting into another dude.

“I’m terrified, but in a good way, it’s been such a big part of my life in the past years, it’s kind of filling a missing hole. (Playing again) it means so much.”

Van Rooyen, who primarily plays as a wing or full back, said it will be a massive jump to go from his last competition at the U17 ranks to just about playing at the men’s level this summer.

“During first lockdown I trained a lot by myself, but just because of the pure nature of rugby it’s very difficult to get the training in if you’re not playing competitive matches,” he said. “We haven’t been able to do the contact training and I can do all the skills training I want, but when you’re in that high intensity event those skills have to be second nature and we haven’t really gotten an opportunity to create that.”

The Lions returned to training earlier this week with a variety of age groups getting on the field.

“It’s been great being able to see my teammates again,” said U18 Lions fly-half Miranda Grant. “And the opportunity to stay active and fit with friends has really been awesome.”

Grant, a Grade 12 student at Holy Trinity Academy, has missed out on two seasons of high school rugby with the Knights.

The Lions academy was able to hold some training over the fall and winter months in small groups inside the Crescent Point Regional Field House.

“It did mean a lot, we weren’t able to practice as a full team, we were in cohorts of 10,” Grant added. “It was still better than nothing.”

In the ramp up to potential game action, the Lions juniors are practising three times per week with an emphasis on skill development, game play and trying to rely on one another as teammates.

Lions president Jamie Mior said with the reopening plan in place there’s optimism in the rugby community that things will be going ahead.

“We’re looking at four or five weeks of pretty intense fitness training to get everybody back on the pitch,” Mior said. “Then we’re looking to possibly mid-July to possibly start playing some exhibition games and get some competitive, league play going in that August, September range.”

Mior added the kids are thrilled to be back to a competitive window as the ones who’ve been hurt the most by sports restrictions.

“It’s definitely been frustrating and challenging, but we’re doing what we can to try and keep the sport alive,” Mior added. “The ones that are super keen and took rugby as their primary sport, we’ve managed to keep them engaged. It’s the competition and the games that really are the draw for sports. When you don’t have that, it’s really difficult.

“With the shutdown and the length of it that was really discouraging so it was really encouraging to see a really aggressive reopening.”