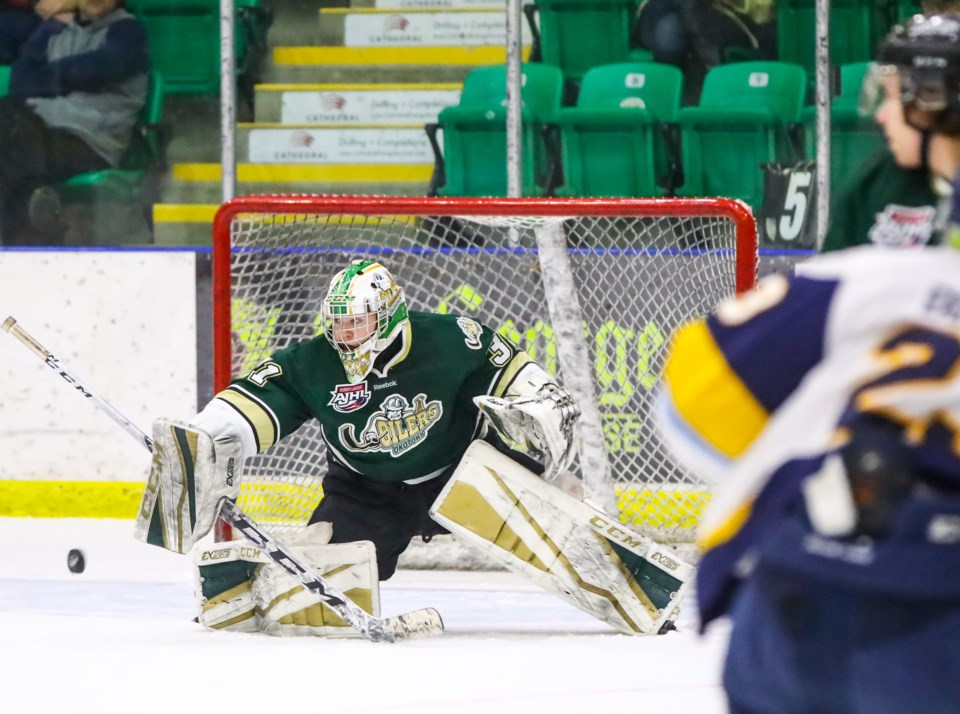 Okotoks Oilers goaltender Brady Parker was the team's game star in a 3-2 overtime loss to the Camrose Kodiaks on Oct. 12 in Camrose. (Bremt Calver/Western Wheel)

Always good to get three out of four points on a two-game road trip in an elite league.

It’s even better when it boosts the confidence of young players.

The Okotoks Oilers got one point in their 3-2 overtime loss to the Camrose Kodiaks Saturday in the Rose City.

However, it was the strongest game of the young season for Oilers’ goalie Brady Parker, who stopped 32 shots and was named the Okotoks game star.

“I’ve been battling and everyone has their ups and downs and think I am coming out of it now,” said Parker. “I had a good game against Camrose and I am feeling pretty good about my game right now.”

He went into the game with an 0-2 record and a save average of less than 80 per cent.

It was only a matter of time before Parker improved. He was a nominee for both the Alberta Junior Hockey League Rookie of the Year and Top Goalie last season.

“I felt really confident, we didn’t come out on top but we got a point,” Parker said of the Camrose loss. “I am going to build off that game on Saturday.”

If not for a few breaks the Oilers would have got the victory in Camrose.

The Oilers had a 2-1 lead after two periods on Eric Parker’s third of the season and Zane Kindrachuk’s fourth of the year.

Camrose would win the game during a 4-on-3-powerplay goal in overtime by Lane Brockhoff.

“We killed the first half of it and we kind of lost assignments and we gave up some big shots and they scored,” said Oilers coach Tyler Deis.

He has no concerns with Parker in net.

“At the end of the day, Parker is a great goalie and he came up with a great effort last game,” Deis said. “I thought he was strong, busy, blocked a lot of shots — he was confident and free.”

Parker has been sharing goaltending duties with Ashton Abel who came over from the defunct Calgary Mustangs.

The Oilers started the roadie with a 5-4 victory over the Drumheller Dragons on Friday night. A big game as Okotoks and Drum sit no. 2 and 3 in the league’s South Division standings.

It was especially fun for the Oilers.

Joel Krahenbil had a pair of goals for the Oilers, including the game-winner.  His linemate Dylan James also potted a pair and had an assist.

“I had two strips (from defencemen) from the blue-line,” the 16-year-old James said “One I went top shelf and the other I slid it over to Krahenbil who scored… Joel sees the ice so well and he knows the league.”

James said he felt it was his best game of the year.

“When I get in the lineup, to have a game like that, gets my confidence up,” he said.

Abel got the win in net for the Oilers. He faced 24 shots.

Though the Oilers didn’t get four out of four points on the road trip, three out of four isn’t bad.

“Two road games against two big rival teams... to come away with three points, we're happy with that,” Deis said.

The Oilers have an 8-2-1 record and will be busy as they play five games in the next 11 days.

Okotoks faces the Lloydminster Bobcats tonight at the Pason at 7 p.m. in Okotoks.

They face a grinding road trip this weekend. They are in Grande Prairie to play the Storm on Friday. The Oilers take on the Whitecourt Wolverines on Saturday.

They finish the weekend off with a matinee against the Thunder in Drayton Valley.

There will be no rest for the home team.

They return to the Pason Centennial Arena to play the Brooks Bandits, the no. 1 team in the country on Oct. 22.