An Okotoks athlete spent his Christmas break running 600 kilometres and breaking two Canadian records — not bad for a training run. David Proctor broke a 136-year-old Canadian record when he ran 500.
0
Jan 10, 2018 12:00 AM By: Bruce Campbell 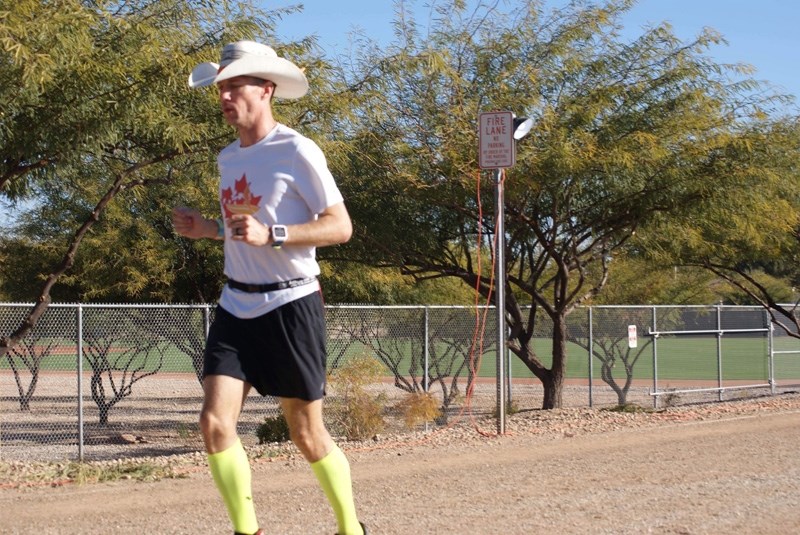 Dave Proctor finished third at the Across The Years six-day ultramarathon in Glendale, Az. Dec. 28-Jan. 3.

An Okotoks athlete spent his Christmas break running 600 kilometres and breaking two Canadian records — not bad for a training run.

David Proctor broke a 136-year-old Canadian record when he ran 500.1km in three days at the six-day Across the Years ultramarathon on Dec. 28-Jan. 3 in Glendale, Arizona. The previous record was 496.5 clicks by Richard Lacouse in 1881.

“This was a perfect fitness test — I feel totally confident,” the 37-year-old Proctor said. “My ultimate goal is to run across Canada. The pace I was running, I feel I can do it in 66 days.”

The ultramarathoner will attempt to run across Canada in 66 days as part of his Outrunrare campaign — an effort to raise money for the Rare Disease Foundation and to break the record set by Al Howie of 72 days in 1991.

Running in the Grand Canyon State was a tune-up. Proctor had gone to Arizona hoping to win the six-day total and set the Canadian record on the way, but had to quit after a little bit more than four days due to injuries to his feet and knee. His total of 600km was still good enough to get on the podium in third place.

Proctor led the competition after the first day with 202km. He ran the longest distance in 48 hours in Canadian history when he clocked in at 360km. The previous record was 355km set by Trishul Cherns in 1995.

However, running from Calgary to Edmonton in two days puts a toll on the body. Proctor had a strong run on Day 3, clocking in some 140km but things were going a bit wonky – his legs.

“Day 3 was when I noticed my ankle really swelling, my foot hurting and I had some twitching and imbalances in my hip,” Proctor said. “My pace started to slow, but I was okay with that.”

While not balmy by Arizona standards, the 25C temperature was wearing down the Okotokian, where back home it was about 50 degrees colder.

“There were a couple of days I had to pull back a bit and, eat different foods put ice in my hat — as Canadians we’re just not used to it,” he said.

The course was about a 2km loop. Although doing the same loop 70 times a day can drive one loopy — it did have its benefits. His crew, Sharon, mom and dad Nancy and Randy from High River, could supply him food or water every 10 minutes if needed as well as give split times.

“At times, I wouldn’t even ask my mom what I wanted and she would give me oh, an avocado sandwich and that was exactly what I wanted,” Proctor said. “She’d make me a bacon sandwich, it was almost like she was reading my mind — she’s been my mother for 37 years. I fueled really well on Day 3.”

On Day 4, Proctor – who was leading the six-day event at this time – began to falter.

“When I got started, I thought I felt alright, but I started to notice I was getting a lot more tired,” he said.

He still ran 100km on Day 4, but with a sore knee — which he aggravated due to compensating for his hip — to go along with his sore feet, there was concern.

“That was New Year’s Eve and about 5 p.m. I had a really hard time keeping the pace,” Proctor said. “At 10 p.m. I started moving like a zombie. I told Sharon I was so deathly tired, that I couldn’t get to that 140km-160km range that I wanted.”

He woke up on New Year’s Day and after a big breakfast, he noticed his right knee was inflamed.

Proctor was able to regain the overall lead, but after about 35km, he received some medical advice that to continue his run could cause serious damage — hampering his attempt to run across Canada in 66 days.

He said the injuries were due in part to the pea gravel that was on the course.

He has plenty of motivation to prepare him for running from Victoria, B.C. to the The Rock.

Proctor, who’s elementary school aged son Sam has a rare disease which affects his balance and mobility, will begin his cross-country run June 25 in Victoria.

His crew will include Okotoks ultramarathoner Wayne Gaudet, a Canadian record-holder for distance ran in 24 hours for men over 60, and his wife Trish.

For more information about Proctor’s cross-country run go to outrunrare.com