Raiders running ahead of the pack 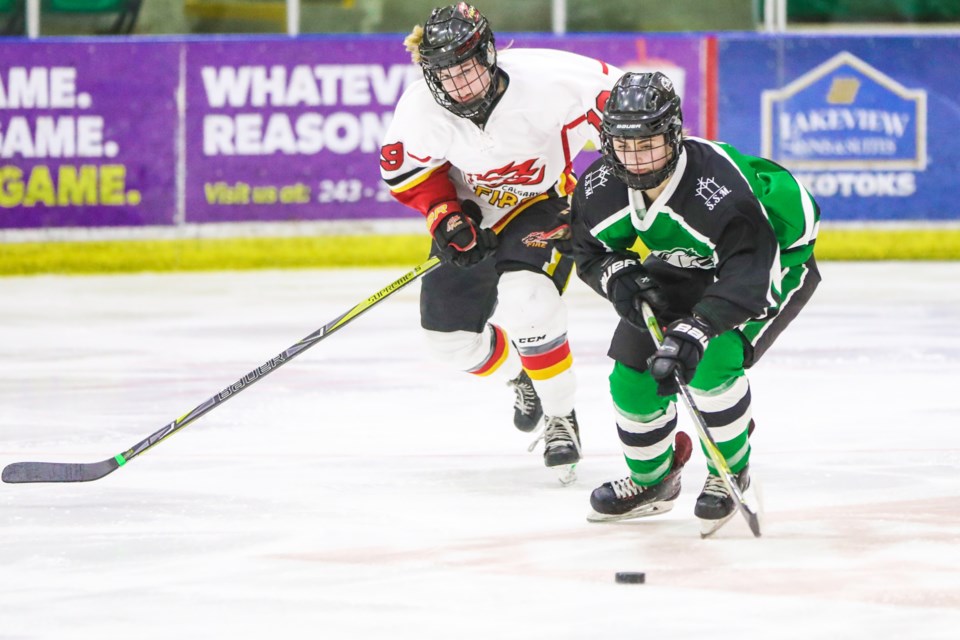 Rocky Mountain Raiders blueliner Abbey Borbandy had the tying goal in the last minute of regulation as the Raiders edged the Calgary Fire 4-3 in overtime on Nov. 8. (Brent Calver/Western Wheel File Photo)

The Rocky Mountain Raiders are on fire to start the regular season.

Kallie Clouston scored in the final five seconds of overtime to lift the Raiders (3-1-0) past the Calgary Fire 4-3 in overtime on Nov. 8 at Father David Bauer Arena to complete a two-game weekend sweep and climb into top spot in the Alberta Female Hockey League’s U18 AAA Division.

"We had some good scoring opportunities throughout the game and just kept plugging away, pushing away and things were going to bounce and give us an opportunity and they did," said Raiders head coach Dustin Borbandy. "We started getting a lot of players to the net, different layers, sticks in lanes looking for tips where a couple of those went in as a result of some of the havoc we created."

In the Nov. 8 tilt, blueliner Abbey Borbandy forced overtime with the tying marker on the powerplay in the final minute of regulation with Claire Hobbs and Jordyn Matthews also finding the back of the net in a rollercoaster final frame. Kennadi Crook made 24 saves in goal.

The Raiders had a powerplay at the end of regulation and pulled their goalie for the extra-attacker leading to the tying goal in the late stages. In overtime, the team had to kill off a double-minor before Clouston was able to beat the final buzzer with a determined effort down the ice, shooting across the seam at the top of the circle.

"It's those games where you probably didn't deserve to win the game, but every body goes through that little bit of adversity," the coach added. "And to know that you're able to come back and fight tooth and nail, keep grinding and then to get rewarded for that, it's all part of sports, sometimes you don't deserve to win, but you find a way to get it done. And that's what it was.

"It sure gives our kids a good boost of confidence to know they can bury pucks when needed."

Led by a two-goal, three point effort from Raquel Ingram the Raiders opened the weekend in a 3-1 triumph over the Fire, Nov. 7 at Pason Centennial Arena. Caylee Crowson had the other marker with Keana McKibbin chipping with three assists.

"We're starting to see players get those opportunities and finding the net where a lot of the times they might not have had that opportunity or it might not have gone in for them," Borbandy said. "But overall our team just played hard on Saturday, relentless on pucks, played like a team and kept it simple."

Crook, a first-year U18 player, was solid once again with a 30-save performance in goal.

"We're pretty thrilled, we've got a first-year goaltender who has been there and now she's got three under her belt," the coach added. "Which is pretty crazy."

Rocky Mountain opened the season on Halloween weekend with a split versus the Fire highlighted by a 1-0 win on Nov. 1 backstopped by a 20-save shutout from Crook. McKibbin had the lone tally in the win.

The Raiders and Fire close the six-game series this weekend with a Nov. 14 date at Calgary’s Father David Bauer Arena followed by the finale on Nov. 15, a 4:15 p.m. start at Pason Centennial Arena.

Rocky Mountain is then off for two weeks before taking the ice against the Red Deer Chiefs, the first of six matchups between the teams set for Dec. 5 in Okotoks.

"After our exhibition games we looked at ourselves as a team and started to change a little bit of our practice habits and what we were working on," Borbandy said. "Got back to our basics and that compete level and paying attention to the details.

"I think it's paid off for us and built our players' confidence and playing as a unit has sure helped us out a lot."

For more information go to ooaaoilerhockey.ca