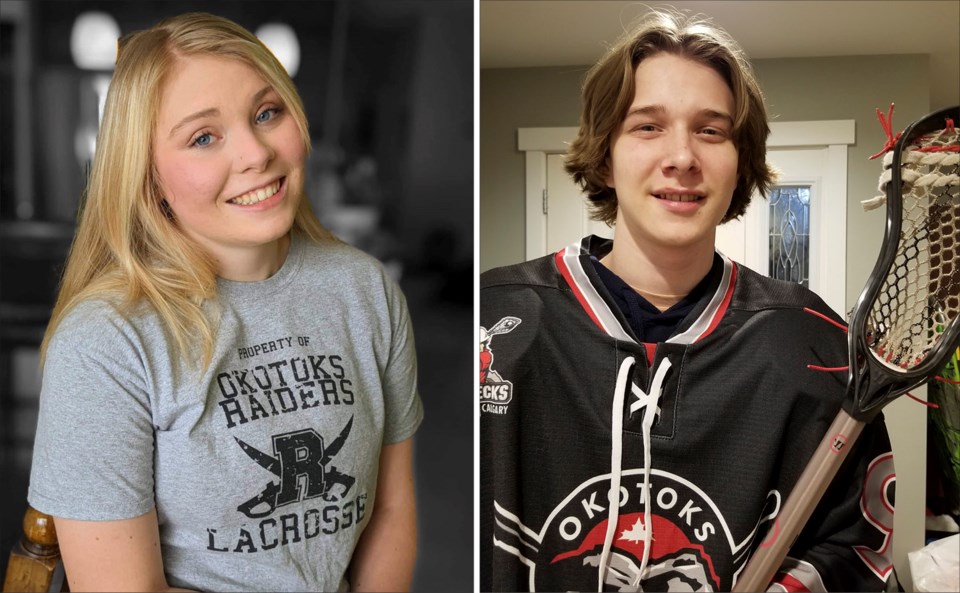 Two athletes who went the extra mile have been given a boost for the next step.

The Okotoks Raiders Lacrosse Association awarded Leila Reid and Oliver Faye with its annual memorial scholarship in recognition of their dedication to all facets of the game on and off the floor.

“It’s an honour to be recognized by the Okotoks Raiders for this scholarship,” said Reid. “As a player and a volunteer with the club it is awesome to receive financial assistance for post secondary education.”

The scholarship comes with a $1,000 cheque towards each athletes’ post-secondary studies.

Reid joined the Raiders in 2015 and continued on in the sport with the Calgary Fury female lacrosse club. She has designs on continuing on at the junior level with the Ladies Raiders in 2021.

“Being a part of lacrosse has really shaped me as a person,” Reid said. “Teaching me leadership as a player and a mentor to younger players. Lacrosse showed me that hard work and dedication to something I’m passionate about will help me achieve success. The relationships and connections created through playing lacrosse will stay with me forever.”

Reid has been an ambassador for the Raiders, helping out as a mentor to younger players and assisting at camps over the years.

“I started lacrosse a bit later than others. The coaches and people that helped me develop, has had a huge impact on me,” she said. “It made me really want to give back and help others succeed and learn to love the sport like I do.

“Seeing the joy and excitement when coaching a younger player, like when they succeed at something they’ve been working toward, reinstates why I love the game and the community it helps create.”

Going forward, Reid said she plans to become a licensed mechanic and to get her degree in education with the goal of putting those two together to hopefully inspire more females to get into the trades.

While Reid made an impact in a short time with the Raiders, Faye has been involved with the program since the age of five as a mini-tyke and completed his minor lacrosse entirely with Okotoks.

“It’s just something I looked forward to, after school if I had a lacrosse practice that’s what I looked forward to all the time,” Faye said. “It’s always really fun seeing my friends on the team and I’ve been doing it for so long.

“I have hockey (too), but I kind of prefer lacrosse because you get to hit harder.”

Some of his best memories through the years go back to the 2018 Bantam Raiders squad that finished the regular season undefeated, won the city championship and earned the provincial silver medal.

“The B-C team where we didn’t lose a single game, that was very fun,” he said. “And one time I scored without a shoe on. Some guy ripped off my shoe in our end and I ran and deked out the whole team and went on a breakaway and scored.”

Faye’s final season in 2020 was cut short after just a couple practices due to the pandemic hitting in mid-March last year.

It was poised to be another memorable campaign for the Raiders.

Despite the cancellation of the season, Faye was a fixture at club run activities with an emphasis on mentoring younger players.

Outside of the sport, he has volunteered with St. Luke’s Outreach Centre and Feed the Hungry in Calgary.

“It means a lot, it’s really helpful especially with COVID,” he said of the scholarship. “It’s really great and it’s going to help a lot.”

For more information go to okotokslacrosse.com.