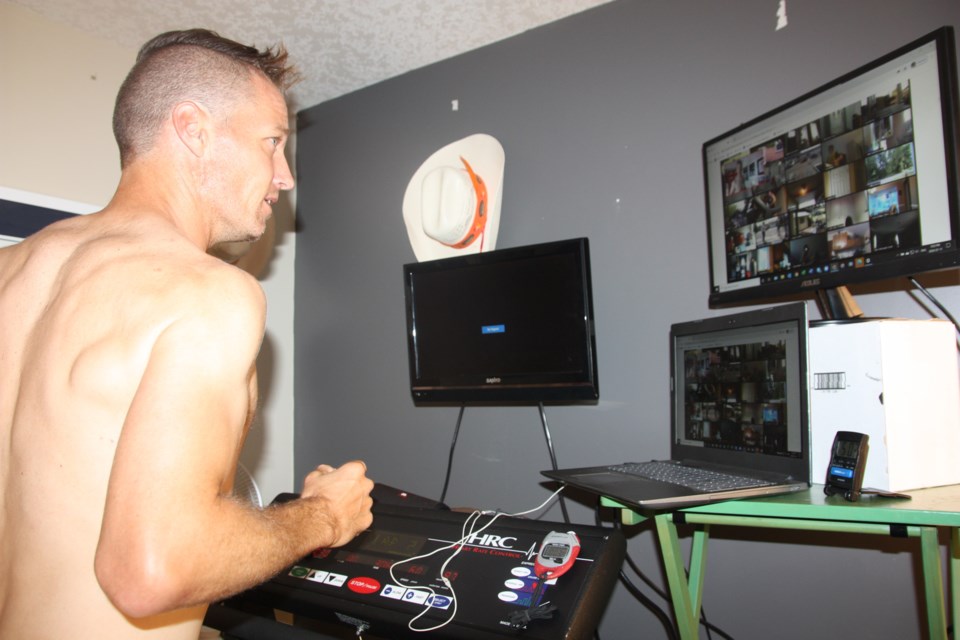 Okotoks' Dave Proctor starts his 11th 6.7km lap on his treadmill in his basement at the Quarantine Backyard Ultra on July 11. (Bruce Campbell, Western Wheel).

Running an ultra means doing your ultimate best – even on a hot day.

A group of runners from an Okotoks fitness club weren’t among the top finishers in the Quarantine Backyard Ultra starting on July 11, but the athletes gave it their all on a day when the mercury hit 27C.

“I am really happy with how I ended up running – it’s the furthest I have ever run in my life,” said Okotoks Gillian Petit. “I was just shy of 55km – which is eight loops of the 6.7km.

“But it was dying hot out yesterday. I saw (world-class ultra-marathon runner Okotoks' David) Proctor was running on his treadmill. We will have to consider running inside if it is that hot again.”

The format has runners completing a 6.7km loop every hour for as many hours as it takes to eliminate all but one competitor. There were more than 1,200 runners from around the world entered in the virtual race, which was orchestrated from a garage in Okotoks.

“It’s an interesting race, you just go as far as you want or as short as you want,” Petit said.

She surpassed her goal of seven laps.

“I have never been an endurance runner but back when COVID hit I started looking for new challenges and things to do and a friend recommended I try this back in April,” she said.

She said her longest run prior to COVID was 10km. However, she was darn good at it – she was the top female finisher in the Sheep River Road Race in 2019.

Petit was one of a handful of runners from Natural High CrossFit running in the event.

CrossFit member Jason Verschoor missed his goal of completing 10 laps, but DNF’d during his sixth lap.

“This has been a journey for me – about 10 years ago I couldn’t even walk up the stairs I was so out of shape,” Verschoor said. “So I started doing races on the extreme side, obstacle races, now I am aiming for ultra-endurance races and I thought this was a good one to do.”

He admits he is a Clydesdale not a thoroughbred.

“This is a challenge – a mental challenge, but today turned out to be a physical one because of the heat,” he said. “First three laps in the shade were great… I’m not built to run, but I enjoy it.”

He fuelled himself with saskatoon pie and waffles.

The Natural Cross-fitters ran a loop starting at Natural down North Railway then along the river path turning back to the club at Seaman Stadium.

The other members of the Natural High crew were Shannon Winslade, Chris Hider and Nicholas Petit, Gillian’s husband.

Proctor, one of the organizers of the race, dropped out after 33 laps on Sunday evening. He ran from his Okotoks basement on a treadmill – he also provided commentary on the Zoom-like broadcast at the bottom of every hour.

During one of his interviews he said he was consuming 400 to 500 calories every hour.

Britt Ivan of Okotoks called it a day after 11 laps stating the heat and a sore foot was a factor.

Meanwhile, Daniel Bowie of DB Visual production was handling the Zoom production from his Okotoks garage, which had been converted into a Sportsnet like studio.

One of the highlights of the broadcast was an appearance of rapper Fatman Scoop on Saturday evening.

The last man standing was Jon Noll from the United States who completed 51 laps, which is 341.98km.

For more information go to www.facebook.com/