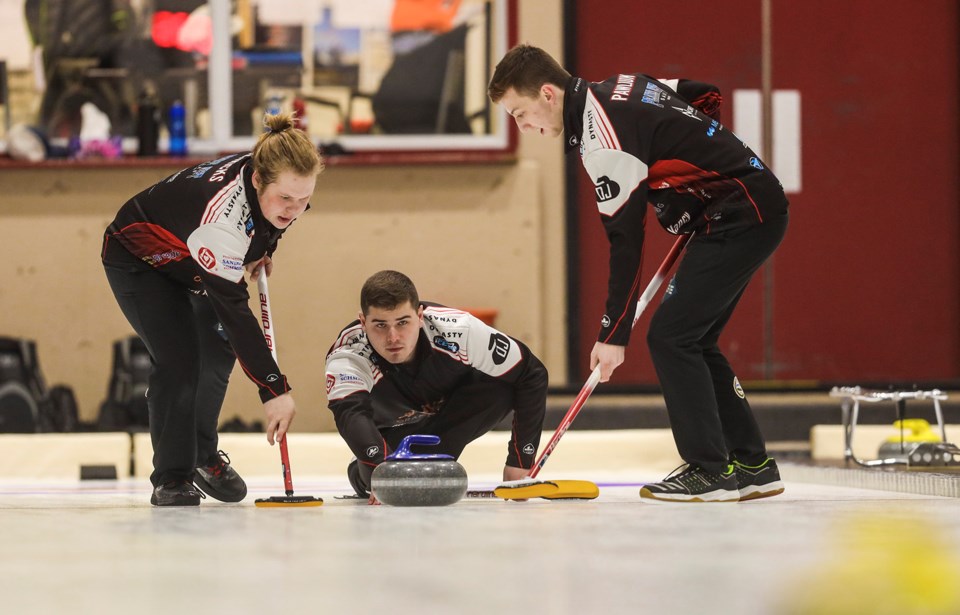 Team Libbus second Michael Henricks, left, and lead Zachary Pawliuk, right, take over sweeping a throw by skip Jacob Libbus during the the Alberta Junior Curling qualifiers at the Oilfields Curling Club in December. The team finished 2-3 at the men's provincials in Westlock. (BRENT CALVER/Western Wheel)

The first time and very likely not the last time.

Turner Valley skip Jacob Libbus guided his junior aged team to a respectable 2-3 record in their debut at the men’s curling provincials, the 2020 Boston Pizza Cup, Feb. 5-9 in Westlock.

The Edmonton rink got the toughest competition from the jump, with an opening draw match-up versus former provincial champion and heavy favourite Brendan Bottcher in a battle of Saville Centre teams.

Bottcher took the match by a 10-5 count.

“We went in knowing they’re definitely the top team there and they were going to be ready to play us no matter what,” Libbus said. “It was pretty big for us to get that first experience. We thought it might be beneficial to play them in the first game, maybe they don’t know the ice as well, we can surprise them a little bit.

“After playing them, there’s never an ideal time to play them.”

Team Libbus bounced back by outlasting Strathmore’s Kevin Park 9-6 in the second draw, a game that went to extra-ends.

“That was a really big game and going into it we had just lost to Bottcher and we kind of knew how we had to play and what it took to be playing in a men’s provincial,” Libbus said. “Going into that game, we just had to keep battling keep pushing.

“We ending up having hammer in the eleventh end and the boys left me a shot to win.”

Libbus won his second in a row in dispatching Peace River’s Scott Webb 9-4 before the narrow 10-8 loss in eleven ends to the veteran Ted Appelman rink.

“That game was really fun, it didn’t end up going the way we wanted, but we made a lot of shots and a lot of nice shots in the end and so did they,” Libbus added. “The difference between us and them, is they’re playing like that all the time and consistently.

Bottcher went on to win the championship, edging Karsten Sturmay 7-6 in a competitive final.

Still, not a bad provincial showing for a team that played the 2019-20 season at the junior level.

“We went into understanding this is a top-level event, Alberta is one of the toughest provinces to get out of for men’s in the first place,” he said. “We wanted to take in the experience, some guys never get back to men’s provincials and just understanding how lucky we were to be there and enjoying it.”

In his third straight appearance at the Boston Pizza Cup, Foothills Comp graduate Kyler Kleibrink, the third for the Jeremy Harty Rink, just missed out on the playoff round with a 3-2 record in Westlock.

For more information on the event go to curlingalberta.ca