Proctor’s back on the treadmill

A record-breaking long-distance runner isn’t one to stay in one spot, unless he’s trying to break a record to raise money to fight rare diseases.
0
May 1, 2019 12:38 AM By: Bruce Campbell 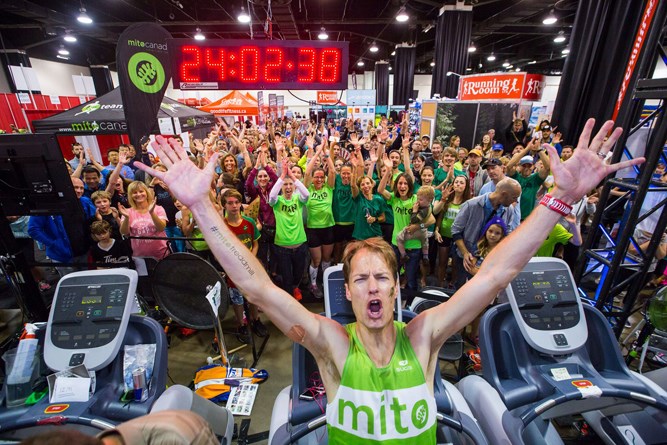 Okotoks’ Dave Proctor, here setting the 24-hour distance record on a treadmill in 2016, will attempt to break another record at the Scotiabank Calgary Marathon Expo on May 25.

A record-breaking long-distance runner isn’t one to stay in one spot, unless he’s trying to break a record to raise money to fight rare diseases.

Okotoks’ Dave Proctor is attempting to break the world record for longest-distance run on a treadmill over 12 hours as well as the fastest time for 100 miles on a treadmill at the Scotiabank Calgary Marathon Expo on May 25 to raise money for the Rare Disease Foundation.

It is his first major fundraiser since Proctor attempted to run across Canada in a record breaking 66 days last summer. His attempt came up short due to a sore back and he had to stop in Manitoba in late July.

“My back was killing me it was pretty substantial, but the big thing was not being able to complete my goals,” said Proctor, after a 100-minute run on the treadmill at Okotoks GoodLife Fitness on Sunday. “This is my first big event back and a test to see how the back is doing.”

Proctor is motivated by his son Sam, a student at St. Mary’s School who has RECA, a disease which affects his balance and mobility.

It won’t be the first Guinness record Proctor has broken by running like a mouse in a wheel for a long-time. In 2016 he set the longest distance for running on a treadmill for 24-hours at 260.4km.

He has changed his training methods a touch for this 2019 attempt – more speed work, less long distance, under the direction of coach Travis Schiller-Brown of Personal Peak in Calgary.

“I am putting less miles, but putting in faster miles,” Proctor said. “My fitness has improved, but I am only getting one long run a week.”

“The next couple of weeks I will put in some runs closer to 80km,” he said.

The speed work has paid off – he set a personal best winning the Life Rocks 5K at 16:30.

“For an ultra-runner that’s a pretty good 5k,” Proctor said. “My fitness is there, I just really hope my back holds up [for the treadmill].”

Proctor will start on the treadmill at 4 a.m. at the Big Four Building and he plans to step off at 4 p.m. The public is invited. Proctor’s friend, Daniel Bowie of Okotoks, a long-distance runner himself will be master of ceremonies for a portion of the event.

To donate to the Rare Disease Foundation on behalf of Proctor’s run go to outrunrare.com

A unique fundraiser will leave just the last person standing at an ultra-marathon event in Bragg Creek in June.

Proctor is the race director for the Outrun Backyard Ultra at West Bragg Creek on June 21.

“It’s a 6.7km loop and you have one-hour to run that course,” Proctor said.

If a runner comes in at 45 minutes, he or she can rest for 15 minutes, but must do another loop when the hour is up. The process is repeated until the runner can no longer finish the slightly rolling hilly course in the 60-minute allotment.

“Second place gets nothing.”

Laz happens to be Lazarus Lake, the founder of the famed Barkley’s Run and the Big Backyard Ultra in Tennessee.

The race is capped at 150 runners. At present, there are 141 runners registered, including six from Okotoks, and one each from Black Diamond and High River.

Proceeds from the Backyard Run Ultra in Bragg Creek will go towards the Rare Disease Foundation.