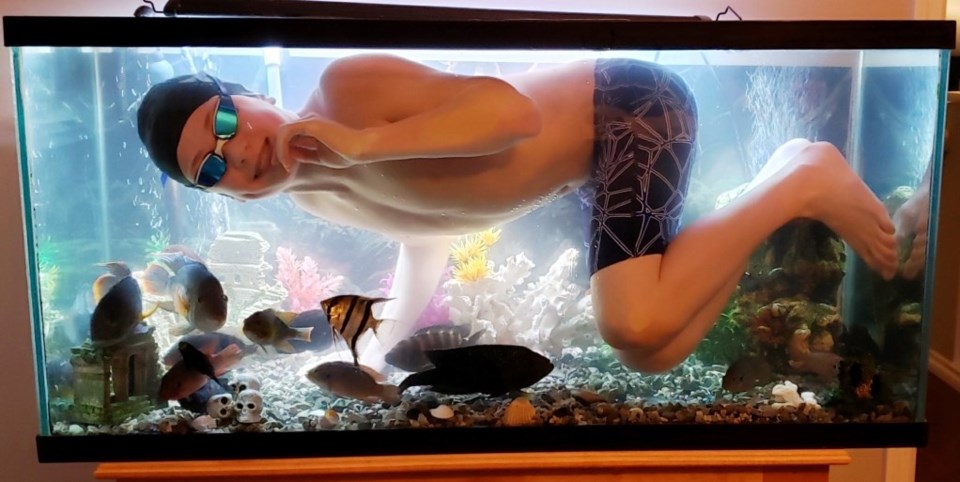 Okotoks Mavericks Swim Club head coach Todd Melton’s son Jaden gets in the fish tank at their home to showcase their desperation to get back training in water. The swim club is unable to train in pools for the foreseeable future due to COVID-19. (Photo submitted)

Athletes everywhere are getting used to the new normal amid the COVID-19 pandemic.

And you’d be hard pressed to find a sport more impacted by the social distancing and cancellation of group gatherings than swimming.

“Swimming for us is not even just sport, it’s more of a lifestyle,” said Okotoks Mavericks Swim Club head coach Todd Melton. “So these kids, some of them go 11 months a year, they’re used to every week no breaks except for a little one at Christmas and another one at spring break. So it’s hard to take that away from someone who’s used to it.

“It’s funny, right now they’re sending me videos because they’re missing swimming and Tess (Barber) is in her bathing suit pretending to do all the strokes in the snow, another kid in her living room with her face in a bucket full of water doing her strokes. And right now we’re cleaning our fish tank so my son (Jaden) can do the same. He’s going in the fish tank.”

As of March 15, the Town of Okotoks closed the Okotoks Recreation Centre where the Mavericks train out of the Riley Minue Pool. Alberta Public Health directives have also called for no large gatherings of over 50 people – putting group training and training within a pool out of the question for the foreseeable future.

It’s a jarring change of pace for an extremely regimented group of young athletes.

“I’ve been sending them videos, different dry-land videos, strength training, circuit training and we have a strength coach who’s send the kids some stuff as well,” Melton said. “But it’s hard, they’re going to have to do it on their own time.

The timing couldn’t have been worse for the swim club.

“It’s eight practices a week on average to nothing and it’s really hard that it came when it did. The kids have been working really hard since Christmas for this opportunity,” Melton said. “We kind of saw, we were worried that things were happening, but we didn’t actually think especially provincials would be cancelled.

“That’s probably the hardest part is we were all getting ready to swim fast and then that opportunity got taken away from all of us.”

The cancellation of Swim Alberta events occurred in a busy stretch for the swim club with some of the most important travel meets of the season in late March and early April. The Swim Alberta Provincials were slated for the March 13 weekend, the Spring Course Championships were scheduled for March 19-22 and the Western Nationals in Saskatoon were to be held April 16-19.

“Swim Alberta send out a note the day before provincials so that was hard because we only peak three times a year and we’re at our second cycle,” Melton said. “It’s very difficult and we just got smart boards, we just got tritons that are going to help our training, they just arrived in the mail last week. It’s frustrating and I know our kids are frustrated.”