Parker thriving back in starting role for Oilers 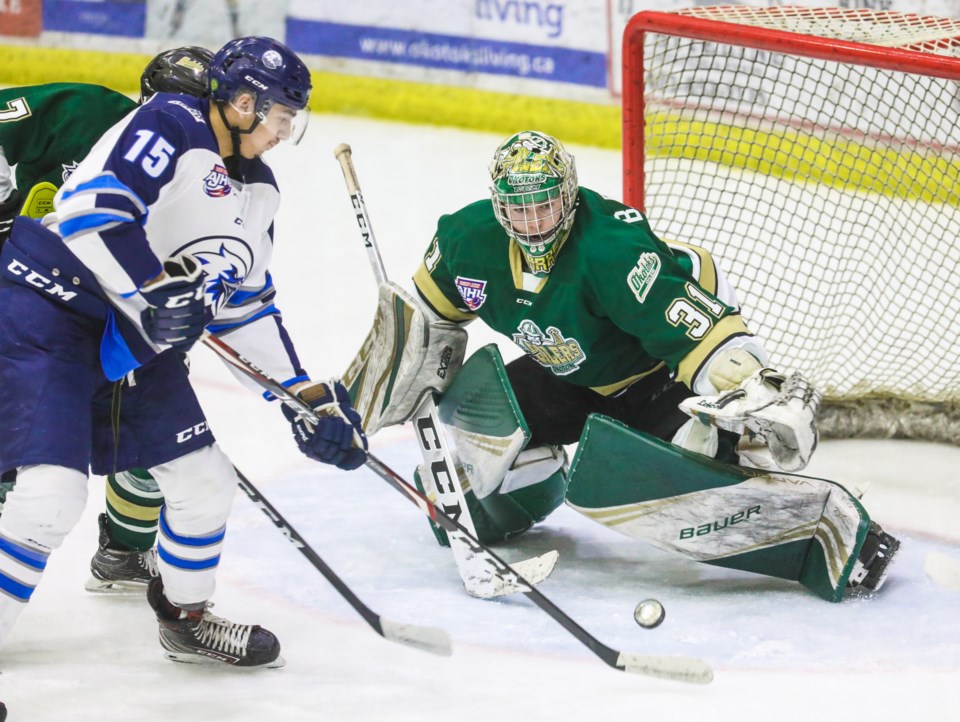 The Okotoks Oilers have taken the road less travelled on the last line of defence.

But as unique as the trajectory of its goaltending position has been, it’s produced as second year Brady Parker is once again thriving in a starting role after the wildly successful Ashton Abel joined the NCAA’s Boston Terriers in late December.

“I got a big opportunity after Christmas so I’ve been just trying to focus on my game and the guys have been good in front of me,” said Parker, the AJHL’s player of the month for January. “I’ve tried to keep it simple and be ready to go every night.”

That’s easier said than done, especially given the course of the 2019-20 season.

Though Parker was a goaltender of the year finalist in his strong rookie season, the acquisition of Abel in the off-season saw the incumbent’s number of starts drop.

“When you’re not playing you’ve got to really be working on the ice hard so when you get a chance you’re ready to go,” Parker said. “I learned some things from Abel and I think Abel learned some things from me … His calmness in the net, for sure I picked up on, how he manages games. (head coach Tyler Deis) is really big on helping me control the speed of the game and making sure momentum is not getting away from us.

“I just tried to be ready every night I was called and that’s how I was ready to go in January.”

For Parker, the importance of practice was highlighted and the constant pursuit of working on the position helped to avoid any prolonged discouragement.

“For him, he’s arguably our hardest working guy out there,” Deis said. “With that kind of mentality and that kind of work ethic, it’s not a big deal for him. He’s smart and disciplined and focused enough to take care of himself.

Parker along with rookie Parker Sawka have the keys to the crease now and they’ve certainly run with the opportunity.

“He’s been around all year so I know him really well now and I try to push him every day and pushes me too,” Parker said. “He’s a great goalie and he’s going to get some time in the future, he’s just got to be ready like I was.”

The 2000-born Parker is 19-3-3 and backstopped Okotoks to its 13-game winning streak through January and into early February.

“We brought a guy in and we knew with Abel that he’s one of the best goalies in Canada,” Deis said. “But with Brady we knew what we had with him, with the capability of what he can bring to the team.

“It’s not a shocker with us, he took over how many jobs last year? So we knew that he’s capable of good things for our team and we feel confident with him.”

Prioritizing team defence and keeping the opposition off the scoreboard are hallmarks of the Oilers with Deis behind the bench and the 2019-20 campaign is no different.

Okotoks has allowed just 128 goals against, second only to Sherwood Park.

“As a team identity we want to make sure our goalie is the best player on the ice,” Deis said. “One of those things we concentrate on is making sure that we’re doing everything we can in front of that goalie to make him feel good and confident.

“And when we do screw up our goalies are there to try and bail us out.”

Though having a three-goalie picture and one who leaves midway through the season for a collegiate opportunity is somewhat unusual, it’s hard to argue with the results.

Abel, for his part, is excelling at the next level and was named the Hockey East goaltender of the month for January.

“Just with the circumstances last year in June, the Oilers had an opportunity to get Abel and we went out and got him, that is what it is,” Deis said. “But everything has worked out great for Brady and for Sawka, we’re really happy with what the future has for our goaltenders.”

Home wasn’t so sweet during this home-and-home set.

First, the Eagles put a stop to the Oilers’ 13-game winning streak by taking the 5-4 shootout victory on Feb. 7 at Pason Centennial Arena.

Canmore sniper Alex Young scored a hat-trick and added another marker in the shootout. Ethan Schaeffer also scored in the shootout while Okotoks’ Brandon Machado was the only Oiler to score in the three-round showcase.

Turnabout was fair play the following night in the picturesque Rockies.

Okotoks scored four unanswered after Young opened the scoring just 90 seconds into the contest to take the 4-1 result.

This week the Oilers skate in three divisional games in a five-day span.

First, Okotoks is home to the Camrose Kodiaks on Feb. 11, followed by a Valentine’s Day date in Brooks and a Feb. 15 clash with the Drumheller Dragons back in the Pason.

With just six games left in the regular season, the Oilers sit three points up on the Bandits for top-spot in the division. For more go to okotoksoilers.ca.