Okotoks United gets green light to return to training 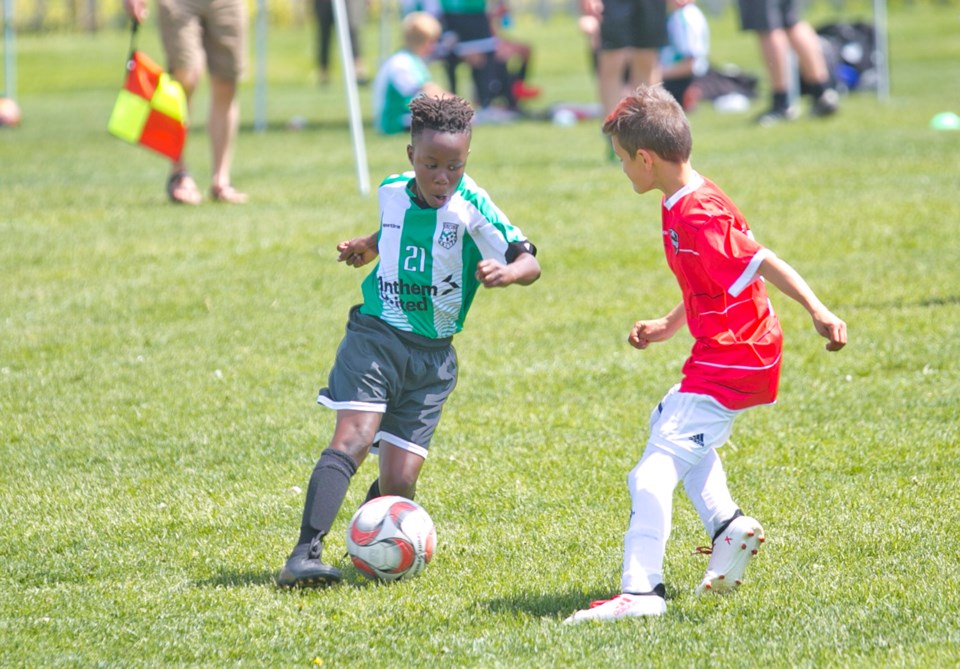 After months on the sidelines Okotoks soccer is getting back on the pitch next week.

Okotoks United Soccer’s outdoor competitive stream returns to training on June 22 with its recreational and grassroots program soon to follow as restrictions on youth sports begin to ease in the province.

“We already had plans approved for a Phase-1 return, we haven’t had Phase 2 plans accepted by the province yet – that’s coming later this week by Alberta Soccer,” said Okotoks United technical director Matt Lumsden. “So Phase 1 is individual training, small group and individual training within restricted areas of players.

As part of Alberta’s second phase of the economic relaunch, which began one week earlier than expected on June 12, outdoor youth sports teams are allowed to compete in mini-cohorts of up to 50 people. The measure opened up the door for sports with smaller rosters, including soccer and baseball.

“We’ve tried to stay in good contact with everybody the last few months, we’ve had an online training program going the last three months – we’ve also had a number of social gatherings with teams to keep them updated,” Lumsden said. “We’ve had things such as quiz nights, to keep everybody engaged.

“I think it was (June 4) that we had announcements from the provincial governing body, Alberta Soccer, that we were basically able to enter Phase 1 and start planning around the guideline document that they implemented. So that triggered us to come up with our own return to play strategy, which we had to submit to the Town and we also had to submit to the governing body for approval.

“We have that approval and have that green light as of (June 15) to start running programs, but we’ve extended it another week just so we have our logistics in place, we can complete some more staff training and we can have a brief registration window for our competitive program as well.”

Okotoks United will be operating with an abundance of caution, as Lumsden noted the club is going above and beyond the recommended health and safety guidelines.

“For our competitive program that starts next week we’ll have designated drop-off and pick-up areas in the car park, each player will be required to check in to a session and go through a hand-sanitizing station both before and after their session,” Lumsden said. “We also have staggered start times to make sure there’s no crossover between groups of players and then all of our equipment is sanitized both before and after the session.

“We’ve put a lot of measures in to ensure the safety of our participants.”

For Okotoks Soccer, the second phase relaunch will bring its grassroots and recreational programs back to what it has seen in previous years with internal competition between teams within the association.

“The Phase 2 announcement this week allows us to run up to 7 vs. 7 games internal within our club and I think with a maximum of 40 players,” Lumsden said. “It will basically be four teams of 10 that will be playing in a mini-exhibition or tournament structure within the town. That’s for our recreational program, the U9 plus, they play that similar format anyway.

“And then the grassroots program they play smaller 4 vs. 4 game and some training so they’ll be able to do that as well.”

The missing piece at this point is the external league competition for its competitive program, of which Okotoks has 15 teams, which would be part of the third phase of the relaunch.

“Our competitive program is going to go for 12 to 14 weeks depending on the league season, we have a training program in place all the way through that and then we’ll add the games program to it when the phased restarts are announced from the province and the governing bodies as well,” Lumsden said.

“Obviously it’s not the outdoor season we would have hoped for, but based on how things have transpired the last few months, even a few weeks ago, I think we’re seeing some really encouraging and positive signs that we will have a league program this year. I know the Calgary league is working diligently to put something to place and I’m hopeful we will be able to have some sort of late-August or even early-August and September fall season.”

And at this point, any incremental return to normalcy is a welcome bit of news for everyone involved.

“Being socially distanced within households the last few months not only has prevented and our young athletes from being physically active, but also the social side of it is a huge component,” Lumsden said. “I think, just the ability to interact with their peers and train in that environment will be a huge relief for those parents and those players and provide us with an opportunity to get back to normal.

“I think everybody is looking forward to it.”

For more information go to okotoksunitedsoccer.ca