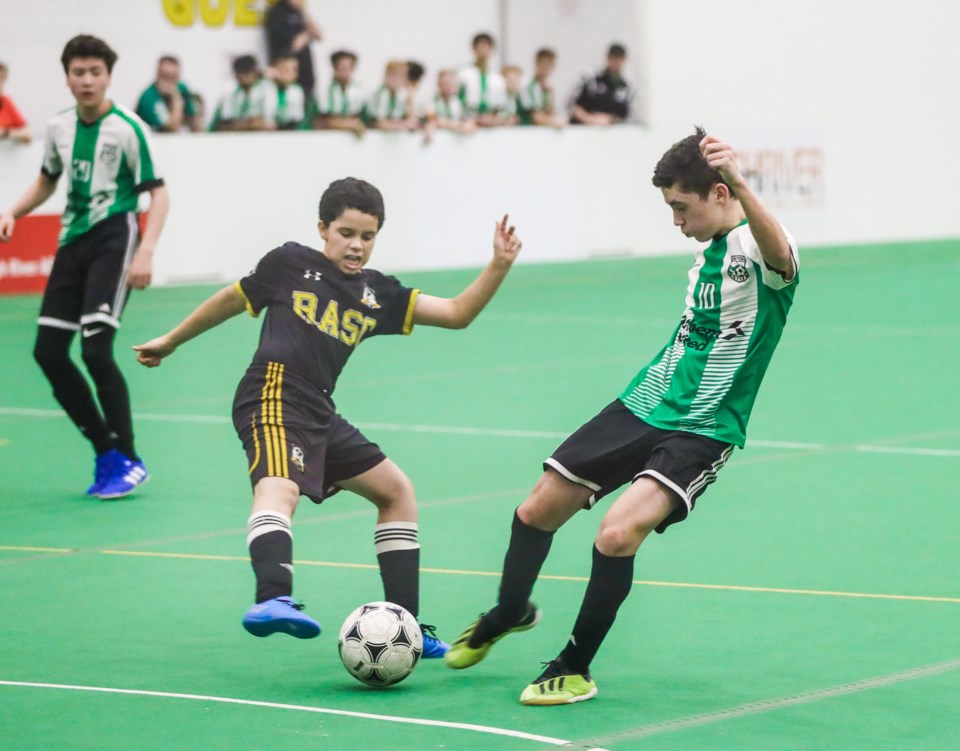 The new provincial regulations announced on Nov. 12 have put indoor team sports, including Okotoks United's indoor soccer pictured above, on the sidelines for the Nov. 13-27 period as Alberta combats the rising number of COVID-19 cases and hospitalizations. (Brent Calver/Western Wheel)

Team sports in the Foothills is taking a two-week hiatus.

And for minor sports associations in the Okotoks area, the new provincial health regulations to mitigate the spread of COVID-19 barring indoor team sports and group fitness from Nov. 13-27 are a tough pill to swallow.

“It did catch me off guard, but I heard a rumour a couple days ago that this might be coming down,” said Todd Melton, head coach of the Okotoks Mavericks Swim Club. “It was still a shock to all of us. I just showed up at the pool and the second I arrived people notified me.

“It’s actually depressing and to be honest I don’t know why they’re targeting our groups.”

Melton said the chance of spreading the virus in a chlorine environment within aquatics is very low, citing studies done in the UK that back up that statement.

“It’s a hard pill for us to swallow because we were just getting back into it and I was really enjoying it because we’re spending so much time on the technical component because we’re not racing,” said Melton. “We’re getting some huge gains by doing a lot of footage and technique. We just ordered a SMARTboard and we have an underwater camera and we do a lot of video footage.

“Things were going really well so it’s so unfortunate that this happened.”

Melton said with lane swim still available at the Riley Minue Pool, he’s encouraged his swimmers to go to the pool individually and train and he can then review the video of their training and offer virtual coaching from there.

“Our worry is two weeks will extend to two more weeks,” Melton added. “Because I don’t see a difference happening with these restrictions to our numbers. That’s my concern is that we won’t get back in until Christmas.

“The victim of this is the kids, you’re taking away something that during these hard times is so important to them.”

After an encouraging start to the indoor soccer season, Okotoks United has also had to halt its club activity for 14 days.

“It did catch us a little bit by surprise that it was just team sports that had been chosen for the restrictions rather than sports generally or wider restrictions put in place,” said Okotoks United technical director Matt Lumsden. “I guess it’s the fact of close contact between players that’s the issue and (Premier Jason Kenney) mentioned the fact about social gatherings after the fact as well and that there had been instances of COVID spread in those circumstances.”

Lumsden said it’s disappointing news given the hard work of Okotoks minor soccer as well as associations in the city to meet or exceed the guidelines in place by Alberta Health Services and Alberta Soccer.

“It’s unfortunate that despite doing this and having little to no instances within soccer that we’ve been unfortunately chosen to stop,” Lumsden said. “It’s been going fantastic, our club has been stable with its membership and we’ve seen consistent membership numbers from last indoor season. We’ve manipulated our programs for the limited cohort which has been well received.”

League play was running as close to normal as possible prior to the interruption with United fielding 12 teams playing in the Calgary Soccer League.

Lumsden said most of the teams in the competitive stream have had one or two league games following an exhaustive pre-season.

“Everything was ticking along quite nicely,” Lumsden said. “It’s unfortunate, but we respect the guidelines and the directives issued by our governing bodies so hopefully it’s no longer than two weeks and we can get back on the field.”

Okotoks minor hockey, and its robust membership over the 1,400 mark, is also significantly impacted by the new measures as well as all of the AA and AAA teams part of the Okotoks Oilers Athletic Association.

“Not overly surprised, obviously we didn’t want it to happen, but we saw with the cases going up, especially in the Calgary area that something probably was going to be done,” said Jamie Steer, operations co-ordinator for Okotoks Minor Hockey. “I feel for the kids, it’s taking away something that they sort of need. I’m hoping people honour it and in two weeks we’re back playing.”

Hockey Alberta announced the measures apply to all levels of hockey save for those at the collegiate level and the Alberta Junior Hockey League.

All team activities, from practices to dry-land training to any gatherings, is barred for 14 days.

“We started about 10 days later than normal, but we had an accelerated evaluation season and we pretty well had our teams and our cohorts picked on the same day we would normally,” Steer said. “We were going to stay in cohorts a little bit longer, but we were told the leagues are going to start so we went with the teams, so for the most part we were going almost on schedule.

“Two weeks out of right now I don’t think it’s going to affect a lot, but let’s just hope we’re going back on the 28th.”

Steer said he expects mixed reactions from membership on the new measures.

“For me, it just seemed like watching the news and seeing what’s happening and hearing of more people I know being around it and surrounded by it, it wasn’t going to turn on its own.”