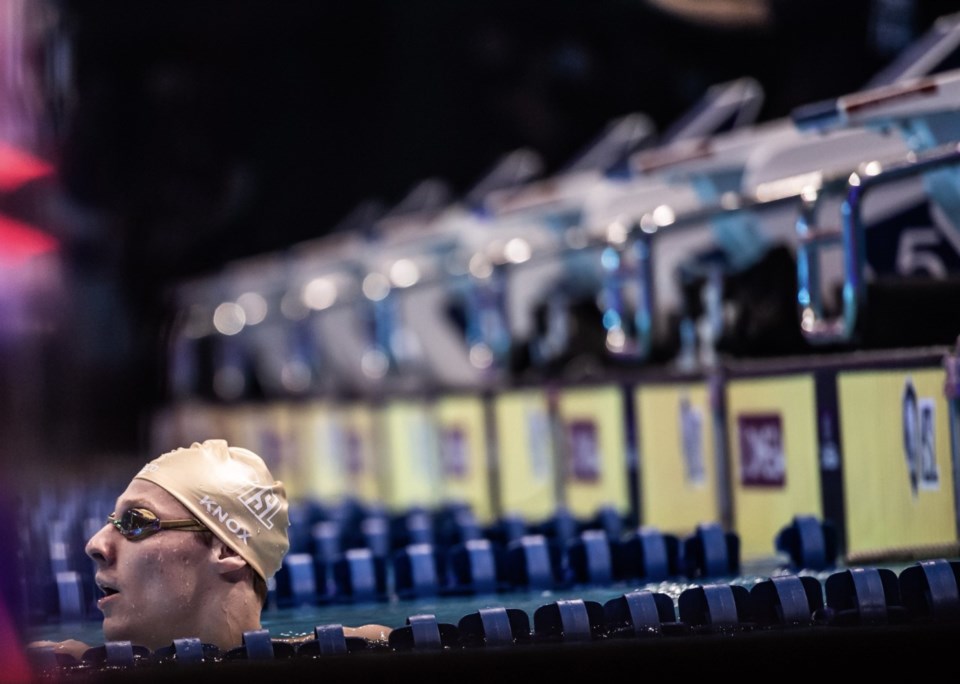 Finlay Knox might want to make Budapest an annual destination.

Every time the Okotokian comes back from the capital of Hungary he brings back new achievements in the pool, the latest a pair of new Canadian records in the 200m and 100m individual medley on consecutive days from the International Swimming League’s bubble.

“I personally think there’s two different types of swimmers, there’s the trainers, who train their hardest and give whatever they have in the pool, and then there’s the racers who no matter what circumstance are able to just go and race,” said Knox, who last year was a double medallist at the World Junior Championships in Budapest. “I’m definitely one of the racers so having eight months without races, it was weird.

“Going into the races I wasn’t as confident or knew what I was meant to do. It took me a little bit to get into it and remember how to swim and compete against everyone. But it was just like riding a bike once you do one, two, three swims.”

Without fans in the stands, having elite teammates and competitors has a way of bringing the best out of the swimmers.

“I love going to these really big competitions, going in I know I’m not the fastest, not the tallest, not the biggest athlete there,” he said. “Before you head out, normally you’re pretty nervous because there’s so many great athletes, they’re absolutely crazy, training animals and just think they’re superhuman.

“Once you get there, you realize there’s nothing really special with them. They work hard and they swim fast. That makes everything feel a lot better because you can go back and think they’re training hard so I’m training hard. I know I can compete with that.”

The 19-year-old, a member of the Toronto Titans ISL team that also features Olympic medallists Kylie Masse, Brent Hayden and Emily Overholt, set the Canadian records on back-to-back days during semifinal action at the ISL competition.

First, Knox lowered his own record in the 200m IM by almost 1.5 seconds, touching the wall in a time of 1:53.67 and finishing fourth in the semifinal.

“Being a younger athlete, still growing, still developing, I just have a lot more power, I’m putting on a little more weight,” said Knox, the Okotoks Mavericks Swim Club alumnus. “Every time you race at these bigger competitions you just learn so much and get more experience and ultimately you just become more confident.”

Knox — who made big strides in the butterfly, breaststroke and freestyle with some struggles in the backstroke — was confident going in that anything was possible despite all the interruptions this season.

“Going into it, even though we had the least amount of training I think I’ve ever had in my entire life leading into a competition, I knew that physically I was just in as good a shape if not better than I had been at previous meets,” he said.

On Nov. 16, Knox made it two national records in as many days by establishing a new benchmark in the 100m IM that stood for 10 years under previous holder Jake Tapp.

Knox finished in 52.36 in the ISL race, touching the wall seventh, in the final that saw American Caeleb Dressel establish a new world record.

“That was a new event put into these meets, and I will sound a little bias because I swam it, but I honestly think it’s the most fun event they have to offer,” he said. “It’s 25 (metres) of each stroke, it goes by really fast and everyone no matter who it is will do it, just because it’s fun.

“That’s why you’ll see Dressel, a butterfly-freestyle specialist doing it, you’ll see someone that’s a 400 or 200 IM (racer) going down to the 100 sprint, everyone does it so there’s lots of competition, lots of big names. And as a younger up-and-coming swimmer who hasn’t had that much experience racing big names, you just have to really focus on yourself and not let that overwhelm you.”

He had come close to hitting the mark earlier in the competition and entered the season with a personal best of 54.69 in the 100m race, making up huge ground in the back half breaststroke and freestyle legs.

“I had another race later that day so I didn’t even really process that I was in a race where a world record had been broken or that I had broken the Canadian record until half an hour later once I finished my cool down,” Knox said.

“It’s really exciting being able to be in an event where everyone who’s the fastest in the world will swim it.”

Knox finished the competition with personal best swims in all of his individual events.

The ISL competition took place in a bubble featuring over 300 swimmers from 10 teams. The ISL is in its second year of operation and brings a new wrinkle to the sport with high-energy broadcasts and knockout formats.

“It was pretty surreal being there after all that’s gone on,” Knox said. “The bubble has been going on for six weeks now and there wasn’t a single case that came back positive. It was very well put together, every one was very careful and to be in one location, a hotel, for a whole month it was absolutely the best experience.”

Knox said the bubble had the athletes isolated on an island on the Danube River where on a typical day the athletes swam, had their meals and were allowed outside for 90 minutes per day.

While the restrictions are stringent, it led to a daily routine and the kind of structure that many athletes thrive under.

“Every day was pretty much copy and pasted, but you got into a routine,” he said. “A lot of athletes like routine, like familiarity, we were able to find out what works best in terms of getting good training in, prepping for swimming fast and rest-recovery.

“Once you found that you stuck with it.”

Knox, a 2019 Foothills Composite graduate, has been training extensively out of Swimming Canada’s High Performance Centre in Toronto — featuring the majority of the nation’s Olympic level athletes in the pool — since the middle of summer.

Earlier this year, Knox was one of seven recipients of Swimming Canada’s Victor Davis Memorial Award which assists young swimmers in pursuing their dreams.

Foothills businessman elected to Hockey Alberta board
Nov 28, 2020 8:00 AM