Okotoks: Matt Lloyd preparing to get on ball field after first year of pro ball.
Jul 27, 2020 9:31 AM By: Bruce Campbell 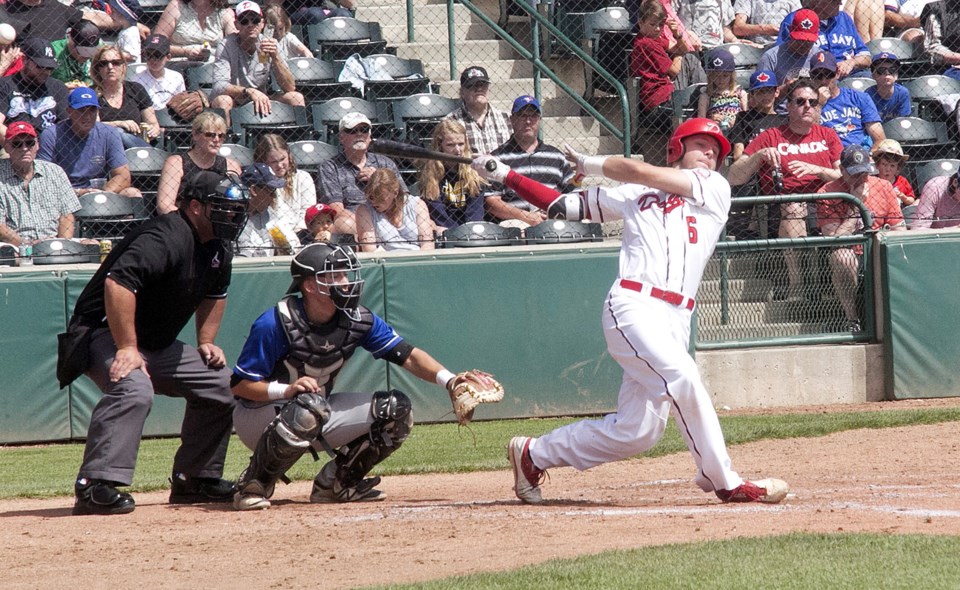 Matt Lloyd fouls off a pitch while with the Okotoks Dawgs. The Okotoks resident is at home after his second season of professional baseball was put on hold due to COVID-19. (Wheel file photo)

A graduate of the Okotoks Dawgs is watching the boys of summer this season on TV from his Okotoks home rather than being on the diamond.

And it leaves him with envy as green as the ivy at Wrigley Field.

Lloyd, who was drafted in the 15th round by the Cincinnati Reds in 2019, went down to Arizona for spring training in March, but like snowbirds across Canada he was called home due to COVID-19.

“I was in Arizona  for a month before being sent home,” said Lloyd, a graduate of Foothills Composite High School. “Then I was supposed to break camp before going to Daytona, Florida… There was a group of us, who went down to Arizona early. We played some scrimmages. I just wanted to get my feet wet and get a feel of how it was going to work.

“That first spring training can be kind of intimidating.”

He had one day of official spring training before being called home.

The outfielder played for the Reds’ Rookie League affiliate the Billings Mustangs and the A League Dayton Dragons last season and had been pegged for the Advanced A Daytona Tortugas, of the Florida State League this summer.

Lloyd put in a steady workmanlike effort in his first year of professional baseball, hitting .245 with five home runs in 27 games in Billings and and .224 and three dingers in 23 games at the higher level A League in 2019.

“In Billings, it felt similar to summer ball (Okotoks Dawgs), playing every day,” Lloyd said. “When I got to Dayton, it felt a little bit more like pro ball, a bigger stadium, a lot more fans.

“It was a lot of fun, there is no other job I would rather have.”

He said at Dayton he came up against a lot of pitchers who could throw in the upper 90s.

“I thought I played pretty good defence out there.”

While with the Billings Mustangs, one of his coaches was Darryl Brinkley, who hit the legendary .400 mark with the Calgary Vipers.

“He was a good dude,” Lloyd said. “He had a connection with some of the coaches I knew from this area, like Lou Pote (of the Dawgs Academy)."

Lloyd has touched the magic hitting plateau himself — his average was .400 in 2017 with the Okotoks Dawgs.

For now, Lloyd is working out at home with former Dawg Dane Tofteland, who is living at the Lloyds’ residence.

“I got home March 14 and 15 and the gyms were closed as well, so I was just trying to workout from home,” Lloyd said. “It was tough. I just tried to do the best I can.”

He is now also working out in Calgary with a trainer.

“My main priority is just trying to keep my body strong, build a bigger foundation when we actually do get called back,” Lloyd said. “It’s like another off-season almost.

“Hammer the weight-room and get stronger.”

He said he permission from the Reds to play independent ball in the United States this summer but opted not to due to the COVID-19 situation south of the 49th parrallel.

There is talk of an informal camp in the fall. As well he is considering playing winter ball in Latin America.

“But there is nothing concrete yet,” Lloyd said.

As for something a little bit more concrete, Lloyd took a positive step towards his future after baseball.

He has graduated from Indiana University, where he played for the Hoosiers and was first team Big 10 in 2019.