Four athletes will represent artistic swimming club for the first time in six years at Games
0
Feb 8, 2020 9:00 AM By: Bruce Campbell 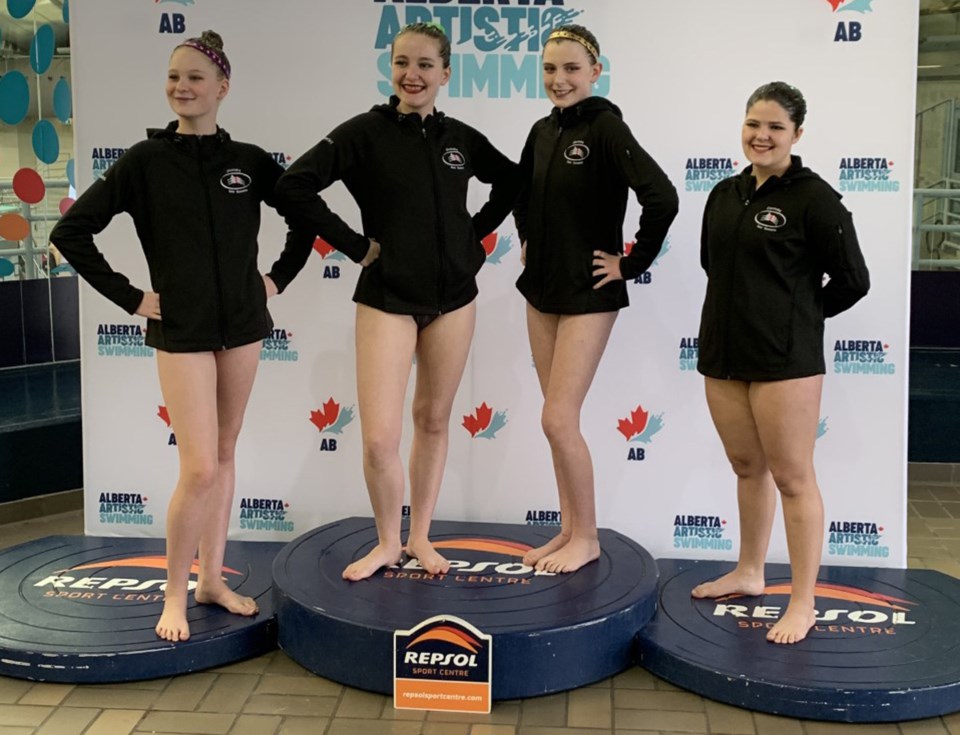 Four athletes from the Okotoks Synchro Sea Queens will compete in the Alberta Winter Games Feb. 14-17 in Airdrie — the first time the club has been represented in six years.

“This is pretty great,” said Sea Queens coach Shawna Koski. “There are a lot of people in the artistic swimming community who are excited to see us there because we haven’t been there for so long.

The Sea Queens contingent was like an atom — there was unexpected power when it was split. It was originally a team of four but in order to take advantage of the swimmers' strengths it was split into two teams of two —the duos of Haley Cipperley/Sophia Miller and Camryn Stearn/Sevrina Brookes made the Zone 2 team at a qualifying meet in Edmonton in December.

“Originally we were a team of four but then we got split off,” Miller said. “I think it turned out really well because Haley and I have a similar style of swimming.

Both teams are going into the competition on a high-note. Recently Stearn/Brookes finished first in the novice division at a meet in Calgary on Jan. 31-Feb. 2 while Cipperley and Miller were right behind them.

All four athletes finished in the top 13 in individual patterns at the Calgary meet.

Stearn and Brookes have bonded since becoming a team — something that just happened by accident when they were goofing around at the pool one day.

“Camryn is really fun to work with,” Brookes said. “When we are brainstorming ideas for the routine, it makes it easy because we both work really hard.”

Hard workers, but they do it with a smile on their faces and a good-attitude.

“They both have a similar fun-loving attitude that shows in their performance,” Koski said.

“We made a lot of facial expression and you get marked on your artistic ability — we’re pretty artsy,” Brookes said.

“They are both very graceful and very strong with their figures and they are synchronized,” Koski said.

They swam to the somewhat appropriate Upside Down by Paloma Faith. Artistic swimmers spend more time upside down than a pineapple cake.

Miller is in her first year of artistic swimming.

“I came to a tryout because I was looking for a new sport and Shawna asked me if I would be interested in joining the competitive team because it  seemed like I could do better,” Miller said.

Cipperley has always had a knack for rhythm and timing

“I was a dancer for the majority of my life but I got tired of it,” she said. “I saw the banner for the Okotoks Synchronized Sea Queens, I signed up and I have been doing it ever since and that was four years ago.”

She is amazed at the talent of her rookie partner Miller.

“I am extremely impressed and I am super proud of her because I know how hard this sport is,” she said. “I struggle and I have been doing this for four years.”

Don’t let the fact the swimmers are always smiling fool you — it takes plenty of effort.

“Lots of people say it is not a sport,” Stearn said. “It is a sport because the basics of it is pretty much upside down and holding yourself up while underwater, and doing dance or acrobatics.”

The four girls have helped rejuvenate the Sea Queens.

“We had been recreation but this year we started competition up again,” said Koski. “There were quite a few swimmers who asked for competition again – wanted more of a challenge.”

For information about the Games go to https://albertasport.ca/alberta-games/winter-games/