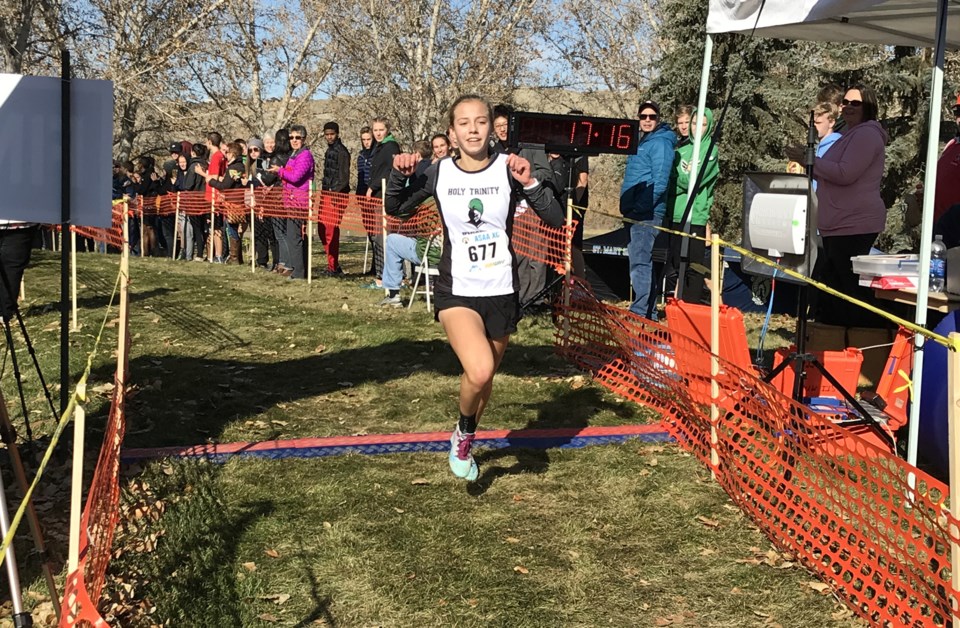 Come upon something tough, it’s best to grin and bear it.

Holy Trinity Academy Knight Evonne Henning bore down and got it done in winning the Junior girls 4,000m at the Alberta Schools Athletic Association’s cross-country championships Oct. 19 near Medicine Hat.

“I am very happy, especially because of the conditions,” the Grade 10 Henning said. “The course was really hard and challenging…All of the training and hard work really paid off. I kept a positive outlook throughout the race. I did exactly what I wanted to do and even better.”

“My expectations were I just wanted to run my best and just maybe finish in the top 10,” Henning said. “But when I started running my legs felt great and I was a lot calmer. I saw one girl in front of me and I said to myself: ‘I can do this.’”

Henning found herself in second place but with about a kilometre to go after three kilometres of rolling hills, she saw her opportunity.

“The entire way in the hills it was myself and this other girl, I would always be stronger than her on the up-hills and she was stronger than me in the downhill,” Henning explained. “In the last kilometre, I pushed it.”

She said the athlete she was chasing faded and finished out of the medals.

Henning is the first female to win a cross-country championship for Holy Trinity Academy. Michael Quick won a gold medal in 2011 for the Knights.

Holy Trinity Academy Knight Cadence Laplante cracked the top 10 with a ninth-place finish in a time of 18:48 in the Junior girls division.

A fleet-footed Falcon stood on the podium for the second consecutive year at the high school cross-country provincials.

Erika Cunniam took home the silver medal in the 5,000m Intermediate girls at 20:54.

“It was the hardest 5K course I have ever run,” she said. “After about 700m you had to run up a steep hill and the rest of the race was a lot of rolling hills.”

Cunniam and eventual winner Sadie Sigfstead separated themselves from the rest of the pack shortly after the first hill.

It's a respected rivalry. Sigfstead was first last year — just ahead of the second-place Cunniam.

“I love having competition in a race, I definitely like having her in it,” Cunniam said.

Their times would have also topped the Senior girls who also ran 5,000m.

Cunniam and Henning are both members of the Calgary Warriors track club.

“I was very happy for her especially as it’s her first year of high school and it is a great confidence boost,” Cunniam said. “I knew she had a great shot at winning and I am very happy she was able to achieve such a great accomplishment.”

The Strathcona Tweedsmuir Spartans were third among 2A schools at the ASAA championships.