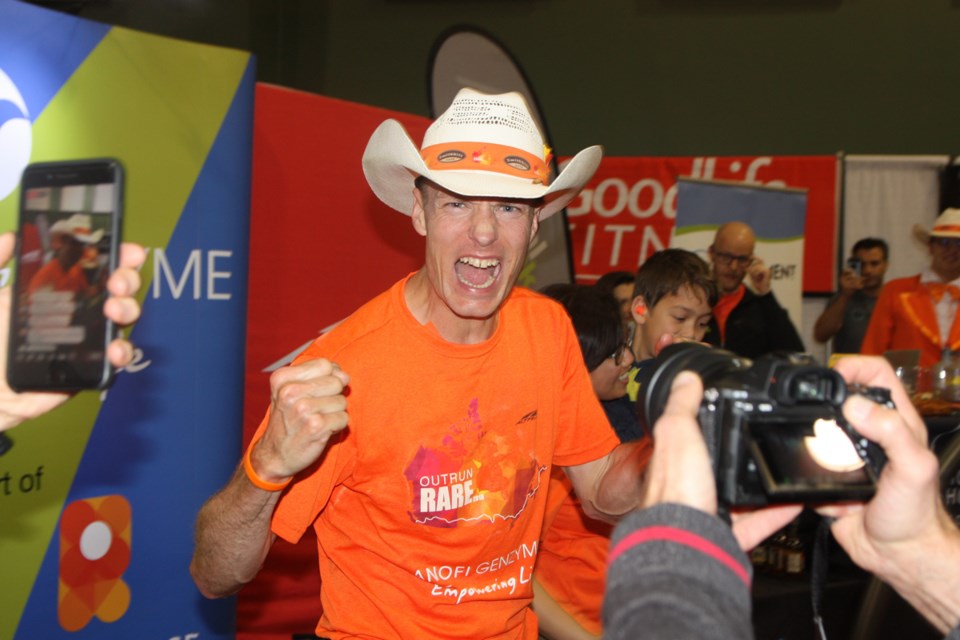 Dave Proctor, here celebrating his record-breaking run on a treadmill in May, announced on Sept. 14 he will once again attempt to break the cross-Canada running record in 2020 to raise funds for Canada Rare Disease Foundation. (Bruce Campbell/Western Wheel).

Dave Proctor will once again attempt to break the record for running across Canada, he announced at a fundraiser for the Canadian Rare Disease Foundation on Saturday in Edmonton.

“I want to get back on the highway — I kind of have unfinished business,” Proctor said in an interview on Friday. “I want to finish what I started.”

Proctor is attempting to break Al Howie’s 1991 record of running across Canada in 72 days, 10 hours. The Okotoks runner attempted to run across Canada in 2018, but had to stop 2,415km in — just east of Winnipeg —due to a herniated lumbar disc.

He plans to start his run on Victoria Day in 2020. But this time he won’t be starting in Victoria.

“I learned a lot from 2018 – No. 1, I started on the wrong side of the country,” Proctor said. “Doing the Coquihalla Highway on Day 2 and 3 was wrong, the first week is really a warm, you end up getting fitter the further you go. Doing the Coquihalla and Rogers Pass on Day 7, that was a bit much.”

He may have come up short in his Herculean effort to cross-Canada, but not when it came to raising money for Canada’s Rare Disease Foundation. He raised a whopping $311,000 in 2018 for the foundation.

His motivating factor remains his 10-year-old son, Sam, who has a rare disease that affects balance and mobility.

As for his back, if recent events are any indication, it’s rock solid.

Proctor broke the longest distance ran on a treadmill over 12 hours when he was clocked in unofficially at 153.8km at the Calgary Marathon Expo in May. As well, he worked some overtime by setting the fastest time covering 100 miles on a treadmill when he finished at 12:32:26.

More recently he broke his own Canadian record of longest distance run in 48 hours at an indoor track in Milwaukee at 225 miles in August.

One of Proctor’s next run is the famed Big Backyard Ultra Last Man Standing in Tennessee in October.

For more information about Proctor go to outrunrare.com