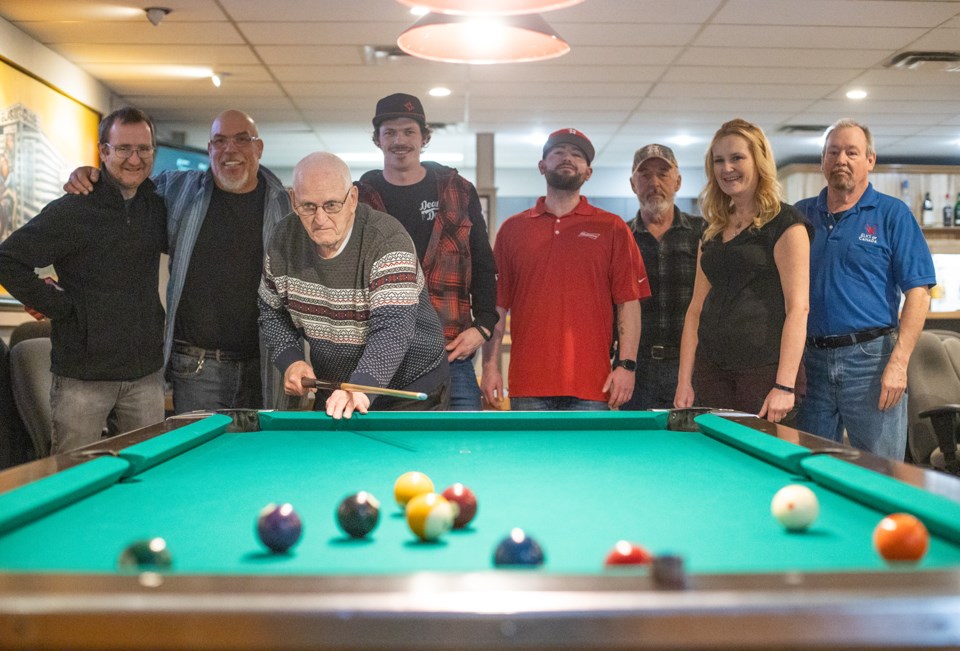 OKOTOKS ‑ An Okotokian had his dream 92nd birthday.

He got to shoot some stick, share some giggles with friends and family, help his community and watch his grandson win a nine-ball tournament that bears his name.

“It is great to see everyone together,” said George Carey on his 92nd birthday at the George Carey Nine-ball tournament wind-up at the Elks Hall on Feb. 8. “The way everybody is competing with everybody and my family is here – you want to cry at times.”

George held his own at the tournament, which had 49 entries and all the proceeds went to the Okotoks Food Bank.

“I got fifth in my rank and there were seven (players) – which isn’t bad,” George said.

He spent his youth in Montreal and started playing at 14 when he snuck out to pool halls – which back in the 1940s didn’t have the best reputation.

“My mom and dad finally found out and they eventually bought a small table – I learned a lot from other people,” George said.

He eventually moved to Calgary and taught his family the game. However, his expertise at teaching caught up to him.

“They enjoyed it, but now they are playing so good they even beat me,” he said with a smile.

One of the players that beat him in the tournament was his 26-year-old grandson Trace.

“He didn’t give me a shot,” George said with a chuckle. “I said a few bad words to him, but he shot good. No hard feelings. It’s a fun game.”

The tournament was won by George’s 32-year-old grandson Joel Carey.

“That’s great – I taught him how to play pool and I taught his dad Bill how to play too,” George said with a laugh. “Now they are all kicking my butt.”

Joel called it an honour to win the tournament named after his grandfather.

“It’s awesome, I have been trying for seven years,” said Joel, a 2006 Foothills Comp grad. “This is grandpa’s tournament. I have played in the Okotoks league with him for five or six years now.

Joel defeated Lori Stach in the final on Saturday. It was a final that hit close to home.

Stach, the first woman to reach the final, has been helping organize the tournament since Day 1. That’s how she and Bill became partners.

The big birthday surprise for George was seeing his son Sean, who works in Abu Dhabi, walk into the Elks Hall.

“My son dropped in this morning – It’s good that I have a strong heart,” George said. “Never knew he was coming.”

Sean said he was in Ottawa for a course, and since flying back to United Arab Emirates is a long flight, why not take some extra time and drop in on the family in Okotoks?

“It’s dad’s 92nd and I didn’t tell anyone but one brother I was coming, so I gave him a bit of a surprise today,” Sean said. “I just wanted to watch, hang out with dad and see how he played. He played well.”

The tournament has grown from 12 players to 49 since it started seven years ago. It is presently played over two nights at the Elks, In Cahoots, and Grand Central.

“We are going to have our biggest year ever,” Bill said. “Every year it has just kept getting bigger. To see this tournament just travelling forward is amazing.”

George has no plans for the tournament to come to an end soon.

He had better watch out-- there is an up-and-coming Carey getting ready to take him on.

George is teaching Sean’s seven-year-old son Eli how to play when he comes out to visit.