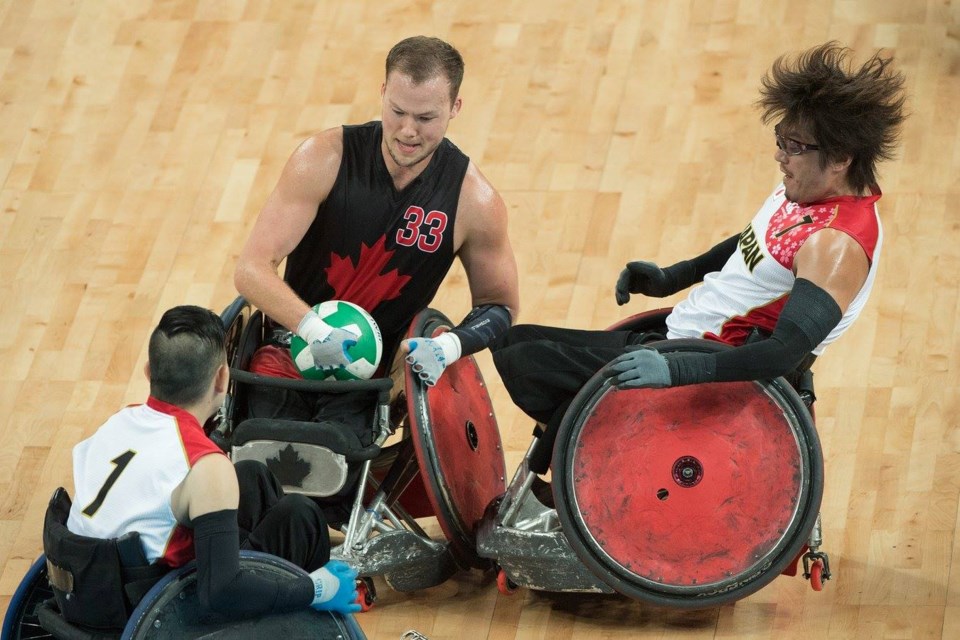 Okotoks' Zak Madell was set to compete in his third consecutive Paralympic Games with Canada's wheelchair rugby team this summer prior to the Games being postpoend to 2021 due to the COVID-19 pandemic. (Photo submitted)

A lot can happen in two weeks in the age of COVID-19.

And it’s no different for Olympic and Paralympic athletes as just 14 days separated Okotokian Zak Madell and the wheelchair rugby squad from qualifying for Tokyo 2020 and being told there would be no Canadian athletes competing at the Games.

“I honestly wasn’t too surprised to hear it,” said Madell, a 2012 graduate of Holy Trinity Academy. “I’ve been expecting something like that because we’ve had a handful already coming up that had been cancelled, including our national championships and a couple tournaments in April that aren’t going to be happening.

“So I think we all saw the writing on the wall and obviously we don’t want to take any unnecessary risks with this being such unpredictable territory for us.”

Madell, who starred for Team Canada at the 2012 and 2016 Paralympic Games, briefly walked away from the sport to focus on his schooling, finishing his diploma in architectural technology at SAIT last year, prior to returning to wheelchair rugby midway through 2019.

The International Olympic Committee on March 24 announced the Games were officially being postponed to 2021.

“Obviously when we heard Canada was backing out I think there was some disappointment because people had been putting all their time and energy in,” Madell said. “I had hoped the Tokyo organizers were going to try and do something about it considering how much they’ve put into it, time and financially, to make this happen.

“I didn’t think they would let all that get flushed down the drain, I figured there would be a contingency plan moving forward here.”

Madell said it’s extremely helpful to have the Games confirmed to be one year down the road, rather than speculating on how long a postponement could be.

“It’s good having that definitive answer knowing that it could be a year away because otherwise we’re just sitting at home looking at ways to train because all of the facilities for us are closed down,” Madell said. “I was lifting backpacks today with water-bottles in them just for a little bit of resistance force to deal with.

“It’s good knowing now that we have that extra year to, first and foremost have this coronavirus blow over hopefully, and then get back to some sort of normalcy in our lives.

“It’s almost not a bad thing considering it can give us that extra year. We were wanting to peak for that qualifier tournament a couple weeks back and now we’ve got a longer time as far as building up and preparing for whenever Tokyo happens.”

Exercise amid the social distancing directives consists largely of following videos offered by Team Canada trainers, making use of household items in lieu of workout equipment.

Fortunately for Madell, social isolation consists of being with his roommate Branden Troutman who happens to be a wheelchair rugby teammate.

“It’s just making sure we’re moving,” Madell said. “It’s not the ideal situation, it’s not going to be as good of a set-up as we have over at WinSport, but this way hopefully we can maintain some of the gains we’ve made and not take too many steps backwards while we’re trying to be isolated.

“It definitely helps to have somebody else to be going through things with, it’s a little more entertaining than just lifting weights by yourself.”