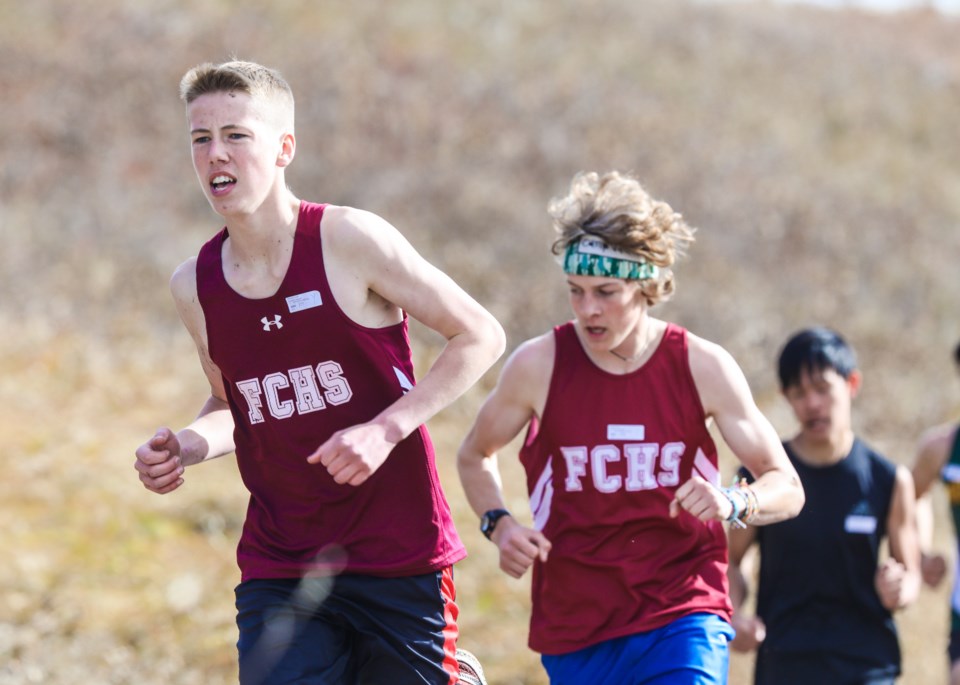 Foothills Falcons Carson Derkson and Sam Jobson were first and second at the South Central zone cross-country championship on Oct. 16 at Strathcona-Tweedsmuir School. They will both run at provincials Oct. 19 in Medicine Hat. (BRENT CALVER/Western Wheel)

A pair of close running friends had a slight difference between themselves at a cross-country race this week.

Foothills Falcon Carson Derkson finished first in the Senior Boys 6,000m at the South Central Zones championships on Oct. 16 at Strathcona-Tweedsmuir School. He was followed by teammate Sam Jobson.

“Carson just killed it – he was going crazy, I couldn’t keep up with him,” Jobson said. “I'm personally happy with my run – it could have gone a lot worse, and it’s nice to have a medal.”

The pair crossed the finish line together two weeks earlier in the divisional championships.

“We do that at divisionals because there is not as much competition as zones,” Derkson said.

But what the heck do you do with the first and second place medals when you cross the finish line?

However, things will crank up to more serious stuff on Saturday (Oct. 19) when the pair race at Alberta Schools' Athletic Association championships near Medicine Hat.

“I am excited about provincials, I think I can do a lot better than last year,” said Derkson who finished in the 30s in the championship last year. “But last year at zones I was seventh. Hopefully I have improved over the year. I want to be top 10.”

The pair's running friendship evolved through cross-country with the Falcons and then took off when they were both members of the Okotoks Track and Cross-country Club.

“It’s super-hard to find friends who are the same pace as you,” Jobson said. “We help each other grow into better runners.”

Their passion for running comes with a bit of pain. They were running hills in Okotoks two days before zones.

There was another another set of teammates who finished 1-2 at zones.

“It was quite challenging because it was a little bit slippery,” Henning said. “It was fun – a true cross-country race.”

She isn’t putting any pressure on herself for provincials.

“I’m just thrilled to be able to go I and just want to run my best,” Henning said. “If I come top 10 I will be thrilled. It’s going to be nice to run against other competition."

Henning comes by her running talent through hard work and a touch of genetics. Her mother Elize completed the Boston Marathon in April.

Laplante said she was pleased with her run.

“It was a bit slippery and muddy which scared me a bit,” said Laplante, who is also a member of OTCC. “I want to crack top 10 at provincials."

It was a tiring couple of days for Laplante. She is a member of the Knights soccer team which defeated the Foothills Falcons in the Foothills Athletic Council final the day before cross-country zones.

Foothills Falcon Erika Cunniam, who was second at provincials last year, was first at zones, winning the Intermediate girls 5,000m in just over 20 minutes.

It was her first race since injuring her foot the day before the Sheep River Road Race in September.

“It got super-painful,” Cunniam said. “I am feeling great, my foot is totally healed for cross-country season.

“If there was a time to be injured that was the perfect time. I didn’t miss anything important or qualifying meets.”

She said she was pleased with her time at zones as the STS course is hilly and slippery.

As for provincials, bring it on.

“I hear the course is tough,” she said. “That kind of pushes me. It will be fun.”

The top 18 runners at zones qualify for provincials or next best if some can’t participate. Qualifying runners from the Okotoks area were: