Okotoks Oilers optimistic to be back on the ice soon

"Even if it's just small groups on the ice, I really hope that we can get back to that because I know lots of the guys are getting a little bored of home and I think it would be good for our mental health, too, being in the rink and with the guys."
Jan 9, 2021 10:00 AM By: Remy Greer 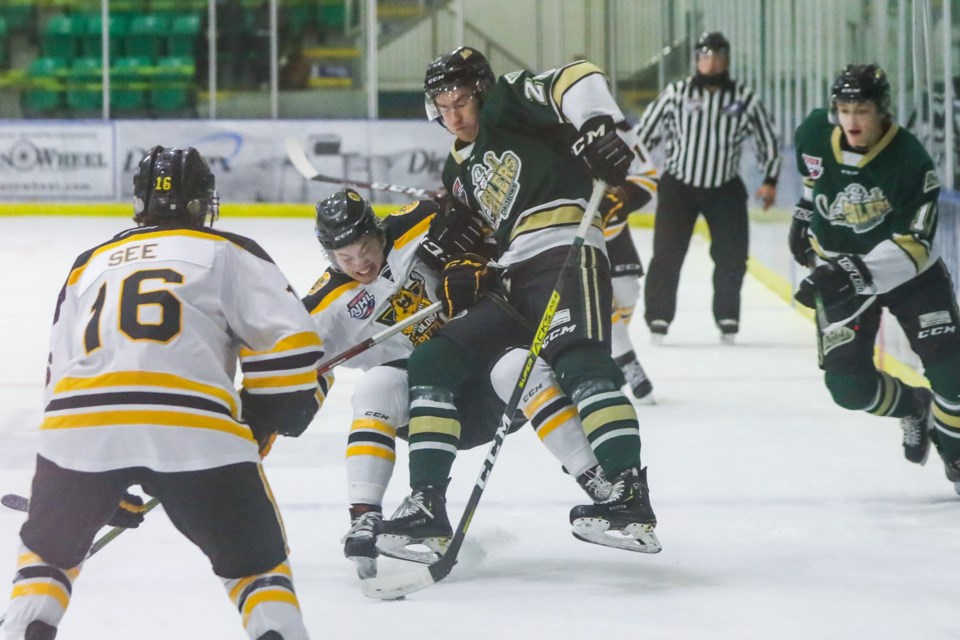 The Okotoks Oilers haven't seen game action since mid-November and have yet to play a home regular season game with the AJHL regular season on pause. (Brent Calver/Western Wheel)

Absence has certainly made the heart grow fonder for members of the Green and Gold.

After being sidelined for close to two months, the Okotoks Oilers see the potential to return to play in the near future as a distinct possibility.

"I think we're optimistic. Our commissioner (Ryan Bartoshyk) is doing a phenomenal job representing our league with the government," said Oilers head coach and general manager Tyler Deis. "I'm super excited with them at least getting us back to practising here and then kind of seeing where we can go from there.

"Ryan has done a phenomenal job and I don't know if we could ask for a better guy to lead us through this."

For Zane Kindrachuk, Okotoks' longest serving player in his fourth season with the Green and Gold, it's especially difficult to be away from the game after having gone through the experience last spring and incrementally getting back to the ice in the fall.

"It kind of sucks especially coming back from six or seven months going back to last March and we were finally able to come back to Okotoks and start practising and start playing games," he said. "The guys were really enjoying being around together after being gone for so long and then the second wave hit and we got shutdown again. That was tough because the season just started to get going and we thought we would maybe be able to keep playing.

"It's tough, but we all understand that it's a little bit bigger than hockey right now."

Keeping connected while apart can take many forms.

"Each day I contact a handful and just make sure that the communication is there," Deis said. "Once we know what's going to happen with these restrictions, they're going to be re-evaluated and hopefully positive things happen from it and we'll go from there.

"Just trying to be super-optimistic, these guys have their off-ice training programs with their skills and their training so they're busy and they're holding themselves accountable and making sure they stay as fit and focused as possible."

For the players, there are bodyweight training plans set up by assistant coach Reid Hnatowich and many of the Oilers have home gyms to keep fit.

It's hard to replicate the feeling of skating in a dry-land situation, however.

But that's a challenge they're hoping to get a chance to overcome soon, even if it's an incremental return to the ice.

"The big thing for us is focusing on what we can control, staying in shape and keep working out, to be ready if and when we do go back," he said. "I really hope that, even if it's just practising and maybe the whole team can't practise together, but just getting back to Okotoks and being with the guys on the ice and in the room, that's something I'm really looking forward to.

"Even if it's just small groups on the ice, I really hope that we can get back to that because I know lots of the guys are getting a little bored of home and I think it would be good for our mental health, too, being in the rink and with the guys."

When asked about the team's morale amid the restrictions in place since November, Deis said it's tough on them, but they're not alone in dealing with difficult situations right now.

"They all seem pretty good, no one is really going to tell you exactly, I think it is hard on them," the coach added. "But they're not the only people that it's hard on, it's hard on all of these kids and all these people in the province.

"They're mature enough to know that they have to adapt to the situation and try and get the best out of it and I think most of the kids have been doing that."

Another adjustment the Oilers will have to make is adapting to the departures of two of its key players with top centres Jack Works and captain Louis Jamernik moving into the NCAA for the second half of the 2020-21 season with the University of Denver and North Dakota, respectively.

Both players had previously committed to the schools and planned to begin in the fall of  2021, but openings on the lineups coupled with the AJHL being on pause presented the forwards with the terrific opportunities to move up the ranks.

"We're super excited for these guys. I got the phone call from both organizations wondering where we were at and what we thought," Deis said. "And we basically said 'this is what we do, we want to move guys on to that next level when they're ready.'

"And those schools decide when they're ready and I believe that both of those kids are ready to go and I think it was a huge opportunity for them and the organization is super excited for those two and it's well deserved."

Deis said there will be decisions made on the leadership group, with the team's captain now playing south of the border, when Okotoks as a team is allowed to be back together as a group.