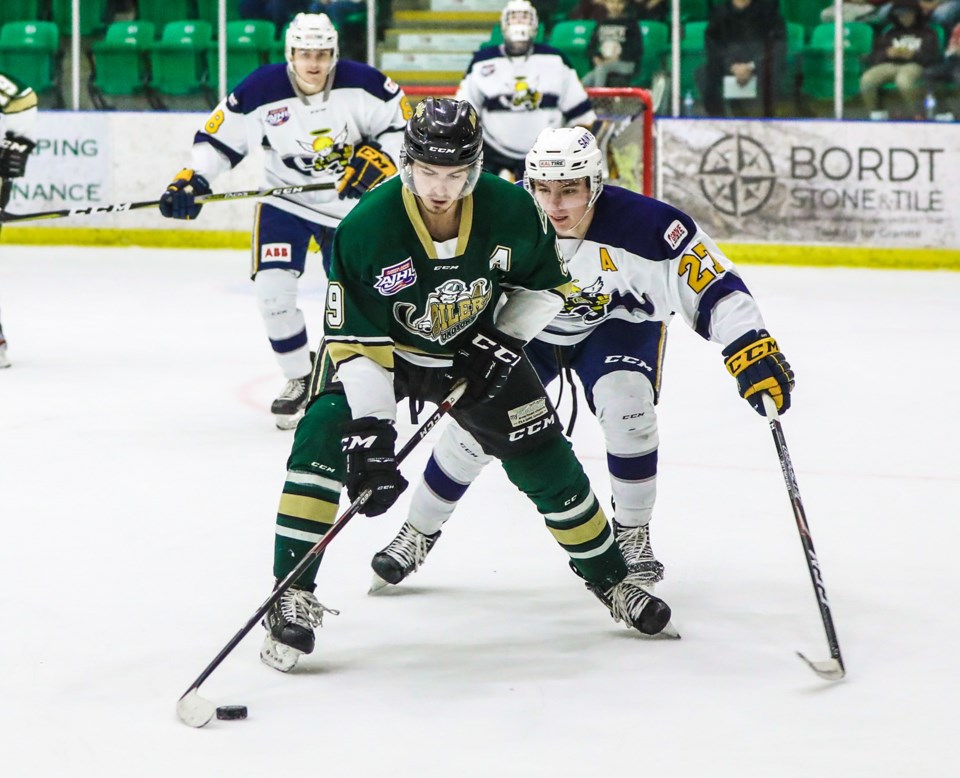 Okotoks Oilers forward Louis Jamernik will wear the 'C' as the team's captain for the 2020-21 season. (Brent Calver/Western Wheel)

The Okotoks Oilers have a new leader on the ice and in the dressing room.

Fourth-year centre Louis Jamernik was named the captain of the Oilers, the club announced last week, as the Alberta Junior Hockey League squad readies for the resumption of play in the 2020-21 season.

“(Head coach Tyler Deis) told me at the exit interview at the end of the year where everything came to an abrupt end,” said Jamernik, a North Dakota commit. “I was blown away and really honoured and I’m excited just because having pretty much the whole group back with the exception of the twenties is going to be huge for us next year.”

Jamernik will lead a motivated group boasting a healthy dose of unfinished business.

Okotoks, the top-seed in the AJHL’s South Division, had its playoff hopes sidelined before the second-round as the COVID-19 pandemic put sports on the sidelines in mid-March with the Green and Gold considered one of the favourites to claim its first league championship.

“It definitely hasn’t settled yet,” said Jamernik on Victoria Day. “Today would have been the day for the national championship, not that we were assuming we would make it, but that was the goal for our group.”

Though it’s been two months, it’s going to take more time for this wound to heal.

“In our group chats we’ve been talking about it, joking about it,” he said. “It still sucks, still not over it, but it is what it is and we’re still chatting about it every day.”

Jamernik takes over the captaincy after serving as an alternate to captain Ayden Roche-Setoguchi last season and learning from Kyle Gordon the year prior.

He picked up varied tools of the trade from both former teammates.

“It’s cool because those two guys are very different people in terms of how they were captains,” he said. “Ayden was just a silent, lead-by-example leader, he was a great guy in the room and same with Kyle, just Kyle was a little more vocal.

“It was cool to see two different ways of controlling the room.”

As for Jamernik’s leadership style, the versatile centre plans to put an emphasis on setting up teammates for success on and off the ice.
“For me personally, I’m a very vocal guy as well so I would say I’d be very similar to Kyle,” Jamernik said. “I like to lead by example as well and I really care about what’s going on in the room and how guys are, not just on the ice, but I think off the ice stuff really matters as well.

“That’s something I do a little differently in terms of team builders and more camaraderie.”

Coming off a career high 51 points in 53 games during his second full season with the Oilers, Jamernik is not putting a ton of stock on numbers going forward.

“I’m just hoping to win, that last part with the playoffs, have a huge playoffs,” he said. “For me, it’s not so much about getting points as it is preparing myself as best I can for college level of hockey, the skill and speed part of the game, and also just the mental part of my game.

“Just give myself the best chance to play college hockey.”

Timelines for the 2020-21 AJHL season are still to be ironed out amid the COVID-19 pandemic, but the players are getting ready for the season to start with a normal September schedule.

“We’re trying to get prepared and treat it like a regular summer in terms of training and work,” said Jamernik, a course maintenance worker at the Hamptons Golf Club in Calgary during the off-season. “It’s kind of week to week right now and Deis will update us as we get more information, but we’re just going to try to be ready for a regular August camp and take it from there.”