“It’s really a testament that people are excited to get their kids back out and participating in activities.”
Jun 9, 2021 2:00 PM By: Remy Greer 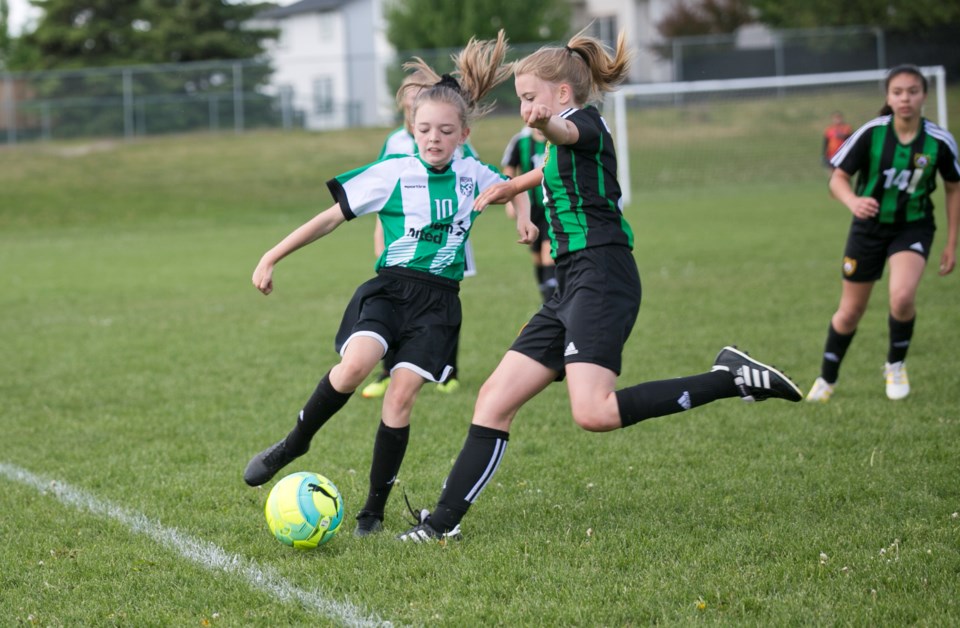 Okotoks United Soccer could return to game action in the coming weeks as Alberta's moves into Stage 2 and 3 of its Open For Summer plan. (Remy Greer/Western Whee File Photo)

As one of the highest profile competitions is set to take hold across the pond minor soccer is celebrating an imminent return to the pitch.

Alberta’s Open For Summer plan dictates that once the Province is in Stage 2 the restrictions on outdoor and indoor sports will be lifted -- a hurdle that could be overcome as soon as June 10 pending vaccination rates stay on track while hospitalization numbers continue to drop precipitously.

“It’s fantastic for all of our players to get back on the field,” said Okotoks United technical director Matt Lumsden. “We were, I think as most people were, pleasantly surprised with the speed in which we were able to transition from Stage 1 where we’re training distanced to Stage 2 and 3 where it’s a return to normal play.

“It’s meant that our program can get off the ground quite quickly and start contact games and contact training as early as Monday June 14.”

Team sports activities had been shuttered for most of May with Okotoks United seeing indoor training inside the Crescent Point Field House until the middle of April and didn’t get its outdoor soccer program going prior to the Stop the Spike restrictions that came into effect last month.

The timing worked out for the best.

“We actually chose not to start in early May, we determined hold off a week and let’s see where restrictions were so we didn’t actually start our sessions,” he said. “It’s a blessing in some ways as we were able to rejig some things a little bit and adapt our programs, basically restarting new.

“We’ve been able to offer registration again for some new players and include those that perhaps weren’t planning for this time around.”

Okotoks teams in the competitive stream will see league play kick-off in the Calgary Soccer Association as soon as June 15.

“It’s quite a short, sharp turnaround,” Lumsden added. “They’re training in a physically distanced capacity (last week) and then we will move to contact training in the back half of (this) week.

“The kids are excited to get back onto the field and back to playing games. Our job as coaches and technical leaders is to ensure their training loads and participation volumes are adequate so we don’t risk injury.”

The excitement is reflected in the numbers.

Despite the uncertainty regarding COVID-19, Okotoks has approximately 650 players registered with 11 competitive teams and close to 60 overall, including in its grassroots and recreational programming.

“It’s a fantastic response for such an uncertain season,” he added. “In our competitive programs, it’s held relatively strong and we’ve also seen a little bit of growth in our grassroots programs, at U5, U6 and U7, especially on our girls side which has been great to see.

“It’s really a testament that people are excited to get their kids back out and participating in activities.”

Last summer, Okotoks was able to get in some exhibition play against other teams in the region as part of a cohort model near the end of the season.

“We’re not going to have that cohort structure this year,” Lumsden said. “We’re going to be able to play everybody within a normal league system.

“They are itching to go. We had our first sessions (June 3) and it was a buzz and a certain atmosphere on the field and it was nice to see and something we’ve missed over the last year or so. They’ve been online for much of the indoor and then they got to train with their teammates, were back online again, and now it’s great to see everyone again get back to kicking a ball on a field.”

For more information go to okotoksunitedscoccer.ca.