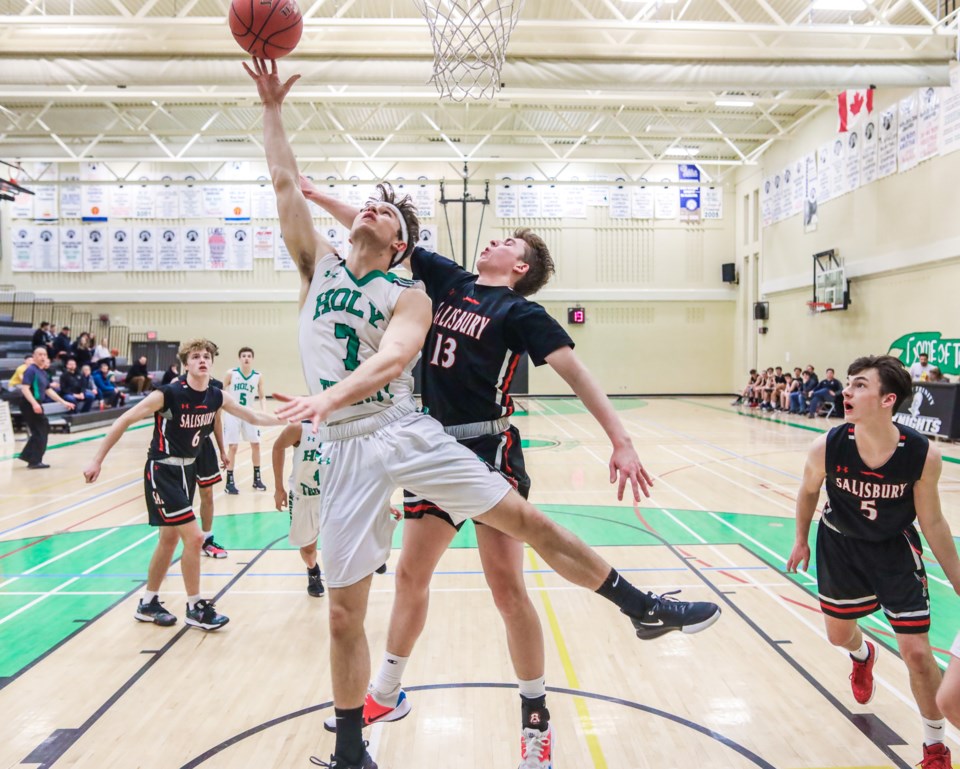 A Holy Trinity Academy Knight has earned his second ring of the school year.

Ben Leggett, a forward for the Knights, will receive a ring for being named MVP of the Father Michael Troy basketball tournament in Edmonton on Feb. 8.

Leggett, who also will receive a championship ring as quarterback for the provincial champion Knights football team, was a leader in HTA’s 80-52 victory over Red Deer’s Notre Dame Cougars in the Troy tournament final.

But early on, it was the Cougars who caused a roar.

The Cougs led by one after 10 minutes and at the halftime break, the Knights had a slim 35-32 lead.

“They played a really aggressive 2-3 zone, they were really scrappy – all over the floor,” Aiello said of Notre Dame. “We didn’t shoot great in the first half.

“We told our guys at halftime don’t panic, it’s good to be in a tight game.”

The Knights turned it on in the second half — giving clear indication as to why they are the No. 5 ranked 4A team in the province.

“We came out, made some shots and pulled ahead,” Aiello said.

Leggett had 17 points and pulled down 10 rebounds in the final. Elias Ralph contributed 18 points.

The Knights waltzed to the final. They opened with a 99-36 win over the St. Albert Skyhawks.

Every healthy member on the Knights squad contributed points in the victory.

“They have some decent players, it’s just that we are deeper,” Aiello said.

The Knights then advanced to the final by getting by the Bishop Carroll Cardinals 105-39.

Once again, every Knight had a number next to his name on the scoresheet. Leggett led the way with 17 points and Riley Thorn had 15 in the victory.

Although the Knights weren’t ever really tested, the tournament is more than basketball, Aiello said.

“I like bringing a new group of guys to experience what this tournament is all about,” Aiello said. “It’s about celebrating Catholic education. We got three basketball games, but on Saturday morning we had mass with 16 teams and had breakfast with 16 teams.

“It’s pretty special to be able to do that.”

The Knights won’t play another tournament until the Foothills Athletic Council playoff after the teacher’s convention break in February.

Meanwhile, Leggett might want to go to jeweller Wayne Austen for some advice. Leggett gets to design his MVP ring.