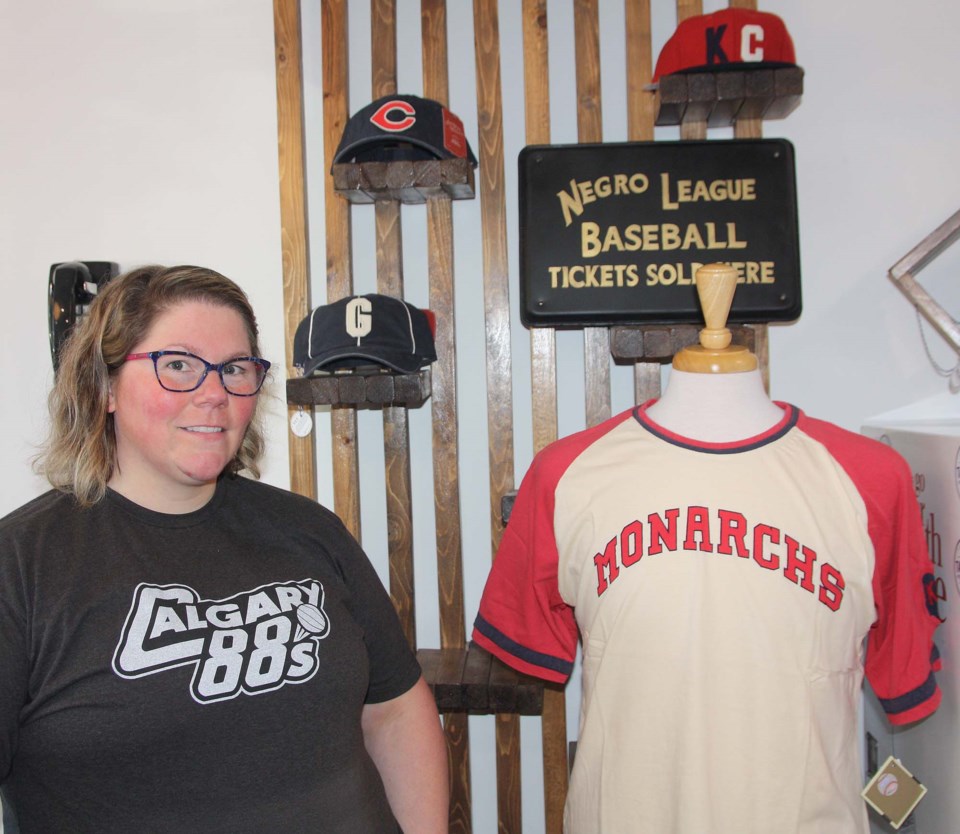 Robyn Alford, owner of Tailgate Mercantile in Okotoks stands with a vintage jersey and baseball caps from the Negro Baseball League. From top are caps of the Kansas City Monarchs, the Cincinnati Tigers and the Homestead Grays. The jersey is of the Kansas City Monarch. A portion of the sales of jerseys and memorabilia from the Negro Baseball League will go towards the league’s museum. (Bruce Campbell/Western Wheel)

A baseball fan is helping the sports’ former superstars get the recognition they are due.

Tailgate Mercantile is one of hundreds of stores in the world who along with artists, are donating portions of their sales to the museum.

Alford is an avid baseball fan. Some of the memorabilia on display at Mercantile include a small statue of Brooklyn Dodger pitcher Don Newcombe, one of the first black pitchers in the major leagues and a Wheaties Box with Pittsburgh Pirate great Roberto Clemente on the packages.

On display in her main window are jerseys of the Kansas City Monarchs, the Homestead Grays (Washington D.C.) of the Negro Baseball League.

“There were amazing ballplayers in the Negro Leagues.”

Her favourite player, Leroy “Satchel” Paige played for the Kansas City Monarchs, before becoming the first black pitcher in the American League with the Cleveland Indians in 1948.

“I would argue that Satchel Paige is the best pitcher of all time — not just the Negro Leagues,” Alford said. “He was ageless. He was also behind the barnstorming, which included Canada.

“I love all the stories about him. He was such a free-spirit.”

It is estimated that Paige, whose real birth date is a bit of a mystery, was 42 when he made it to the Major leagues.

She said the demise of the Negro Leagues started when Jackie Robinson became the first black player to play in the major leagues in 1947 with the Brooklyn Dodgers.

The Negro Baseball League folded in 1948.

“A lot of the Negro League players ended up playing in Mexico, Cuba, Canada because they didn’t want to play in the minor leagues or the Jim Crow South," Alford said.

Some of the great Negro League players include Larry Doby, Cool Papa Bell and the home run king Josh Gibson.

“They say he is the black Babe Ruth — or is it Babe Ruth is the white Josh Gibson?” Alford said.

She said while pre-1947 players like Ruth, Ty Cobb, Walter Johnson and others did not ever play against or with black athletes, Alford doesn’t believe there should be an asterisk by their records.

“I don’t feel there should be an asterisk, but I think the National Baseball Hall or Fame and Museum (in Cooperstown, N.Y.) could do a better job of showcasing the (Negro League) players,” Alford said. “I know they have incorporated them as part of the museum, but truthfully it is the Kansas City museum that really is historically accurate that unfolded in the league.”

Alford is holding her sale with proceeds going to the Negro Baseball League Hall of Fame from Oct. 4 -10.

For more information about the world-wide sale click here.