'If anything, going through this the last 15 months you realize what you’ve missed. The importance of our league to our communities will be again kind of magnified as things open up. Our facilities are gathering places for our communities and places where we can engage with those people who support us."
May 27, 2021 2:00 PM By: Remy Greer 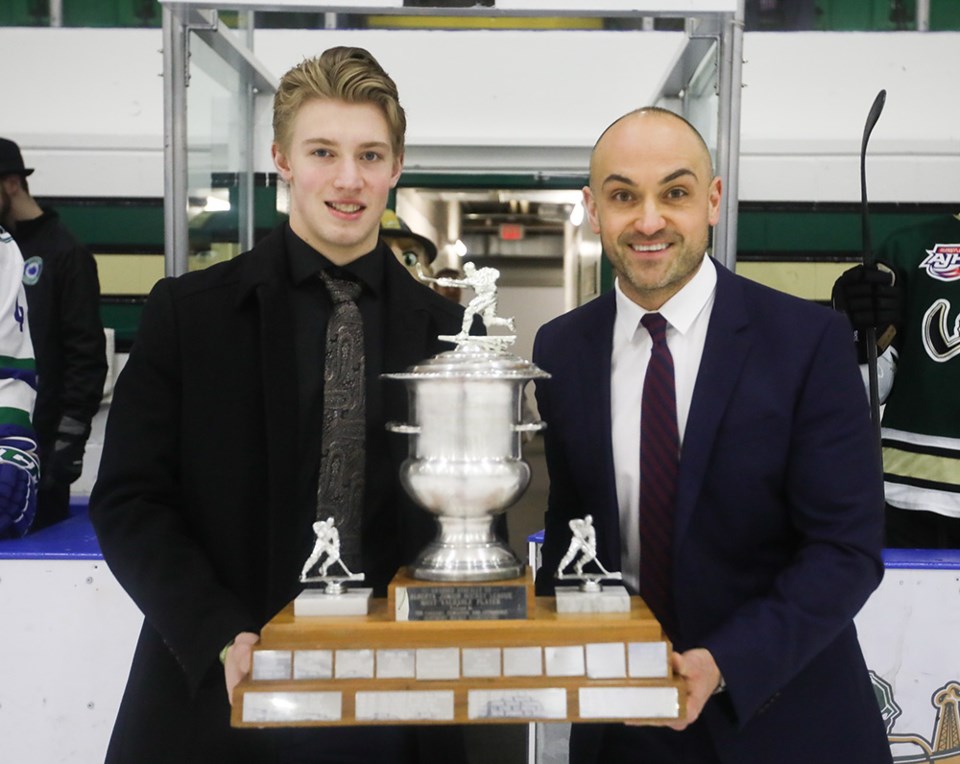 AJHL commissioner Ryan Bartoshyk, right, seen with former Okotoks Oilers forward Dylan Holloway, was able to work collaboratively to ensure the 2020-21 season went ahead despite its many challenges during the pandemic. (Brent Calver/Western Wheel File Photo)

An unwavering commitment to getting on the ice safely during an ever-changing season made all the difference for Alberta's Jr. A hockey loop.

“I think it’s the commitment that the league made and our teams made and our whole communities made to play,” said AJHL commissioner Ryan Bartoshyk, who calls Okotoks home. “Yes, there were some challenges just like there were across every other business, and I think we really came together as a league and collectively committed to our athletes.

“I think that’s the most important part to take away from the season.”

The AJHL began its exhibition season in October and got in 60 games before transitioning into the 100-game strong regular season, one which was on pause from late November into March. The AJHL returned to action from March until early May. The league followed a team cohort model to limit the number of teams playing one another over a defined period of time and subsequently reduce the number of contacts.

In comparison, the BCHL season didn’t see game action until April, the SJHL was limited to a November schedule and the Western Hockey League’s Alberta teams didn’t take to the ice until late February.

For Bartoshyk, the AJHL’s ability to buck that trend came down to its relationships and commitment level.

“Every province is a little different and going through its own things on a day-to-day basis and really it was just a combination of timing and communication and that relationship we built,” he said. “And ultimately the trust (health officials) put in us and our organizations to execute our plan.

“It was a lot of work from a lot of people, but we’re proud of what we were able to do for our athletes.”

Bartoshyk added there were challenges throughout the campaign and they had to work closely with the government and Alberta Health Services. During those times, the responsibility of the teams, athletes, billets and team staff really amplified the collective hockey community, he added.

“This year the support looked a little different than it did in the past,” he said. “Unfortunately, we couldn’t have fans in the building, but we really still felt that support from our communities as far as being able to play.”

The AJHL also benefited from its strong relationship with a dedicated medical officer of health who facilitated information and communication to the league office.

“There were a lot of groups coming to that table and we just wanted to make sure we came to the table with our best return to play plan and it’s something that we could execute,” Bartoshyk added. “It was important to build that relationship and moving forward here we’re going to have to lean on that too because it’s almost June and the new season starts and we’ve got to prepare for next year.

“Hopefully we’re back on plan and at some point here we can have people back in our facilities.”

Strict protocols had each team conduct weekly PCR testing through DynaLife and with any positive result a 14-day suspension of in-person team activities was imposed across the board.

The Okotoks Oilers played eight regular season games after being hit with COVID-19 in November and in the spring return to action. Practice and development sessions were plentiful, however, throughout.

After starting the development season without too many bumps in the road, the AJHL faced a big test in November when four South Division teams were in COVID protocol as the second wave of the pandemic began to take hold in the province.

“We were excited to get started, but ultimately respecting protocols in the province and respecting the safety of our athletes and our communities,” he said. “Unfortunately, we had to pause for a bit and again started the process to determine how we come back.

“Things changed back pretty quick, we were able to adapt and even within our return to play protocol throughout the last couple months we had to adapt internally.

“I can confidently say our protocols worked and we were able to protect our communities.”

When asked what an outright cancelled season would have done to the league, Bartoshyk said from a player perspective is where that would have been most felt.

“Getting those athletes back in the room, around each other, from a physical and mental health standpoint from a competitive standpoint that would have been the toughest part as far as what it would have done to our athletes,” he said.

Another hurdle to overcome was the limited room for in-person scouting opportunities with travelling and spectating at rinks at a minimum during the pandemic.

The league’s HockeyTV subscription programming along with established relationships between teams and college programs ensured the league could continue to get players the opportunities for exposure.

In Okotoks, netminder Brady Parker secured a NCAA Division I commitment to Clarkson University this year while Okotokian Jackson Kobelka of the Calgary Canucks committed to Albertus Magnus, just to name a few.

“Credit to the relationships that our coaches and organizations have with the scouting community and through HockeyTV we’re able to promote our athletes,” the commissioner added. “I’m really excited about this upcoming season as far as the talent in our league.

“I think this past year really introduced our league to a lot of younger athletes and, given the environment of the hockey world, a lot of players that could potentially go to school next year will stick around in our league for an additional year.”

The 2021-22 season will see the Blackfalds Bulldogs join the AJHL ranks and round out the 16-team league. The Bulldogs relocated to Blackfalds from the Calgary Jr. A Mustangs organization at the start of the 2019-20 season and have taken the past year to build up their new arena and establish the foundation of the franchise.

“They have a great group there that have put in a lot of work already,” he said. “As a league we should be excited to be back at 16. For all of our league, it’s a big year coming off the past year as far as re-energizing our communities and engaging them in a different way than we were able to this past year.”

And the hope is absence will make the heart grow fonder in 2021-22 with fans eager to take in what they weren’t able to over the past 15 months.

“Hopefully that’s the case and, if anything, going through this the last 15 months you realize what you’ve missed,” he said. “The importance of our league to our communities will be again kind of magnified as things open up. Our facilities are gathering places for our communities and places where we can engage with those people who support us.

“Most definitely looking forward to that.”

For more information go to ajhl.ca.