Okotoks' Dayton Sutherland, reporter Kass Patterson team up for After the Ninth
Jun 28, 2020 8:00 AM By: Remy Greer 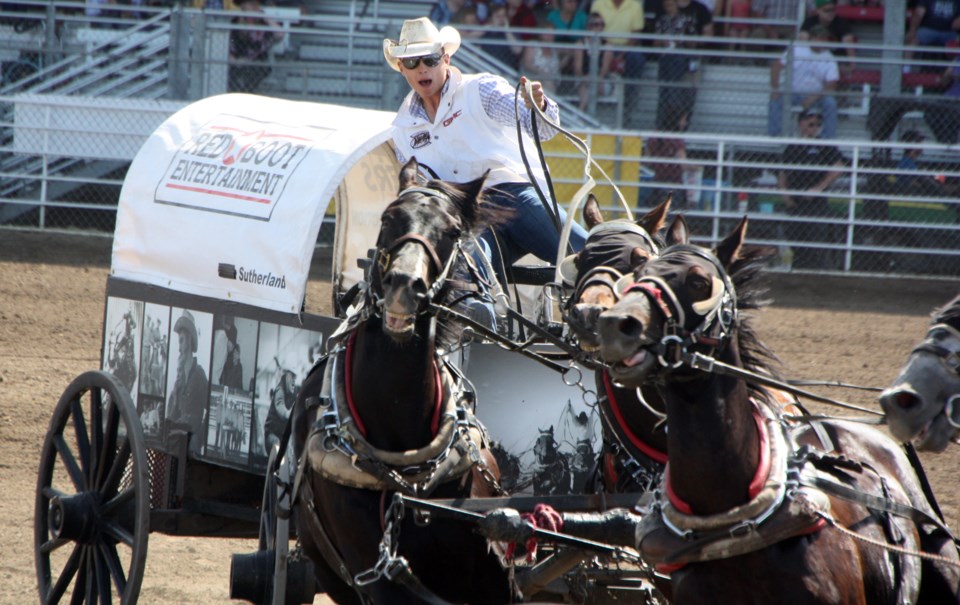 The insider’s guide to the world of chuckwagon racing is one download away.

Third-generation chuckwagon driver and outrider Dayton Sutherland out of DeWinton has teamed up with reporter Kass Patterson for the After the Ninth Podcast – promoting the sport from an insider’s perspective.

“My dad, grandpa, two uncles, two cousins, everybody in the family is fairly well oriented with chuckwagons,” said Sutherland, the grandson of Kelly 'the King' Sutherland and son of Mark Sutherland. “A lot of those guys I just mentioned spend a lot of their time and lives within the sport and are dedicated to growing the sport.

“My grandpa or my dad aren’t going to be the ones to get into the new technology of a podcast on the chuckwagon or cowboy world so I thought it was a natural fit for me.

“The whole goal is to promote the sport and help the association out (the World Professional Chuckwagon Association).”

Sutherland, a two-time Battle of the Rockies champion and WPCA top rookie driver in 2017, said he’s looked at getting a podcast out for some time given the popularity of the platform over the past half decade.

“I started looking at podcasts myself and I thought what an easy way to broadcast the races or talk about the races so people don’t have to tune into the radio all the time,” Sutherland said. “That was the original idea, for people who were working when the races were broadcasted, they could listen to it at any point, next day or next morning.”

After the Ninth came to fruition in the summer of 2019 when Patterson expressed frustration with how the sport was being covered by the mainstream media and how limited she felt the storytelling opportunities were on news radio.

“Dayton was running in the WCA (Western Chuckwagon Association) and I was reporting at 660 News,” said Patterson. “I was reporting on chuckwagons and I wasn’t happy with how the story was being told, I felt like we were missing a lot of conversations.

“…In Calgary specifically, if it bleeds it leads. And unfortunately there are people and producers in mainstream media who don’t want to look at the positives of the sport, they don’t want to cover the sport unless there’s a tragedy and it’s sad.

“I wanted to show not only the negatives, but there’s a lot of positives of the sport. I wouldn’t report on it if there wasn’t and I felt there were stories we weren’t covering because it wasn’t fitting the narrative that was out there.”

Patterson, a former reporter with Okotoks’ Eagle 100.9 radio and volunteer with the Okotoks Jr. B Bisons hockey and Jr. B Marauders lacrosse teams, has always had a passion for all things equine.

Sutherland said it’s much more difficult being on the other side of the interview and being the one asking the questions rather than fielding them as an athlete.

“It’s so much harder being on the other side,” he said. “Paul Bissonnette on another podcast I listen to, Spittin’ Chiclets, he always calls it driving the bus and it’s way, way harder to drive the bus … I struggle with it, it doesn’t really come naturally to me and just jumble around a bit.”

What the Foothills Composite alumnus does bring to the equation is an athlete’s perspective general media just doesn’t have.

“A lot of the guys I’ve interviewed so far I’m genuinely a fan of, we’ve brought on guys like Kurt Bensmiller, Rick Fraser these are guys that I grew up watching and idolizing. It’s fun asking those guys questions.

“And I can kind of relate because I’m a driver too and can look at it from a different angle than just your average reporter could just because I know the ins and outs of what these guys are going through.”

With the cancellation of the chucks season, the podcast has taken on some new iterations with the After the Ninth Race Review featuring Sutherland breaking down big events from the 2019 season. Additionally, Patterson hosts the Woman of the Wagons.

“It’s a really interesting project because I’m talking to the different women within the chuckwagon world,” she said. “It’s showing different story-lines and conversations that I don’t think have been heard in the sport before.”

As of this summer, After the Ninth has officially teamed up with the WPCA, which also has the Outside the Wagon podcast hosted by the association’s marketing manager Bryan Hebson.

“It’s nice to be able to promote the WPCA because as I like to define it, they’re the NHL, the CPCA is the WHL and the Stampede is the Olympics,” Patterson said. “This is such an unsure time, but there’s optimism for the future.

“I think it’s just trying to stay positive and seeing what happens in the future. (Chuckwagon racing) is a part of our heritage and I don’t see it leaving.”

The podcasts are available on all major platforms, including Spotify, Apple podcasts and Google podcasts.

For more information go to aftertheninth.com