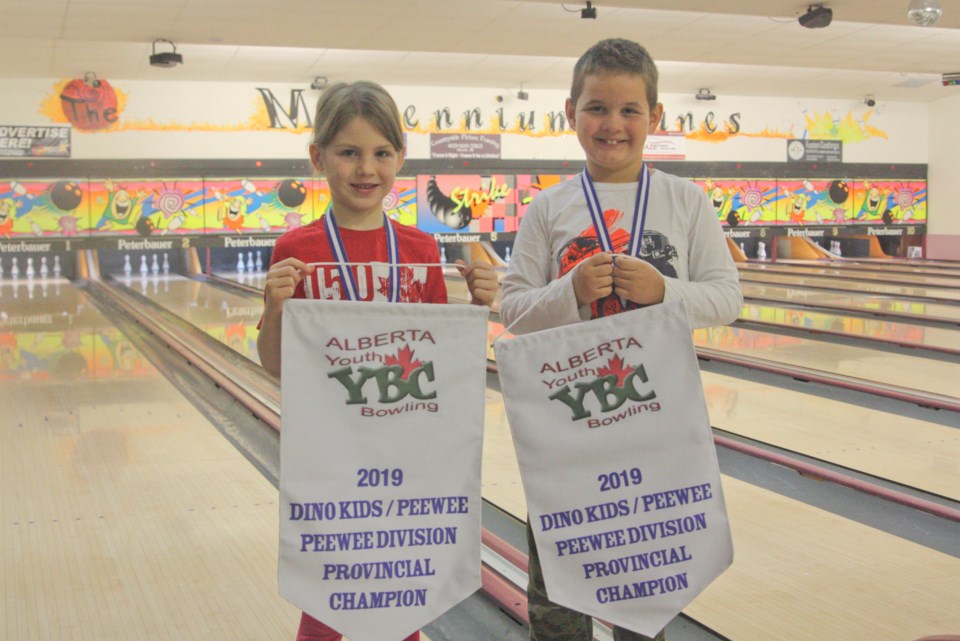 A sparkling debut and a repeat four years in the making are what Peewee championships were made of for a pair of Okotoks youth bowlers.

Lakic, 7, said he started bowling this year with his family. And family is a big part of his story with it in his genes as Lakic grandfather was a professional bowler.

“For Milos, being a new bowler, the learning curve is usually quite fast at the beginning,” said coach Kyle Honish. “So that’s what’s benefited him. You remember at the beginning of the year, (his) scores were around 50. And that just takes time.”

The provincial banner was based on performances from in-house tournaments held across the province with scores tabulated, sent into the provincial office and tabulated from there. Okotoks held its tournament in late-November.

“I was really surprised because my scores were a bit low,” said Elizabeth.

Elizabeth previously won the banner as a toddler at the age of 2.

Her season saw her switch from bowling with one hand at the beginning of the year back to two with great effect.

“That’s where she was comfortable,” coach Honish said. “And even comparing her two hands this year with her two hands last year there’s huge growth.”

Millennium Lanes has a proven track record at the province-wide event.

There are now seven banners hanging on the walls of the Okotoks bowling alley from the past nine events.

And the future continues to look bright, as coach Honish explained the younger age group is the largest at the club.

“I think we’ve got the largest under-8 group in the entire city area,” he said. “We have 19 kids under the age of eight and I don’t think any other centre has that number within the city limits.

The stretch drive of the bowling season is in the coming months as Okotoks’ older bowlers prepare for the run to nationals at the zones in February with the younger bowlers getting set for the annual Calgary Peewee Tournament at the end of March.

For more information go to millenniumlanes.com/youth_bowling_ybc