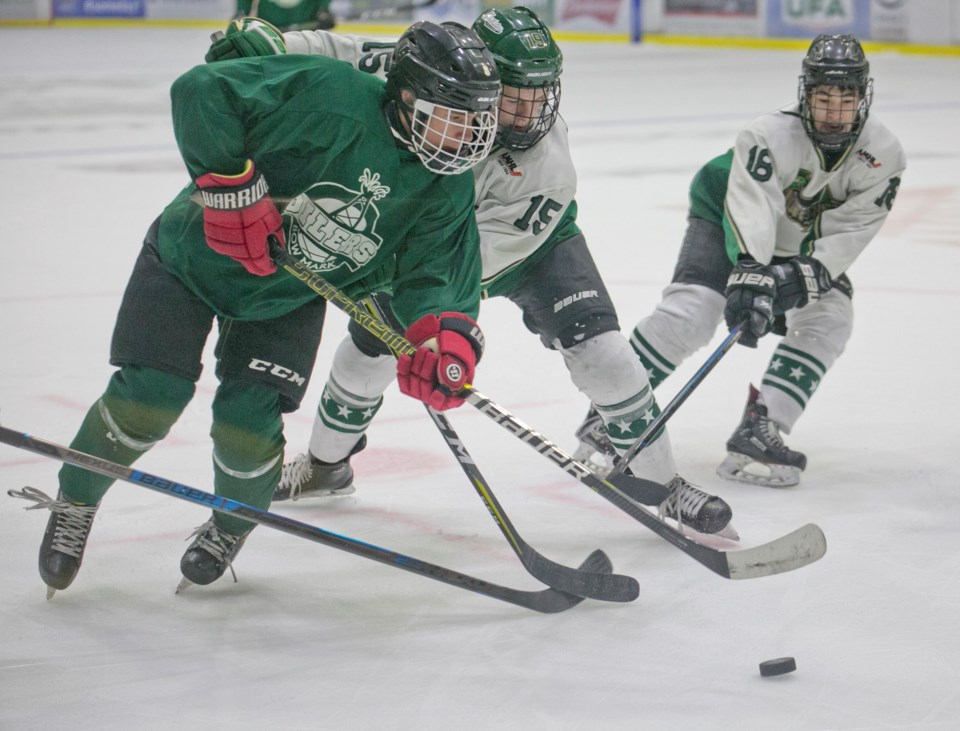 After a lengthy tryout process the Okotoks Bow Mark Oilers have their team finalized for their third season in the Alberta Midget ‘AAA’ Hockey League.

“At this level here this is a bit of fit and balance,” said Bow Mark Oilers head coach Ryan Barrett. “And we also try to pick the best possible players that can give the opportunity for the team to win and the group to be successful.

“I like our balance back there,” the coach added. “Blackwater is a big kid, Frank is a big kid, Watkins is a big kid, they can all skate. Daniel Walsh is a very steady, good skating defenceman with some nice size and our two young guys Scott and Law can really move.”

Kyle Newnham, Daniel Tainton and Simon Smith-Burness are making the jump from AA to AAA. The group also includes Ivan Chtchadov and Hudson Hall, who played in B.C. and Saskatchewan, respectively, last season.

“That’s where a lot of our speed comes from,” Barrett said. “Even some of our bigger bodies, they’re not necessarily super fast, but they’re quick.

“We’ve got some good size, some good speed and some good players that understand the game and think the game.”

Centre Liam Watkins, Lucas’ younger brother, is the lone 2004-born skater on the roster for Okotoks. High River’s Ethan MacIntyre and blueliners Scott and Law make up the 2003 group.

“Liam is a very high skilled hockey player, we believe we can fit him easily within an area that’s going to tailor to his game. He’s a 200-foot player for his age which is nice at this level,” Barrett said. “MacIntyre, his ability to shoot the puck is really good. He scored a bunch of goals in our tryout process. He’s physical, he can skate, he’s a kid you really couldn’t ignore throughout the tryout process.”

In goal, Okotokian Mitch Dudar, who starred last season with the Midget AA Oilers, and Airdrie’s Adam Goody will form the last line of defence.

“Mitch is ready to win as many games as he possibly can, I think his confidence is in the right spot and he’s really looking forward to the challenge,” Barrett said. “Goody is a 17-year-old who comes to us from Airdrie, we’re really happy to see him step on the ice and see what he can do.

“I think the two 17-year-olds can be a steady force back there for us.”

Okotoks wraps up the pre-season slate on Sept. 28 in Lethbridge.

The Bow Mark Oilers regular season kicks-off on Oct. 5 at home versus the Calgary Northstars, a 3:30 p.m. start at Pason Centennial Arena.

“I think we’re a fast team. I think we can skate,” Barrett said. “We’re a smart team and with the practices and some of the guys we’ve had come out and watch, our work ethic as a group is pretty good right now.

“We can always get better, but our guys like to challenge each other at practice and there is a lot of compete, which is fun to coach.”

Bow Mark got a head start on one of its chief goals for the season over the weekend, community involvement.

The team was out Saturday morning laying sod to help in the construction of the new playground at Okotoks’ Dr. Morris Gibson School.

“That’s our plan for this group, to get out there in the community and help where needed,” the coach said. “If we can do more things like that, we’re definitely going to be out in the community helping people.”

For more information on the team go to ooaaoilerhockey.ca