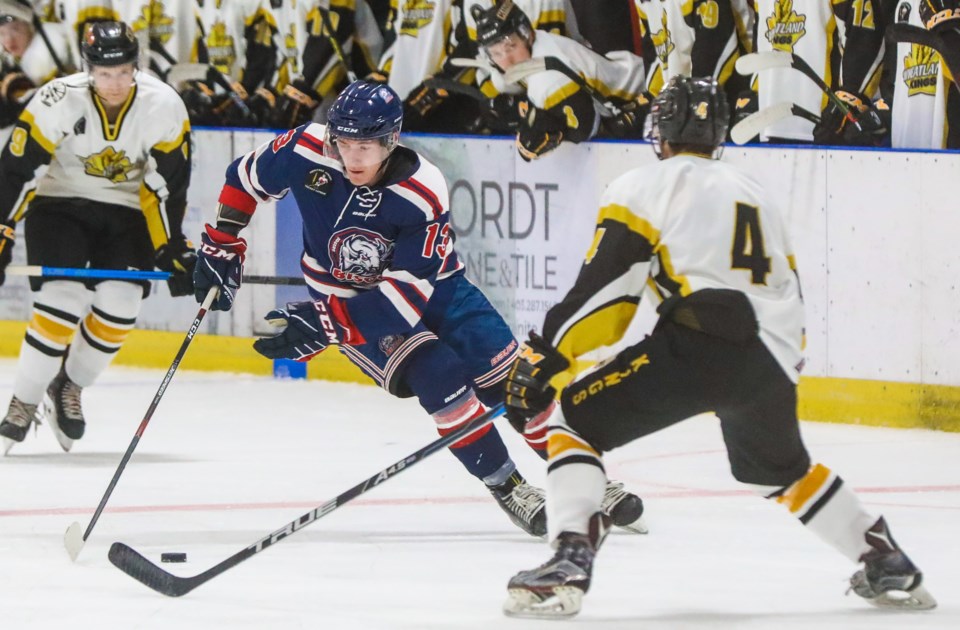 The Okotoks Bisons worked overtime to extend their undefeated start to the season.

Tyson Scott scored on the powerplay 48 seconds into the extra session as Okotoks (10-0) edged the Cochrane Generals 3-2 on the road on Oct. 19 as the Bisons winning streak hit 10 games in the Heritage Junior Hockey League.

“We knew it going in that it was going to be a hard-fought battle. We know Cochrane is a good team,” said Bisons head coach Chris Beston. “We showed a lot of good character battling back. We were down kind of the whole game.

“Midway into the third we tied it up, we had a penalty shot late in the third which we missed. We eventually stuck to our guns and started disciplined … and we capitalized in overtime.”

Ryan Bedard scored at even strength in the middle frame and Tyler Alger notched the game-tying goal in the final stanza on the powerplay.

Scott, the 1999-born forward from Turner Valley, then iced the result on the man-advantage with his 9th goal and 20th point in just eight games with the herd.

“Tyson has been fantastic to coach, he’s a great kid, he’s got a tremendous talent and he wants to be here, which is the main thing,” Beston said. “He’s an impact player, he’s a guy that can control the game whenever he wants to, he’s so strong on his feet, he’s strong down low and very coachable.”

Devin Reagan made 32 saves to improve to a perfect 10-0 on the season.

The tight affair was Okotoks’ first overtime win of the season and just its second one-goal victory of the campaign.

Okotoks opened the weekend with its powerplay playing a major role in a comfortable 6-2 victory over the Wranglers Friday night in Sylvan Lake.

Bedard, Scott, Devyn Stewart and Evan Woods all lit the lamp in the first period with Austin O’Bray and Woods adding second period tallies to see out the result.

The Bisons were 3-for-6 on the man advantage.

“The powerplay has been clicking really well,” the coach added. “It’s coming down to better puck movement, quick puck movement, guys getting into the open spaces and we’re finally getting it locked into where we want people on the powerplay.”

Matt Baba came in relief of Reagan after the first period and stopped 21 of 22 shots.

“We came out to a fast start and just put the pedal down,” Beston said. “Reagan has been fighting a little bit of an injury so we put Baba in and he closed the door in the second and third and it was just a well-rounded hockey game.”

Okotoks, the only undefeated team in the HJHL, leads the loop with 66 goals and boasts four of the top seven scorers in Tyler Witzke, Scott, Woods and Alger.

The internal battle for playing time is fueling a strong sense of competition within the ranks for the tremendously deep squad.

“We still have to sit people every night so it’s internal battles to make sure you’re in the lineup day in and day out,” Beston said. “We have competitive practices which translate into a game.”

The Bisons look to keep the good times rolling this weekend with a home date versus the Red Deer Vipers on Oct. 25, 8 p.m. at the Murray Arena, before hoping on the bus on Oct. 26 to meet the provincial host Medicine Hat Cubs on Oct. 26.

“All roads lead through Medicine Hat to get to provincials, we know Medicine Hat will be a competitive team,” Beston said. “They want to show that they have the team to win provincials just as well as we do.

“Red Deer has a great team every year no matter how many kids they turnover and that will be a hard fought battle.”