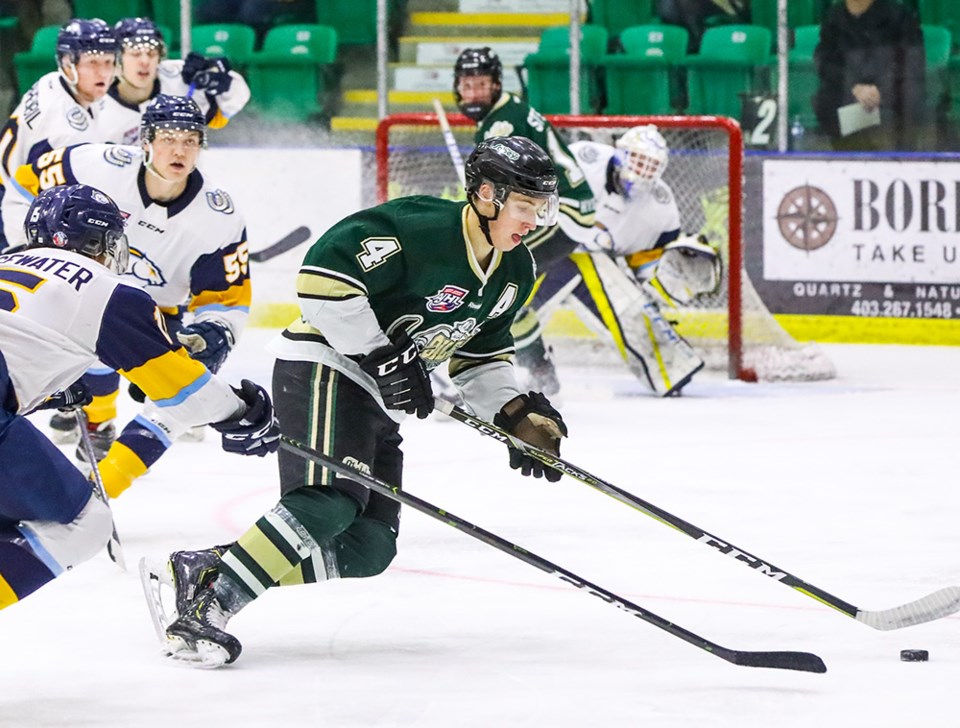 Okotoks Oilers forward Dylan Holloway, seen here in action for the Green and Gold in the 2018-19 season, was picked 14th overall by the Edmonton Oilers in the first round of the 2020 NHL Draft. (BRENT CALVER/Western Wheel)

Once an Oiler, always an Oiler.

University of Wisconsin sophomore forward and Okotoks Oilers alumnus Dylan Holloway was picked 14th overall by the Edmonton Oilers in the 2020 National Hockey League Entry Draft, held virtually Tuesday night and postponed from its original June date due to the COVID-19 pandemic.

"Obviously I was super pumped to be selected. Sitting there, I was patiently waiting for my name, I knew it's the NHL Draft and anything can happen," said Holloway, a standout Oilers centre from 2017-19, in a media Zoom call from Wisconsin on Tuesday. "My phone actually started blowing up before the pick so that's why my reaction was a little bit late on camera just because I didn't really know until after, but super excited for it.

"Obviously the Edmonton Oilers have a ton of history and are a great organization so that number one is why I'm super excited and also it's close to home, I've got a lot of family and friends from Calgary so pretty close to Edmonton ... I couldn't be more thrilled."

On the big club, getting the chance to potentially skate alongside the likes of Hart Trophy winners Leon Draisaitl and Connor McDavid is a pretty thrilling proposition for the 19-year-old.

"It's pretty crazy to think about, I know the past couple years I've been watching them really closely," Holloway said. "Edmonton has been one of my favourite teams to watch just because of them so the fact I could be teammates with them one day is pretty special."

In a draft year unlike any other, Holloway said he didn't feel hard done by to not be able to take in the typical draft day experience inside an NHL arena. The 2020 Draft was slated to be held in Montreal before its postponement.

"I definitely don't feel robbed at all, if anything this almost worked a little better," he said. "Because I was able to experience this whole process with my teammates and I've got a bunch of my family here tonight as well. I had more family and friends here than I would have had in Montreal in person, but obviously it would have been cool to put the jersey over my head and go on stage. But I'm super happy it worked out the way it did."

The 6-foot-1, 203 pound forward has also represented Canada on a number of occasions, earning the gold medal in the 2018 Gretzky Hlinka Cup, gold in the 2017 World Junior A Challenge while also skating in the 2019 U18 World Championships.

“In a league where speed is important he can really skate, he’s a big man,” said Edmonton Oilers general manager Ken Holland in a post-draft media availability. “I talked to Tony Granato (Wisconsin head coach) this week … and Tony spoke very highly of his character and his work ethic.

“So we’re adding a player that’s got tremendous character, work ethic, he can skate, he’s versatile, he can play left wing, he can play centre, and we think there’s more offence in there than he showed as a freshman when you look to what he’s accomplished in Tier II as a 17-year-old.”

Holloway's selection marks three straight years players with Okotoks ties were selected in the first-round of the NHL Draft, joining Bernard-Docker in 2018 and Peyton Krebs, an Okotokian selected by the Vegas Golden Knights 17th overall, in 2019.

He's also the second member of his family to be picked in the draft, his father Bruce having been selected by the Vancouver Canucks in 1981 draft.

More to come on this story.