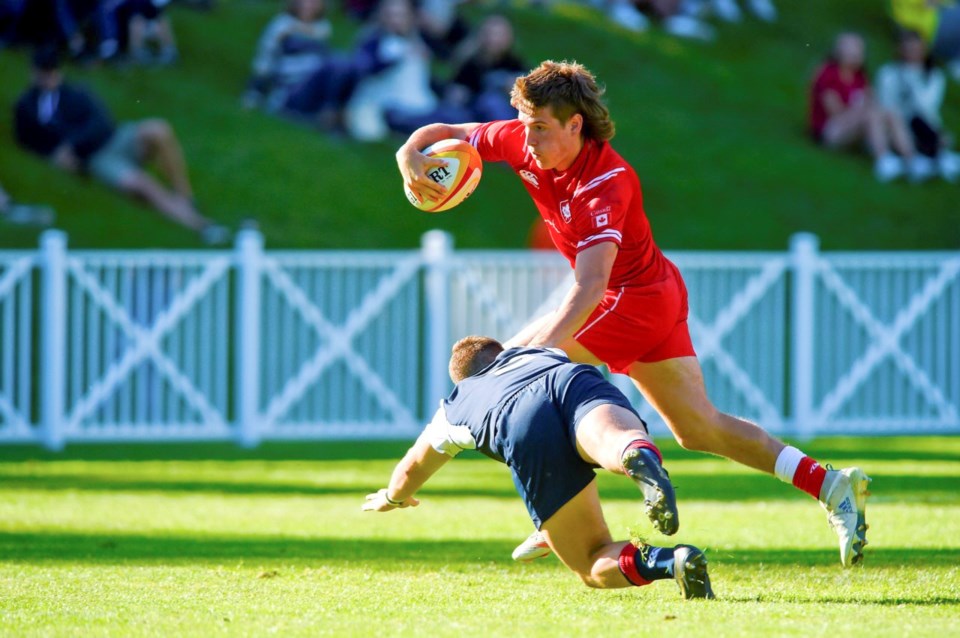 Okotoks' Thomas Isherwood, pictured in action for Team Canada at the U20 level, is now a carded member of Canada's Rugby Sevens squad. (Photo submitted)

Getting carded in a match is not typically a fortunate outcome, getting carded by the national rugby program much more so.

Okotokian Thomas Isherwood was rewarded for his efforts with the development program last season and since the start of September has been a carded member of Rugby Canada’s Sevens program on Vancouver Island.

“I played in England right after high school and then I came back and started training with the men’s team in 2019 and last season I joined the Pacific Pride program, it’s like the feeder team to the national team,” said Isherwood, a 2018 graduate of Foothills Composite. “And then here this season I got offered my contract, my card with the senior men’s so I’m officially with the team now which is pretty exciting.

“Through Sport Canada I get a bit more money, nothing crazy, but enough to live out here, for sure.”

Isherwood tipped his cap to his time with the Pacific Pride under head coach Jamie Cudmore, a decorated international player.

“He’s a very knowledgeable coach and probably one of the best coaches I’ve had throughout my time so far,” he said. “Just the learning and I’ve got quite a few friends out here now that I’ve played with, you feed off each other’s energy and skill level. I think everything just made me a better player.”

Isherwood, also a product of the Foothills Lions junior academy, missed out on a number of opportunities this summer due to mass sports cancellations amid the COVID-19 pandemic including chances to play teams in Bristol and Cardiff across the pond as well as a trip to Uruguay to play in the Americas Championships with Canada’s U20 squad.

But he didn’t let the time go by unfulfilled.

“It’s definitely not easy being in the middle of a pandemic, it’s the first time in however long that everything has been shut down,” he said. “But it’s almost been a blessing in disguise as well. I’ve been playing rugby basically three years straight and haven’t really had much of a break so I kind of had a couple months off without doing anything which was really nice for my body.

“Now that we’re back, the last three months I’ve been training really hard and put on 10 pounds of muscle and I found I learned a bit more about myself as a great way to advance in my rugby career.”

After being restricted to gym training during the summer months, the Canucks have resumed typical training four to five times per week along with time on the field every day.

“It’s just an awesome experience to get to train with the national men’s team, really, it’s kind of surreal,” Isherwood said. “Showing up at the training facility, which is pretty phenomenal because it’s brand new, just training around those guys and their skill level and what they bring to the table, it definitely improves your game in every single way.

“When you’re in training and you’re playing against each other against some of the top 7 to 12 guys in Canada, it’s a pretty crazy experience.”

Isherwood, who cuts a slight figure by rugby standards, said the sevens game suits his skill set better than the traditional fifteens rugby.

“If I’m playing a fifteens game I’m definitely one of the smallest guys on the field. My best friend is a 6-foot-4 Tongan and he’s 270 pounds so he makes me look a bit small,” he said with a laugh. “When I got to sevens it’s much more of a speed game, skill game so I feel like I have a bit more of an advantage.

“I enjoy having the ball in my hand and being able to control the game and the open space, sevens is just a much faster-paced game.”

Going forward, it’s about competing for coveted spots on the sevens squad when major competitions get underway again including the high-profile HSBC World Rugby Sevens Series as well as the Olympics and Commonwealth Games.

“This season they’ve cancelled most of the tournaments due to the pandemic which is unfortunate,” he said. “I think the next one is in April so I don’t think I’m really going to get much game time this year just because the Olympics are at the end of that (season) as well. But of course my goal is that I would love to play for my country again and get to travel the world with the Sevens Series and hang out with the boys.

"That would be awesome.”