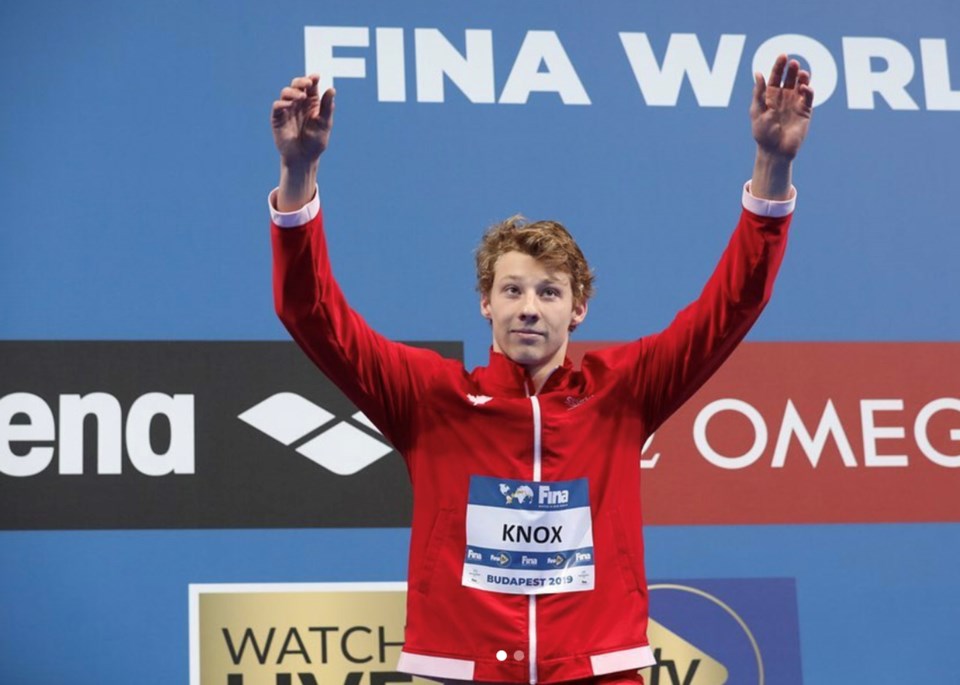 Finlay Knox, seen here at the FINA World Juniors in 2019, was named Canada's Male Swimmer of the Year for 2020 by swimming publication SwimSwam. (FINA/File Photo)

In a year with little race action an Okotokian made the most of his time in the pool.

Finlay Knox capped off a brilliant record-setting season by earning the Swammy Award as SwimSwam Magazine’s Canadian Male Swimmer of the Year for 2020 after starring at the International Swimming League stop in Budapest.

The Okotoks Mavericks Swim Club alumnus told the Western Wheel racing as opposed to training is where he tends to excel.

“I love going to these really big competitions, going in I know I’m not the fastest, not the tallest, not the biggest athlete there,” said Knox, in a November interview with the Western Wheel. “Before you head out, normally you’re pretty nervous because there’s so many great athletes, they’re absolutely crazy, training animals and just think they’re superhuman.

“Once you get there, you realize there’s nothing really special with them. They work hard and they swim fast. That makes everything feel a lot better because you can go back and think they’re training hard so I’m training hard. I know I can compete with that.”

The online and print publication cited Knox's breakthrough performances in the International Swimming League as a member of the Toronto Titans during the condensed bubble season in the fall in Budapest, which served as the highest level of swimming competition during a season marred by cancellations and postponements.

Knox helped the Titans qualify for the ISL semifinals in which he set a pair of national records on consecutive days in the 100m and 200m individual medley.

The Foothills Composite graduate obliterated his own national mark of 1:55.10 by touching the wall in a time of 1:53.67 to set a new Canadian best in the 200m IM semifinals.

Knox, a Youth Olympic Games bronze medallist in 2018 and FINA World Junior silver medallist in 2019, contributed 47 points to the Titans team standing at the ISL bubble season in the fall.

The 19-year-old is training with the nation's top swimmers at Canada's High Performance Centre in Toronto with an eye on qualification for the 2021 Olympic Games.

Those also up for the Swammy award and listed as honourable mentions were Markus Thormeyer, who set a Canadian record twice in the 200m backstroke; Alberta’s own Cole Pratt who broke an 11-year-old national benchmark in the 100m backstroke and Canadian swimming legend Brent Hayden, a 2012 Olympic bronze medallist, who returned to the sport after retiring for seven years.

Past winners of the award include Thormeyer, Yuri Kisil, Santo Condorelli and Olympic medallist and long-distance specialist Ryan Cochrane.

SwimSwam is a print and online news organization that covers competitive swimming around the globe.