Okotokian is Canada's King of the Mat 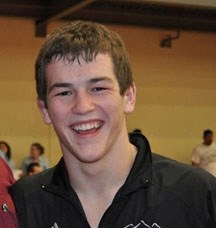 An Okotoks wrestler is the King of the Mat.

Reid Watkins had a perfect 6-0 record at 74kg for Team Alberta en route to winning the Stu Hart King of the Mat tournament in Milton, ON, on Jan. 8.

However, for the first time in the 2010-11 season he actually gave up some points and even lost one round. Regardless, the victory means Watkins has qualified to wrestle for Canada in Japan this summer.

Watkins hadn’t given up a point all year going into the meet, but he ended up losing one round in a win over a wrestler with Team Japan en route to the final. It was the first time Watkins had wrestled against a Japanese wrestler.

“The Japanese wrestler was amazingly quick,” Watkins said. “They also wrestle very internationally. He stayed low and was relaxed.”

Watkins won the first round 2-0, but he lost on a count back in the second round.

“It was good for me because you learn more from losing than you do from winning,” Watkins said. “He forced me to adjust my style, which will make me a better wrestler.”

Watkins had a slight delay in one of his moves and the Japanese wrestler was able to capitalize and hit the Okotoks wrestler with a single-leg takedown to score two points en route to winning the second round.

“I had a delay of just a split-second and he was able to take advantage of it,” Watkins said. Watkins won the match by outpointing the Japanese wrestler 4-0 in the decisive third round.

Watkins said his key match was when he came up against Roy Miller of Team B.C. as both wrestlers had a 3-0 record when they stepped onto the mat.

“I was able to beat him 2-1 in the first round and then 3-0 in the second round,” said Watkins, a Grade 11 student at Holy Trinity Academy.

Watkins said he wrestled somewhat conservatively at the King of the Mat because of an injured shoulder.

Wrestling at the King of the Mat, which is dedicated to Calgarian Stu Hart of Stampede Wrestling fame, was an experience Watkins won’t ever forget.

“It was a great tournament because these were the top wrestlers in Canada,” Watkins said. “It was definitely a high quality meet.”

The King of the Mat tournament consisted of six teams, Alberta, Saskatchewan, Japan, British Columbia and two from Ontario wrestling against each other in the respective weight divisions.

Watkins was the lone Albertan to win a gold medal at the King of the Mat.

The Okotoks Wrestling Club will send six wrestlers to the Western Age Class championships in Kamloops, BC this weekend.

Those wrestlers include Watkins, 76kg; Cody Thompson at 69kg; Thomas Kurth, 76kg; and Dillon Thompson, 92kg. The two foothills area girls heading to Kamloops are Cassidy Barnert at 65kg and Abbi Watkins who will wrestle in the 52kg division.

Okotoks wrestling coach Doug Watkins said all of the wrestlers are capable of finishing in the top six.