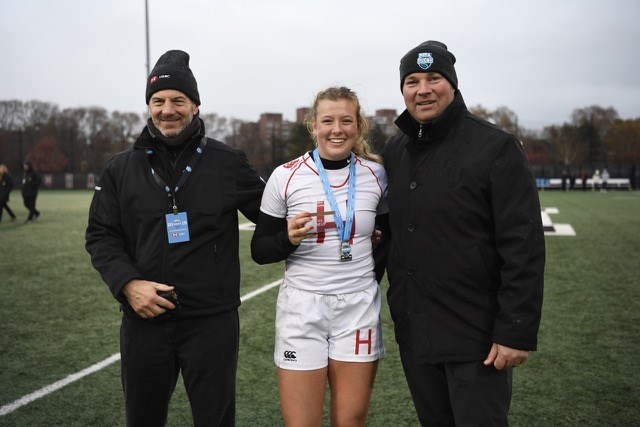 National champion, All-American and top collegiate player nominee – not bad for a freshman.

Okotokian Brogan Mior enjoyed a rookie year to remember as a Harvard University freshman, helping the Crimson to the National Intercollegiate Rugby Association title while being named an All-American, the top No. 12 – inside centre – in the country and being the only first-year player to pick up an MA Sorensen award nomination for top collegiate player.

“It’s honestly the most amazing moment of my life,” said Mior, a 2019 graduate of Foothills Composite High School, on the national title. “I’m so honoured to be able to play with that group of girls, there’s so many seniors on my team who I really connected with and knew I was going to miss in the coming years.

“As a freshman to be able to play with that group of seniors and win with them was truly an honour.”

Likewise for the individual accolades as Mior, who saw action at inside centre, full back and her most natural position at fly-half, made an immediate impact south of the 49th parallel.

“Being named to that was a really great achievement after I had put in the work all season.”

Harvard beat out Army 18-7 in the national final with Mior earning game MVP honours for the Crimson. The Cambridge, Mass. school edge Ivy League rival Dartmouth 23-22 in the semifinal to advance to a showdown versus the No. 1 ranked Army squad.

“I think because Dartmouth is Harvard’s biggest rival we kind of get in our heads about playing them and there are definitely nerves because we want to beat them so bad,” she said. “We were mentally tough that game and overcame some challenges so we could win.

“Either way the (final) was going to be played on Harvard soil so we really wanted to make sure that we could win so that we could play at home. The semifinal we saw there was so much more that we could improve on and we hadn’t reached out peak yet.

“The week leading up to our national final was very intense. The girls were working really hard so that we could peak in the national final and we definitely did that.”

In recognition of her work with the fifteens squad, Mior, was voted newcomer and rookie of the year by her Harvard teammates.

“I knew Harvard had been developing the last couple years, they had a really successful year the year before so I was just hoping to have a successful season with the girls,” she said.

“The girls just loved to spend time with each other. That was one of the best parts of my day, getting to cross the river and spend time with those girls and I think we were just as close off the field as we were on the field and that allowed for us to work together really easily in games and practices.”

Mior credited the team and the university community at large for getting her used up to speed on the rigours of student-athlete living at one of the world’s most prestigious academic institutions.

“It definitely is intimidating because you’re surrounded by the smartest people, but rugby (wise) I felt pretty comfortable, I knew some of the girls already,” Mior said. “Some of the freshmen and one of the sophomores as well, I played against her for Team USA. So I already did my official visit and the girls were amazing, the coaches were amazing.

“So I knew it was a place where I felt pretty comfortable already and I knew before I got to college that I had 40 girls that I could rely on.”

Prior to the second semester, she represented Team Canada’s U18 squad in the Can-Am competition with the United States in California over the Christmas holidays.

Despite battling strep throat, the Foothills Lions rugby product came off the bench to help Canada erase a second-half deficit to edge the hosts by a 29-24 score.

The Crimson’s sevens rugby season was set to launch in March before the COVID-19 pandemic struck with the school cancelling in-person classes and sending its students home in short order.

“We were just about to start our sevens season and I think we were on the road to another national championship in sevens,” said Mior, a pre-med student focusing on human evolutionary biology and women and gender studies. “We had a really strong squad so it was really unfortunate when the coronavirus happened and we weren’t able to play.”

If year one is any indication, there should more and more opportunities for silverware.

“It was a pretty big shock going from high school (at Foothills Composite) to college and playing a varsity sport and having to balance my school work and practices and everything,” she said. “But the team really helped me to transition and guide me through going into college and managing my work. Also Harvard has some of the best resources, there’s a lot of help and if you reach out they will give you assistance.

“That really helped me transition.”