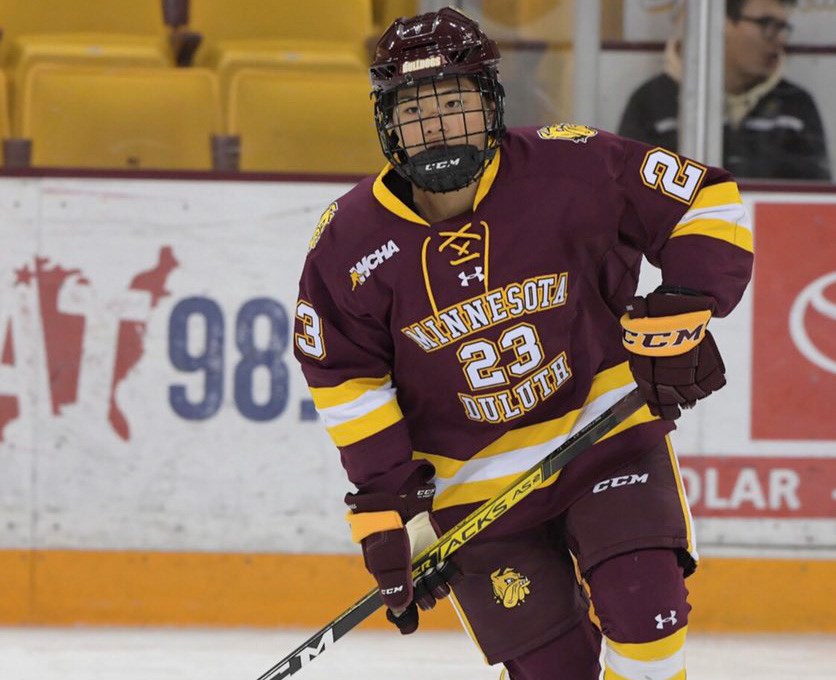 Okotoks’ Kassy Betinol, seen here with the University of Minnesota Duluth Bulldogs, was one of 50 players named to the National Women’s Team Development camp. (Photo submitted)

A summer unlike any other will take on a first for an Okotokian.

Kassy Betinol earned her first invite to Hockey Canada programming as one of 50 players named to the National Women’s Development Team Summer Camp.

“It’s super special,” said Betinol, coming off her rookie season with the University of Minnesota Duluth Bulldogs. “I’ve never really been involved with Hockey Canada before so when I got that email I was honestly pretty surprised and mostly excited.”

One of three Albertans on the roster, Betinol and the virtual camp attendees have been meeting once or twice a week over the past month with sessions on topics ranging from nutrition to fitness to mental performance.

“Each meeting has been focused on something different, but everybody working with Hockey Canada is extremely experienced and knows what they’re talking about,” Betinol said. “So it’s been really cool just to listen in and take notes on what they’re saying. The biggest one I think is mental performance and the things to do to help out with that.”

Betinol, a Canada Winter Games gold medallist in 2019, had 2 goals and 4 points for the Bulldogs in the 2019-20 campaign after getting off to a hot start on the ice.

“We were in Buffalo, New York for the Ice Breaker Tournament, that’s where I scored my first two goals,” she said. “And in those moments it really set in that ‘wow I’m really here and have made my dream come true.’ And it was that weekend where it set in that, yeah I can actually play at this level and play with all the amazing players in our league, in the NCAA.”

More important was the lessons she picked up from her experienced teammates on the Bulldogs, five-time NCAA women’s ice hockey champions and the eighth ranked team in the country in 2020.

“This season I was able to sit back and play a smaller role and just watch a lot of my teammates who’ve been involved with national programs before,” she said. “It was a really good experience for me. It was really cool just to sit back and watch them and try to mirror their image and follow in their footsteps and try to get where they are.

“…It’s unfortunate the (in-person) camp was cancelled this summer, but getting that email brought me a lot of confidence and made it even more real to me that I could go farther than the NCAA and could make it onto the national platform.

“I’ve just got to keep working for that and I’m really excited for whatever’s coming.”

Betinol isn’t the only Foothills hockey talent part of the Team Canada program this summer.

Earlier in the month, Hockey Canada released its 41-player roster for the national junior men’s development camp with Okotoks’ Peyton Krebs, the captain of the WHL’s Winnipeg Ice, along with Bragg Creek’s Dylan Holloway, a former Okotoks Jr. A Oilers standout now at the University of Wisconsin, both named to the camp.

Krebs, the Vegas Golden Knights first-round pick in 2019, missed out on last year’s World Junior roster shortly after recovering from injury. Holloway, a 2001 late birthday, is expected to be picked in the first-round of the 2020 NHL Draft.

The July 27-31 virtual camp will have a plethora of sessions on player development in preparation for the 2021 IIHF World Junior Hockey Championships which are slated for Edmonton and Red Deer in late-December.

For more information go to hockeycanada.ca