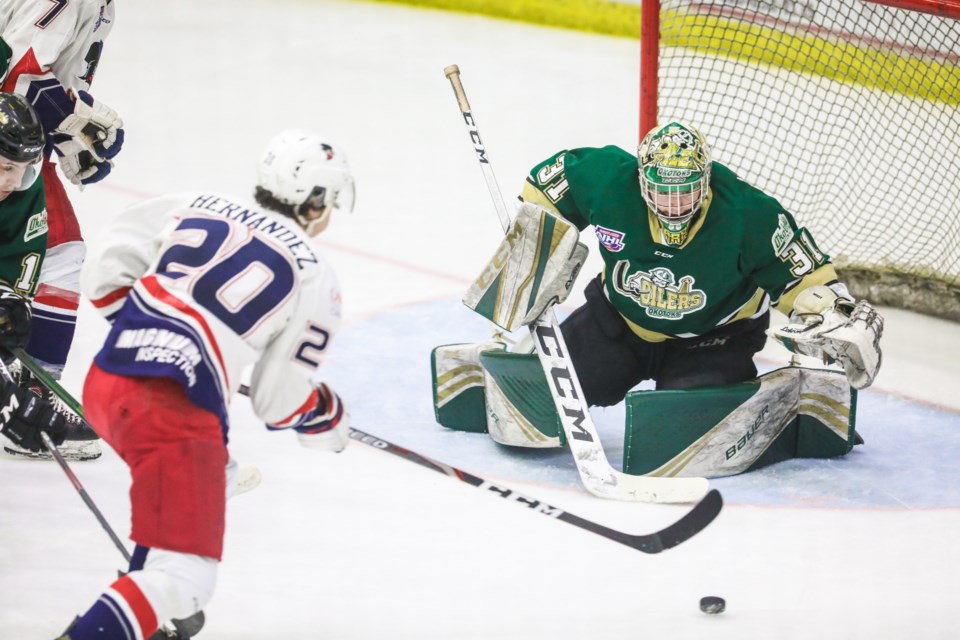 One of the best hockey rivalries in the province is about to get reignited.

The Alberta Junior Hockey League announced the beginning of its exhibition season over October, a slate which will see the Okotoks Oilers and Brooks Bandits meet six times as a two-team cohort over a 15-day period.

“We’re beyond excited,” said Oilers captain Louis Jamernik. “It’s great to play against high calibre players throughout this whole month within our team, but the reason why we play is to compete like that. Playing a team like Brooks that has a similar level of skill is going to be huge for us.

“In our minds, we’re approaching this like a South Final playoff series. We’re going to be going as hard as we can because we haven’t played for so long. I think it’s been over six months so it’s going to be all guns blazing.”

The exhibition series begins this weekend in Brooks on Oct. 9 and at Okotoks’ Pason Centennial Arena the following night.

Okotoks and Brooks have been the class of the AJHL South Division over the past decade with the foes meeting in the third-round over the past three playoffs that went ahead. The 2019-20 post-season was cut short before both teams had a chance to skate in the second-round.

“That’s going to be great,” said Jamernik, who played his rookie season in Brooks. “I think it’s going to get more and more chippy as the games continue, but it will be just like a playoff series which will be good to gauge where we’re at as a team and stack up against another elite team like Brooks.”

After focusing on fine-tuning individual skills over the development season since the beginning of September, this first week of October will mark the introduction of more systems play for the Green and Gold.

“It’s been a lot of fun, we’ve taken advantage of this developmental time and done a lot of team builders and really gelled as a group and the new guys don’t even feel like new guys anymore,” the captain added. “We’re just a team already, we’re ready to go. We haven’t worked a ton on tactics yet, that will come this week, but just in terms of compete and skill wise we’re already at that elite level we want to be at.”

Jamernik said this year’s version of the Oilers has a similar dynamic to year’s past under the direction of head coach and GM Tyler Deis and associate coach/director of sponsorship Kyle Schussler.

“Deis and Kyle, they always like to craft a fast and hard working team and this year it’s going to be the same, lots of speed, very physical and grind and grit and put the puck in the net,” he said.

The series continues on Oct. 16, 17, 23 and 24 with each team hosting three games, the Oct. 16 and 23 dates at Pason Centennial Arena. The rules around arena protocols for spectator capacity and physical distancing measures are at the discretion of not the AJHL, but provincial health regulations and local municipalities.

Currently, there’s a max of 100 spectators for indoor events/settings in Alberta.

Given the allocation of seats to team staff, off ice officials and athlete parents there’s limited seating available, said Schussler on Oct. 6.

“As of right now the guidelines have us for a 100 person capacity within the bowl seating,” he said. “That’s what we would have to work with and that would include all of our staffing and volunteers and what not as well. Parents will have the first chance with tickets just to see how many want to be there and come into that game and it would be very limited thereafter.

“I’m not 100 per cent sure yet on if we would be able to open it up to season ticket holders yet, but we do have a few games that are aligned and coming together now with our schedule so hopefully we will get some of those things rectified moving forward.”

Some of the other measures in place will include limiting certain sections of the arena to seating, rows that will be tapped off to enforce physical distancing as well as directional arrows in the arena.

“It’s to make sure we’re doing everything we can to abide by the guidelines,” he said. “And do it right the first time around.”