Oilers get another shot after Showcase split 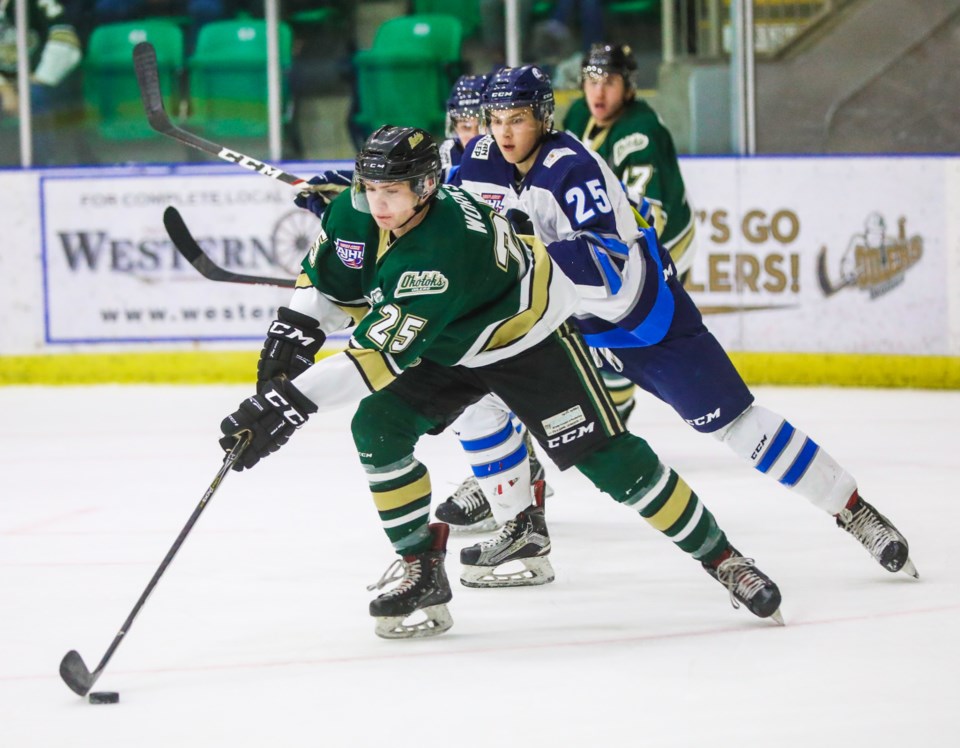 After showcasing mixed results the Oilers get a redux on home ice this weekend.

The Okotoks Oilers get another crack at the Grande Prairie Storm and Sherwood Park Crusaders at Pason Centennial Arena after splitting two games with the North Division teams at the AJHL Showcase, Sept. 27-28 in Camrose.

“GP we held them to 0 shots in the first period,” said Oilers alternate captain Marc Pasemko. “We played really well and showed ourselves that if we work hard in the d-zone, what we can do.

“Sherwood Park was a test to see where we’re at. We struggled a bit in the d-zone, they’re pretty fast and they move the puck, but as the game went on we made changes and showed we could compete with them.”

Okotoks fought off two separate two-goal deficits and briefly had the lead in the third period. Carter Savoie completed the hat-trick for the CRU in what held up as the game-winner.

“They’ve got a good first two lines, they’re really fast and move the puck well and a good defence too,” said Oilers captain Ayden Roche-Setoguchi. “I thought we competed well against them. Just got to get the pucks deep and cycle it down low.

“I’m pretty excited to play those guys again. We’ll be better next time.”

Roche-Setoguchi, Eric Parker and Carson Dyck notched their first goals of the season for Okotoks while Pasemko and Louis Jamernik added the other markers.

“In the offensive zone they’re just constantly switching, they get lots of pucks to the net and they’re very quick in transition,” Pasemko added. “As soon as you turn it over they’re up and in your zone. Even in the defensive zone, they’re aggressive they’re hounding you constantly.”

Okotoks had Grande Prairie on its heels in a smothering 4-1 performance to open the Showcase on Sept. 27.

The Oilers allowed just 13 shots on goal, none in the first period. Ashton Abel had a quiet night in goal, picking up his fourth win of the campaign.

At the other end of the ice, Jack Works paced the offence with two goals, Jamernik and Pasemko also tickled the twine with Zane Kindrachuk and Tanner Sawka each chipping in with two assists.

“I think we just played a simple game, hit them lots and got pucks deep,” Roche-Setoguchi said. “Our forwards did a really good job of sustaining pressure down low and our defence were just making the right plays.”

The annual showcase weekend assembled all 15 teams in the AJHL with three days of action at two rinks in Camrose. The event is very much geared towards the scouting community both in Canada and the U.S. as they get eyes on all the players in the league in the same spot.

It’s a scenario that takes some getting used to.

“But you get your first shift and just get your feet moving.”

This weekend, Okotoks welcomes the Storm on Oct. 4 and the Crusaders on Oct. 5. Both games are 7 p.m. starts at Pason Centennial Arena and the latter match-up in particular offers the Green and Gold a shot at redemption.