“Obviously it’s bigger than hockey and that makes it not as tough knowing it’s not just us that aren’t able to play, everyone else can’t play hockey right now either and it’s affecting people’s work and lives and way more people than just us.”
Mar 17, 2020 2:37 PM By: Remy Greer 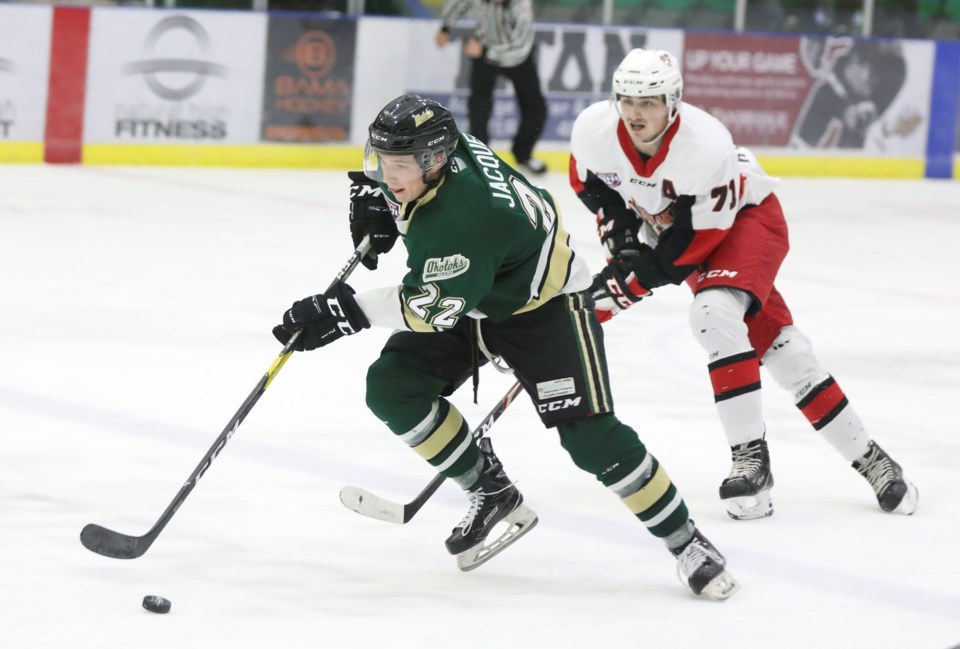 The Okotoks Oilers and Camrose Kodiaks second-round playoff series was to get underway on March 14 before Hockey Canada's mandate to cancel all sanctioned events in the wake of the COVID-19 outbreak. (Brent Calver/Western Wheel)

Understandable, reasonable and yet still a tough pill to swallow.

The Okotoks Jr. A Oilers post-season was shut down before it even started due the outbreak of the COVID-19 virus and Hockey Canada’s cancellation of the sport just over 24 hours before the top team in the Alberta Junior Hockey League South Division was set to embark on its playoff journey on March 14 against the Camrose Kodiaks.

“Friday we came to the rink and by then we all heard we weren’t practising,” said Oilers alternate captain Zane Kindrachuk. “We just had a meeting and we found out that day. Originally we thought we were going to postpone and we still had something to look forward to.

“When we found out it was being cancelled completely it was hard to hear that, especially with the season that we were having and we were all looking forward to the playoffs getting started.

“Obviously it’s bigger than hockey and that makes it not as tough knowing it’s not just us that aren’t able to play, everyone else can’t play hockey right now either and it’s affecting people’s work and lives and way more people than just us.”

Hockey Canada made the announcement on March 12 it would be cancelling all sanctioned events until further notice. By midday on March 13 the CJHL confirmed that there would be no post-season after some in the sport were holding out hope a postponed playoff could happen down the road.

“Everyone was pretty upset because we expected to be playing Saturday, we had been practising the last three weeks hard, working our tails off to get ready for it,” said Oilers alternate captain Marc Pasemko. “On Friday our coaches and (governor) Wayne Lauinger came and talked to us and explained everything. We kind of knew it was coming, but everyone was pretty emotional, myself included. Within 24 hours, the last year of my junior career was over.

“It was just a huge shock to everyone. I couldn’t even put together a sentence.”

Okotoks, which posted its second best finish in franchise history during the 2019-20
regular season with 47 wins and 98 points, entered the post-season as one of the favourites to make a run at a first AJHL championship.

For graduating players Ayden Roche-Setoguchi, Liam Freeborn and Pasemko along with those moving to college hockey in Eric Parker and Noah Kim, it’s a particularly difficult way to part ways with the Green and Gold.

“It kind of sucks because this group won’t be able to play together again,” Kindrachuk said. “This group, we were really deep, we had a good four lines, good six D and two really good goalies.

“As well, off the ice and in the dressing room everyone was super close with each other and got along really well and it was a lot of fun going to the rink and hanging out with the guys every day.”

Pasemko, who’s sixth all time with 167 games played and is tied for third with 153 points over three seasons, is the longest serving member of the squad to be moving on. The Edmonton native is a commit to Colorado College next fall.

Hockey, as trivial as it might be in the grand scheme of things, is a way of life for the players.

“It’s a weird feeling, it’s almost like the world is ending.”

Along with Hockey Canada’s decision, more and more mandates have been declared by Alberta Public Health with regards to not holding events with more than 250 attendees as well as the cancellation of classes at K-12 and post-secondary schools in the province.

Late in the evening on March 15, the Town of Okotoks also announced the closure of public facilities including the home of the Oilers – the Pason Centennial Arena.

The memories made in that building over 2019-20 is what will last.

The list of accomplishments includes the South Division regular season title in a dramatic surge in the second half to pass the Brooks Bandits along with six nominations for league awards and the likes of Jack Works setting new club benchmarks in goals, 43, and points, 92.

“I think the biggest thing I will take away is people doubted us at the start of the year because we lost those big name players,” Pasemko said. “I think we just used it as fuel to make us what we were at the end of the day, a great and strong hockey team.

“That’s going to be one of the big memories I take away is the adversity we faced and guys like myself, Works, Kindrachuk and Jammer (Louis Jamernik) and all these other guys stepping up to the plate and making a name for themselves.

“And it’s just the friendships you make with your teammates, me and Kindy have been together for three years playing together. It’s friendships that will last the rest of my life.”