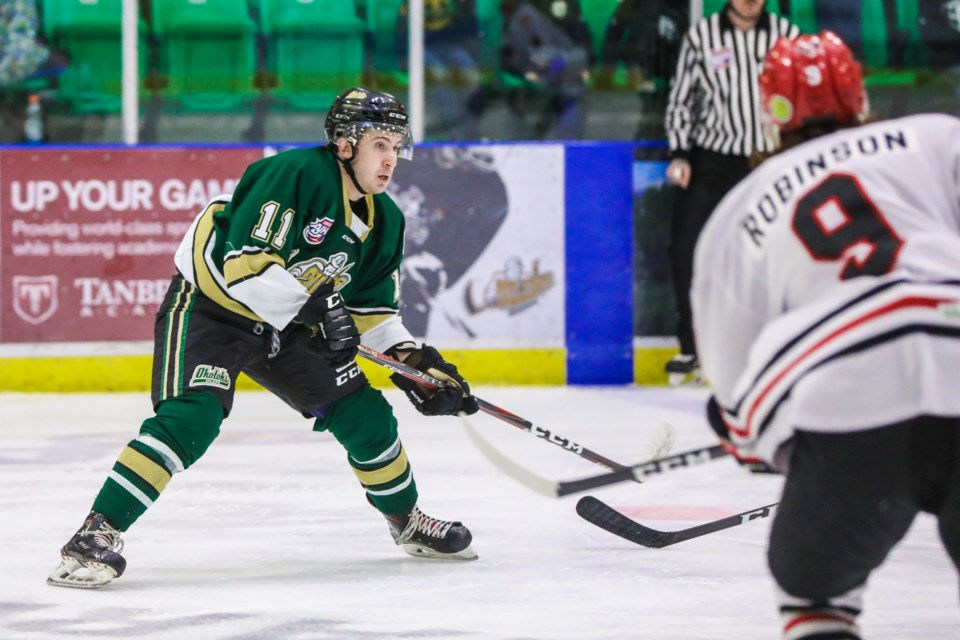 The Okotoks Oilers hope to be a tougher team to match-up against going forward.

Okotoks added WHL veteran Brandon Machado and acquired 1999-born winger Liam Freeborn in a three-team transaction that sent forward Joel Krahenbil to the Calgary Canucks and defenceman Spencer McHardy to the Humboldt Broncos to cap a busy week in advance of the Dec. 1 roster cutdown deadline.

“We just wanted to create a little more depth up there,” said Oilers head coach Tyler Deis. “We got a veteran presence. It’s going to take a little bit of time here getting used to everything with Freeborn and with Machado.

“They haven’t been playing in a while, but we’re excited to see where these guys come from and can be with our team right now.”

Freeborn played 16 games with the Trail Smoke Eaters, last suiting up in late October, before being traded to the Surrey Eagles and then the Canucks on Nov. 11.

The 2000-born Machado, a veteran of 129 games in the WHL over parts of three seasons with Saskatoon, Kootenay and Swift Current, skated in 11 games this seasons with the Broncos – most recently in late-October — before joining the Oilers.

“They’re all really welcoming and it’s kind of easy to hop in and figure out the systems, get accustomed with the coaches ways and the teammates in the dressing room.”

The Airdrie native formerly played under Deis in spring hockey and Oilers assistant coach Reid Hnatowich dating back to Bantam AAA in Airdrie.

“He used to play with a lot of moxie and a lot of intensity,” Deis said. “And that’s one thing that we want to get him back into the game, back enjoying the game a lot more.

“If he starts doing that he can be a hell of a player.”

The 5-foot-10 forward plays an abrasive style and was a key cog in the last CFR Bisons team to play out of Strathmore in 2016-17, playing alongside the likes of Okotokian Peyton Krebs and Millarville’s Zach Huber.

“I just want to get back to how I was growing up,” Machado said. “The past couple years haven’t gone the way I wanted them to. So I just want to be one of those guys that can be leaned on in any situation whether it’s scoring a big goal or being on the ice in the d-zone for a face-off or just to block a shot.”

Freeborn skated with a number of Oilers players as members of the Calgary Mustangs — the likes of captain Ayden Roche-Setoguchi, defenceman Noah Kim, forward Mitchell Watson and goaltender Ashton Abel — to name a few.

“I haven’t been in the game for a while so it’s exciting to be back. I know I can play in this league and do pretty well,” Freeborn said. “Right now I’m going to try to work my way into the team and find my place in the room and hopefully I can bring some good offence to the team.

“It’s my 20-year-old year, my last year, and I wanted to be on a team that was going to go a long way and I think this team has something really great going here and I’ve got no doubt we’re going to make it pretty far here.”

The 6-foot-1, 185-pound right winger is a proven commodity in the AJHL with 80 points in 109 games with the Mustangs and Fort McMurray Oil Barons.

“Freeborn, I’ve coached against him for a long time here and know exactly what he brings,” Deis added. “He knows the guys in the room and he’s a guy that just kind of strengthens that room, it’s a positive thing.”

“The fans can expect a power forward who’s going to get into the dirty areas and try to get the puck to my teammates as much as I can and try to create some offence and help us win some games down the road,” Freeborn said.

Okotoks (24-4-2) rebounded well from a rare home loss to split its weekend homestand.

Following a 6-2 defeat to the Bonnyville Pontiacs on Nov. 29, the Oilers got back to their winning ways by dispatching the Whitecourt Wolverines 5-3 the following night.

“I haven’t seen a game like that with the team, but it’s all right and I wanted to make sure we rebounded well with a positive attitude coming back into it,” Deis said. “I thought they did a good job. I thought we dominated the play, I think their goalie held him in there and I thought we controlled the game.”

Okotoks out-shot Whitecourt 41-18 with the score perhaps flattering the visitors.

Machado opened the scoring on a rebound tally after a strong shift with linemates Carson Dyck and Brayden Morrison just 4:10 into the contest.

“I’m playing with some great linemates right now,” Machado said. “Mo took it hard to the net and it was laying in front and I just tried my best to get it around the sprawled goalie and put it in.

“It was nice to get the first one of the game and get us going.”

Ice Chips … Okotoks’ depth up the middle could be tested to start December. Centres Jack Works and Louis Jamernik were named to the evaluation camp for Team Canada West for the World Junior A Challenge. The camp runs Dec. 1-3 at WinSport in Calgary. The WJAC opens Dec. 7 in Dawson Creek, B.C.